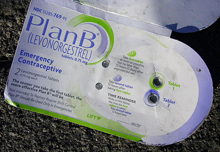 Health care workers who have a moral or religious objection to a medical procedure can't be punished or discriminated against if they refuse to perform it, according to a sweeping new rule (pdf) announced by the Bush administration yesterday.

The right-to-refuse rule includes abortion, but [the department of Health and Human Services] said it extends to other aspects of health care where moral concerns could arise, including birth control, emergency contraception, in vitro fertilization, stem cell research or assisted suicide. The rule will take effect the day before President George W. Bush leaves office

If a hospital, clinic, pharmacy, health plan, or any other medical establishment refuses to follow the new law it will forfeit all federal funding. The rule has been eagerly anticipated by anti-abortion activists, but has raised furious objections from family planning groups and much of the medical establishment (groups such as the American Medical Association and the American Hospital Association opposed the regulation).

Officials at hospitals and clinics predicted the regulation will cause widespread disruptions, forcing family planning centers and fertility clinics, for example, to hire employees even if they oppose abortions or in vitro fertilization procedures that can destroy embryos. "It is going to cause chaos among providers across the country," said Cecile Richards of the Planned Parenthood Federation of America. The regulation could also make it difficult for states to enforce laws such as those requiring hospitals to offer rape victims the morning-after pill, experts said [Washington Post].

President-elect Barack Obama's transition team is reportedly reviewing the rule as well as several other abortion and reproductive-health rules issued during the Bush administration. However, it won't be easy to reverse this new rule; either Congress will have to pass a law repealing the regulation, or the new staff of the Health and Human Services Department will have to begin the lengthy rule-making process all over again. Advocacy groups are raising passionate arguments for and against the rule, with anti-abortion groups maintaining that the rule supports religious freedom and pro-choice groups arguing that it undermines patients' rights and could threaten women's health. Meanwhile, mainstream medical groups say that religious arguments shouldn't enter into the debate, and say they object to the rule because it second-guesses medical standards of professionalism.

The American Nurses Association says it already has a code of ethics in place. The group believes patients should make the decisions on care based on their own beliefs -- not those of the health-care provider. "We don't make God-like decisions. ... That's not what it's about for us. It's about helping the patient make their own decision," said Mary Jean Schumann, director of nursing practice and policy for the ANA. "No one appointed us to be the ultimate person to pass judgment" [CNN].