Fear of Needles Is a Real Thing. Here's How to Overcome It

If you're embarrassed to admit it, don't be — trypanophobia, a fear of injections, is more common than you think. And there's never been a more perfect time to conquer it. 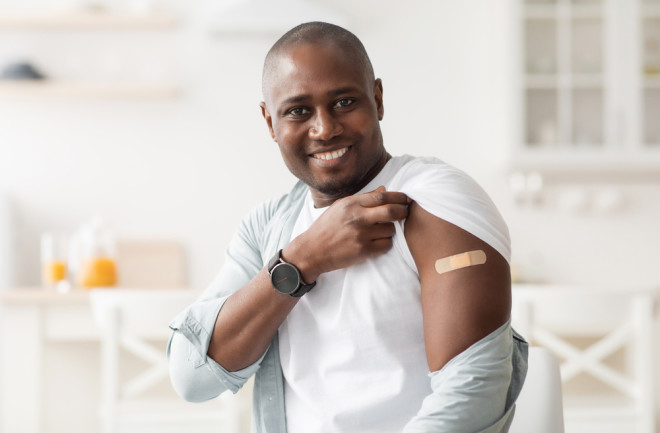 Getting a COVID-19 vaccine will require an injection. For some people, the thought of confronting a needle might be too much to bear, even if there’s a cultural pressure not to talk about it. “We dismiss people’s concerns about needles,” says Anna Taddio, a pharmacy scientist at the University of Toronto, “so it’s not something to talk about or admit publicly.” But about two thirds of kids and a quarter of adults have some kind of reservations about needles. Within that group, another five to 10 percent of people have extreme anxieties and fears.

Though someone might stress about needles while also doubting what’s inside the syringe, fear of the pointy tip alone can dissuade someone from getting themselves or their children crucial shots. At the same time, it’s relatively easy to avoid creating fear in kids and move past minor reservations people might have. “If that’s the one reason you’re not getting vaccinated, we have ways to help you with that,” Taddio says. And if there’s ever a perfect time to put all the needle fear management tools to work, it’s during a vaccine drive crucial to ending a pandemic.

Needle fear runs a wide range. For most people, the feelings kick in once they’re at the doctor’s office and waiting for the shot. At the other end of the spectrum sits a small percentage of the population that qualify as having blood-injection-injury phobia, a diagnosis of disproportionate fear of any of those three items. For these individuals, their struggle with needles starts long before someone makes an appointment — and can be the reason someone never schedules a vaccination in the first place. “If I’m really anxious about needles, thinking about my doctor’s office might get me worried,” says Meghan McMurtry, a psychologist at the University of Guelph. Once at the doctor’s office and anticipating the injection, fear can become overwhelming. People might find themselves trying to escape, getting dizzy, or fainting.

Read more: Afraid of Needles? You May Want to Blame Your Genes

Research suggests that about four percent of the U.S. might receive this diagnosis, but it’s possible the actual number of people whose fear gets in their way of a calm needle encounter hovers around 10 percent, McMurtry says. Intense reactions to needles can cause immediate problems in clinics. Fighting to flee might lead to accidents, while fainting becomes dangerous if someone hits the floor hard. But needle fear often carries consequences beyond the initial doctor visit.

For starters, people who are afraid of needles might just, well, avoid them. When Taddio and her colleagues surveyed people in 2012 about needle fear, 7 percent of parents and 8 percent of children said needle fear was the primary reason they put off getting vaccinated. People with poor injection experiences might dodge healthcare scenarios later in life that involve needles, a choice that can grow to encompass a range of other medical visits.

In some cases, a parent’s queasiness about needles translates to their behavior with their kids. Timothy Callaghan, an expert on health policy and politics at Texas A&M University, and his team surveyed parents about their degree of needle fear and their attitudes towards a range of vaccination protocols for kids. Those who were most sensitive to needles were 16 percent more likely to have chosen a doctor based on the physician’s willingness to delay vaccinations. The parents also were 16 percent more likely to only vaccinate their kids because the school required it.

Hesitancy to get children vaccinated might stem from a parent’s uncertainty over how to handle the event — something Mary Ives, a registered nurse in British Columbia, Canada, saw often. And when a kid is afraid of needles or the potential pain, healthcare practitioners feel stressed too. “If it’s not handled well, it leaves everybody feeling worse than before,” she says.

While surveying nurses about their experience vaccinating children, Ives heard that people dreaded vaccinating children who were afraid. Nurses felt emotionally exhausted over the confrontations and reported lacking support from employers and parents, as both might pressure nurses to inject and get the event over with. Overriding a kid’s clear communication of fear and rejection because that’s what parents or providers wanted them to do left nurses uneasy. Respondents said they felt like they were in a situation “where you feel like you have to choose between the lesser of two evils,” Ives says.

What the nurses wanted was to pause, reassess and possibly rebook the appointment for another day. Having those earliest vaccines go smoothly is crucial. How someone encounters needles as a kid sets up their future feelings and reactions to injections, and can be an opportunity for children to learn that fear is manageable, Ives says.

And oftentimes, a chance to try again with a new approach might be all a kid needs to handle the vaccine better, something that holds true for most people. “Those of us who take care of kids have been trying methods to help them be more comfortable with being vaccinated for our whole careers,” writes Margot Savoy, an attending physician at Temple University Hospital, via email. Letting kids hold someone’s hand or focus on something else can ease their fears, as can giving them some sense of control, like letting them choose what short sleeve shirt to wear or whether or not to see the needle first.

Adults nervous around needles benefit from similar approaches. Vaccine providers should remind patients to come in a short-sleeve shirt if possible to eliminate any stress about half-way undressing. Phones or companions provide distraction, and in mass vaccination sites, privacy screens can ease fear, too. Being truthful — that a shot in the arm isn’t painless — acknowledges what someone might be going through. “Being honest goes a long way,” Savoy says. She tells patients she gets her flu shot every year, that it pinches going in, and that her arm will ache a little. “But that is better than getting the flu! I've had influenza before. I don't ever want to feel so sick that my hair hurts ever again as long as I live.”

For people with needle phobia, in-office help might not be enough. Instead, these individuals benefit from exposure therapy, where therapists guide them through increasingly difficult encounters — a picture of a needle, for example, then eventually a video of someone getting a shot — to help show that their fear is greater than any actual risk. McMurtry and her colleagues are working on a self-guided version of this protocol for those without access to therapists.

It’s possible some of these fears might become obsolete one day: Researchers are investigating nasal spray and patch-based vaccines in part because they avoid injection anxiety. But for now, shots are how most people get vaccines. It’s also a barrier that can come down for most people with calm conversations and an opportunity to feel some control. And if that’s all that stands between someone and their COVID-19 vaccination, then maybe it’s time for more people to take needle fear seriously. “We are interested in getting as many people vaccinated as possible,” Taddio says, “and that's one way we can offer to help.”