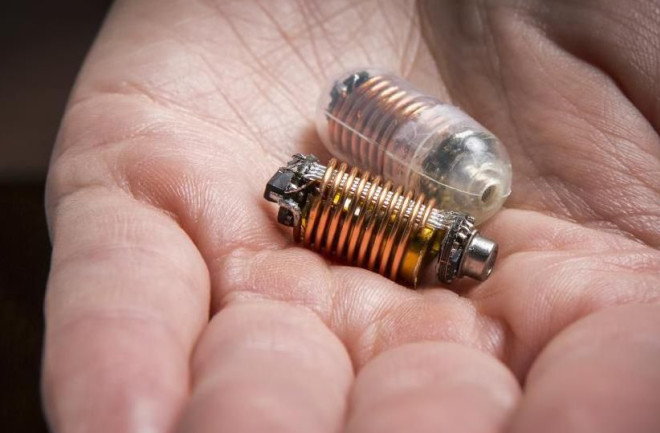 A close up of the swallowable sensor. (Photo: Peter Clarke/RMIT University) Your nose, mouth, skin pores and…other…body holes each serve their unique functions. But most of them also double as biological exhaust pipes, spewing gaseous byproducts of the myriad internal chemical reactions keeping you alive. And, just as we measure emissions form our internal-combustion vehicles, advances in medical technology make it easier to analyze the gases you leak into the atmosphere. Scientists at RMIT University in Australia developed a pill-sized sensor that measures hydrogen, carbon dioxide and oxygen gases circulating in the gut—and in real-time. Temperature and gas sensors, batteries, antennas and a wireless transmitter are all sealed within a gas-impermeable shell. One end of the device—you might call it the nose—features a small, gas-permeable membrane, which allows the sensor to get a whiff of its surroundings. Every 5 minutes, the device beams back data about gas concentrations to another device.

"Just as body temperature is an indicator of general health, the concentration of gases produced by the microbiome is an indicator of gut health," wrote Benjamin Terry, a University of Nebraska engineering professor in a Naturecommentary about the study. "More valuable still is an understanding of the gas concentration profile along the entire length of the gut." When researchers tested their device in humans, they divided a group of seven people into high-fiber and low-fiber diet groups. Their gas sensor could detect the moment food started fermenting in the gut. They also used ultrasound to track the device location as it meandered through the digestive tract, to pair gas readings with a particular gut locale. Researchers published their work this week in the journal Nature Electronics. The device grants doctors and researchers an easier way to measure the activities of the gut microbiome, or the vast community of organisms that thrive inside you. Current anthro-biogas measurement techniques are a bit unwieldy, according to Terry. Getting a sample of gut gas can require analyzing flatus (farts), insertion of tubes, breath tests and whole-body calorimetry. “The gut microbiome is the community of microorganisms that live in the human gastrointestinal system and may play a role in the development of a startling number of diseases, including inflammatory bowel disease, obesity, cardiovascular disease, circulatory disease and even autism,” Terry wrote. Already, study lead author Kourosh Kalantar-Zadeh says their device showed the stomach releases a slew of oxidizing chemicals that destroy foreign compounds lingering in the stomach for too long. Kalantar-Zadeh says it might be the first observation of a “gastric protection system against foreign bodies.” No doubt, there’s a market for such technology in the doctor’s office and research labs. But you know some intrepid programmer could (should?) design an app that monitors concentrations of noxious fumes and sends your smartphone a real-time fart forecast when levels spike. That way you could, perhaps, provide fair warning to yourself, your friends and your family of a pending leak.