Mites shelter in our hair and pores. Researchers worry that this lifestyle could lead to an evolutionary dead end. 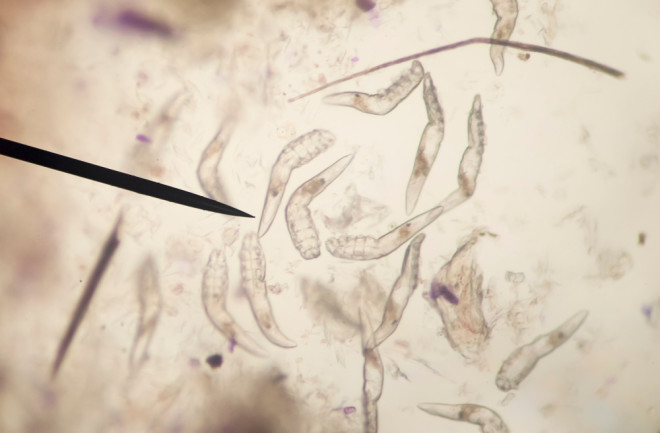 Your face is teeming with mites. These microscopic critters, called Demodex, live on our hair and eat the oils in our pores. Unlike most mites, the ones on your face have stumpy legs and long tails, like Appa or Catbus, if they were 0.3 mm long.

New research published in the journal Molecular Biology and Evolution found that Demodex developed its unique body plan through inbreeding, a sheltered life and genome shrinkage. The authors warn that continued DNA erosion could drive the species to extinction.

During breastfeeding, mites leap from a mother’s nipple to the baby’s face. This is the primary way that they spread between humans; even spouses living in the same house harbor unique Demodex populations.

Aside from mother-child transmission, mites and their descendants all stay on one human. Experts estimate that the mites inbreed for over 1,200 generations from the time they first infect a host to the time the host dies. That’s comparable to your ancestors inbreeding for 30,000 years.

Human pores shield Demodex from the outside world and natural selection. Many of the genes that randomly mutate would be lethal for a free-living mite, but for Demodex, they simply aren’t necessary anymore. The mutations then pass down the line from sire to offspring.

By sequencing the genomes of over 250 individuals, researchers found that relaxed selection pressure on Demodex eroded and reshuffled their genomes.

The animals had the fewest number of protein-coding DNA regions of any arthropod — the group of animals that includes insects, crustaceans and arachnids. They lost genes that coded for stress response, immune response and reproduction.

The mutations also distorted the mites’ anatomy. They reshuffled their Hox genes — an ancient set of genes that determines where body parts grow — leading to enlarged feeding appendages and a penis that grows on the animal’s back.

“We found these mites have a different arrangement of body part genes [...] due to them adapting to a sheltered life inside pores,” says co-author Alejandra Perotti, an associate professor at the University of Reading, in a press release.

While some mutations are harmless, others could be fatal. For example, Demodex lost a suite of genes that repairs potentially deadly DNA mutations when they occur.

The mites’ secluded lifestyle leaves the species’ future to chance. Because Demodex only spreads between humans during breastfeeding, they get bottlenecked during transmission. Only a few can make it out. If these just happen to be the ones carrying lethal mutations, then that could spell the end of an ancestral line. With enough bottlenecks, the species could go extinct.