After linking to Marnie Dunsmore's blog on the Neolithic expansion, and reading Peter Bellwood's First Farmers, I've been thinking a bit on how we might integrate some models of the rise and spread of agriculture with the new genomic findings. Bellwood's thesis basically seems to be that the contemporary world pattern of expansive macro-language families (e.g., Indo-European, Sino-Tibetan, Afro-Asiatic, etc.) are shadows of the rapid demographic expansions in prehistory of farmers. In particular, hoe-farmers rapidly pushing into virgin lands. First Farmers was published in 2005, and so it had access mostly to mtDNA and Y chromosomal studies. Today we have a richer data set, from hundreds of thousands of markers per person, to mtDNA and Y chromosomal results from ancient DNA. I would argue that the new findings tend to reinforce the plausibility of Bellwood's thesis somewhat. The primary datum I want to enter into the record in this post, which was news to me, is this: the island of Cyprus seems to have been first settled (at least in anything but trivial numbers) by Neolithic populations from mainland Southwest Asia.* In fact, the first farmers in Cyprus perfectly replicated the physical culture of the nearby mainland in toto. This implies that the genetic heritage of modern Cypriots is probably attributable in the whole to expansions of farmers from Southwest Asia. With this in mind let's look at Dienekes' Dodecad results at K = 10 for Eurasian populations (I've reedited a bit): 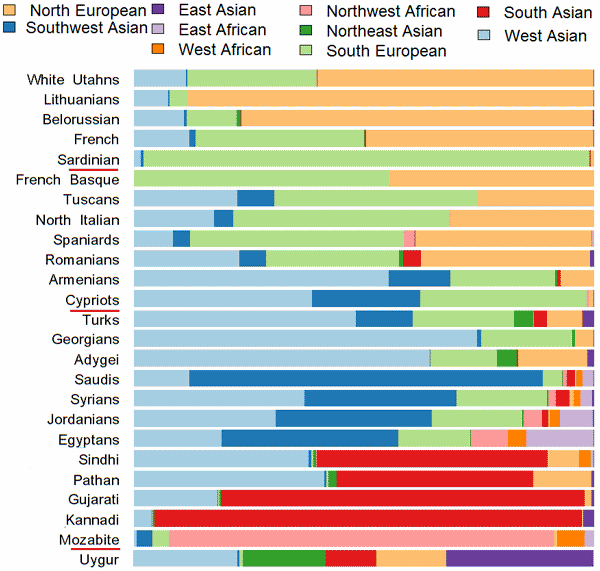 Modern Cypriots exhibit genetic signatures which shake out into three putative ancestral groups. West Asian, which is modal in the Caucasus region. South European, modal in Sardinia. And Southwest Asian, which is modal in the Arabian peninsula. Cypriots basically look like Syrians, but with less Southwest Asian, more balance between West Asian and South European, and far less of the minor components of ancestry. Just because an island was settled by one group of farmers, it does not mean that subsequent invasions or migrations could not have an impact. The indigenous tribes of Taiwan seem to be the original agriculturalists of that island, and after their settlement there were thousands of years of gradual and continuous cultural change in situ. But within the last 300 years settlers from Fujian on the Chinese mainland have demographically overwhelmed the native Taiwanese peoples. During the Bronze Age it seems Cyprus was part of the Near East political and cultural system. The notional kings of Cyprus had close diplomatic relations with the pharaohs of Egypt. But between the end of the Bronze Age and the Classical Age Cyprus became part of the Greek cultural zone. Despite centuries of Latin and Ottoman rule, it has remained so, albeit with a prominent Turkish minority. One thing notable about Cyprus, and which distinguishes it from mainland Greece, is the near total absence of a Northern European ancestral component. Therefore we can make the banal inference that Northern Europeans were not initially associated with the demographic expansions of farmers from the Middle East. Rather, I want to focus on the West Asian and Southern European ancestral components. One model for the re-population of Europe after the last Ice Age is that hunter-gatherers expanded from the peninsular "refugia" of Iberia and Italy, later being overlain by expansions of farmers from the Middle East, and perhaps Indo-Europeans from the Pontic steppe.

. I now would offer the tentative hypothesis that the South European ancestral element at K = 10 is a signature of the first wave of farmers which issued out of the Near East. The West Asians were a subsequent wave. I assume that the two groups must correlate to some sort of cultural or technological shift, though I have no hypothesis as to that. From the above assertions, it is clear that I believe modern Sardinians are descendants of that first wave of farmers, unaffected by later demographic perturbations. I believe that Basques then are a people who emerge from an amalgamation of the same wave of seafaring agriculturalists with the indigenous populations preceding them (the indigenes were likely the descendants of a broad group of northern Eurasians who expanded after the end of the last Ice Age from the aforementioned refugia). They leap-frogged across fertile regions of the Mediterranean and pushed up valleys of southern France, and out of the Straits of Gibraltar. Interestingly, the Basque lack the West Asian minority element evident in Dienekes' Spaniards, Portuguese, as well as the HGDP French (even up to K = 15 they don't shake out as anything but a two way admixture, while the Sardinians show a minor West Asian component). Also, the West Asian and Southern European elements are several times more well represented proportionally among Scandinavians than Finns. The Southern European element is not found among the Uyghur, though the Northern European and West Asian one is. I infer from all these patterns that the Southern European element derived from pre-Indo-European farmers who pushed west from the Near East. It is the second largest component across much of the Northwestern Europe, the largest across much of Southern European, including Greece. A second issue which First Farmers clarified are differences between the spread of agriculture from the Near East to Europe and South Asia. It seems that the spread of agriculture across South Asia was more gradual, or least had a longer pause, than in Europe. A clear West Asian transplanted culture arrived in what is today Pakistan ~9,000 years ago. But it does not seem that the Neolithic arrived to the far south of India until ~4,000 years ago. I think that a period of "incubation" in the northwest part of the subcontinent explains the putative hybridization between "Ancient North Indians" and "Ancient South Indians" described in Reconstructing Indian population history. The high proportion of "Ancestral North Indian," on the order of ~40%, as well as Y chromosomal markers such as R1a1a, among South Indian tribal populations, is a function of the fact that these groups are themselves secondary amalgamations between shifting cultivators expanding from the Northwest along with local resident hunter-gatherer groups which were related to the ASI which the original West Asian agriculturalists encountered and assimilated in ancient Pakistan (Pathans are ~25% ASI). I believe that the Dravidian languages arrived from the Northwest to the south of India only within the last 4-5,000 with the farmers (some of whom may have reverted to facultative hunter-gathering, as is common among tribals). This relatively late arrival of Dravidian speaking groups explains why Sri Lanka has an Indo-European presence to my mind; the island was probably only lightly settled by farming Dravidian speakers, if at all, allowing Indo-European speakers from Gujarat and Sindh to leap-frog and quickly replace the native Veddas, who were hunter-gatherers. Note:Here is K = 15. * Wikipedia says there were hunter-gatherers, but even here the numbers were likely very small.