Evolutionary trade-off between weapons and testes. 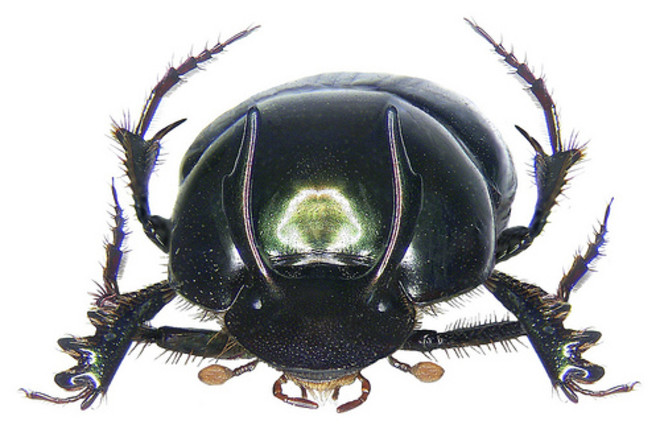 Photo: flickr/Udo Schmidt Fast cars. Big boats. Massive weapons. Genital size. Totally uncorrelated? Not if you believe pop psychology, or if you are a scarab beetle. Although beetles don't drive or shoot guns, they often have huge horns that serve as weapons. But one could imagine that the energy used to grow these horns results in smaller genitals, and that's the hypothesis these scientists decided to test. Turns out, if you prevent a beetle from growing horns, it grows larger testes. This sounds like the basis for a new internet scam. Any takers?Evolutionary trade-off between weapons and testes. "It has long been recognized that male mating competition is responsible for the evolution of weaponry for mate acquisition. However, when females mate with more than one male, competition between males can continue after mating in the form of sperm competition. Theory predicts that males should increase their investment in sperm production as sperm competition is increased, but it assumes that males face a trade-off between sperm production and other life-history traits such as mate acquisition. Here, we use a genus of horned beetle, Onthophagus, to examine the trade-off between investment in testes required for fertilizations and investment in weapons used to obtain matings. In a within-species study, we prevented males from developing horns and found that these males grew larger and invested relatively more in testes growth than did males allowed to grow horns. Among species, there was no general relationship between the relative sizes of horns and testes. However, the allometric slope of horn size on body size was negatively associated with the allometric slope of testes size on body size. We suggest that this reflects meaningful evolutionary changes in the developmental mechanisms regulating trait growth, specifically in the degree of nutrition-dependent phenotypic plasticity versus canalization of traits. Finally, we show how this resource allocation trade-off has influenced the evolutionary diversification of weapons, revealing a rich interplay between developmental trade-offs and both pre- and postmating mechanisms of sexual competition."

Figure 1: Evidence for an allocation trade-off between weapons (horns) and testes in the beetle genus Onthophagus (Coleoptera: Scarabaeidae). (A) Within the species O. nigriventris, large males produce two horns on the thorax. (B) Males engineered to be hornless (□) eclosed into larger adults with testes that were disproportionately large compared with control males that developed horns (●). The common regression line is shown with its 95% confidence limits. (B Inset) The residual testes weights for cauterized and control beetles after controlling for body weight. (C and D) In a comparative analyses of 25 congeneric species, the steepness of the allometric slope of log testes weight on log body weight declined across species as both body size (C) and the steepness of the scaling relationship between horn length and body size (D) increased. Photograph by O. Helmy.