The Pith: This post explores evolution at two different scales: the broad philosophical and the close in genetic. Philosophically, is evolution a highly contingent process which is not characterized by much replication of form and function? Or, is evolution at the end of the day aiming for a few set points which define the most optimal fitness positions possible? And how do both of these models relate to the interaction across genes, epistasis? In this post I review a paper which shows exactly how historical contingency could work through gene-gene interactions on the molecular genetic scale.

Imagine if you will a portal to another universe which you have access to. By fiat let's give you a "pod" which allows you to move freely throughout this universe, and also let's assume that you can travel fast enough to go from planet to planet. What if you see that on all the planets there's a sludgy living "goo" of some sort? To complexify the issue imagine that upon further inspection the goo is divided between a predominant photosynthetic element, and "parasitic" heterotrophs. But aside from these two niches there's little diversity to be seen in this cosmos. The "climax ecology" of all the planets resemble each other, in case after case convergent evolution toward the one-morphology-to-out-fit-them-all. We could from these observations construct a general theory of evolution which deemphasizes the role of contingency. In other words, there are broad general dynamics which shape and prune the tree of life in this hypothetical universe so that there is always a final terminal steady-state of the most fit morphology. 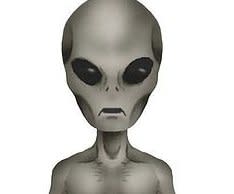 A model of evolution as a process of very general principles which converges upon a small finite range of optimal solutions has been promoted by paleontologists such as Simon Conway Morris. Stephen Jay Gould was a famous expositor of the inverse position, which emphasized chance and contingency. Gould's suggestion was that if you ran the evolutionary experiment anew the outcomes each time would likely differ. In The Ancestor's Tale Richard Dawkins leans toward the former position, insofar as he does assent to the proposition that evolutionary dynamics do inevitably forward certain broad trends, irrespective of the specific historical sequence of states antecedent to the terminus. More fanciful and speculative extrapolations of this logic are used to justify the ubiquity of a humanoid morphology in science fiction. The theory goes that a bipedal organism whose upper limbs are free to manipulate tools is going to be the likely body plan of intelligent aliens (though they will also have easy to add nose frills and such). Until we meet those aliens these speculations are going to remain just that. And the debates about morphology, in particular body plan, are constrained by the fact that we have only one "natural experiment" to go on. So that's why it is interesting to look at genetics, which is after all the modern fundamental characterization of the basic of evolutionary process in regards inheritance of traits. In particular looking at molecular genetics and evolution can be illustrative of the grounding of broader process. Neutral theory, which was stimulated by an understanding of evolution on the molecular level, has reordered our perception of the nature of larger scale morphological characters, in terms of both their potential utility and ultimate origin. Similarly, an inspection of the interactions of genotypes can put a spotlight on the adaptive landscape, an abstraction of the dimension of fitness explored by combinations of genetic variants. 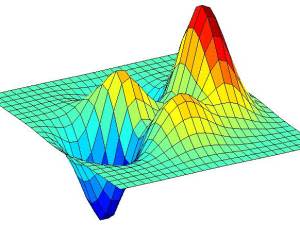 A new paper in PLoS Genetics explores the specific question of the role of epistasis in the dance between contingency and determinism. The more common conceptualization of epistasis is mechanistic or biophysical, describing concrete gene-gene interactions on a molecular genetic scale. In this context we are more curious about the fitness and phenotypic implications of gene-gene interactions. This is evolutionary or statistical epistasis. You can think of this sort of phenomenon as simply the non-linearities in the mapping from genotype to phenotype. Evolutionary genetics in the early 20th century was formulated by R. A. Fisher to avoid these non-linearities. Rather, it fixated on a model of change of allele frequency one locus at a time, averaging the "genetic background." These were evolutionary genetic architectures which were additive and independent (multiplicative effects remain linear, and can be rescaled easily). Statistical epistasis is describing genetic architectures which are not additive and independent. Fisher's intellectual rival Sewall Wright was more concerned with these interaction effects in his "Shifting Balance Theory," but even Will Provine, Wright's biographer, admitted that there was a certain incoherency and lack of clarity in his thoughts on gene-gene interactions and adaptive landscapes. So where are we now? In the PloS Genetics paper, Initial Mutations Direct Alternative Pathways of Protein Evolution, the authors suggest that interlocking gene-gene interactions can shape the path of evolution via the constraints which prior states place upon later ones. In other words the adaptive landscape is not simple in its topography, characterized by a clear and distinct fitness peak, but is rugged so that there are multiple points upon which the populations may converge upon. Here's the author summary:

A long-term goal of evolutionary biology is to understand the factors that govern the outcome of evolution. Epistasis (i.e. the situation in which the fitness effect of a mutation depends on its genetic background) is one such factor. Epistasis not only affects the dynamics of evolution, it may also direct its outcome by affecting the type and order of selected mutations. This effect is particularly strong under sign epistasis, which occurs when the sign of a mutation's fitness effect depends on its genetic background. Here, we demonstrate how epistasis causes divergence of mutational pathways of an antibiotic resistance enzyme, TEM-1 β-lactamase. First, we use in vitro mutagenesis followed by selection for cefotaxime resistance to demonstrate that alternative mutational pathways towards highly resistant variants exist in addition to the main pathway that was previously described. Next, to test whether negative interactions between alternative initial substitutions govern this diversification, we start identical evolution experiments with alleles containing initial substitutions from the deviating lines. These alleles consistently evolve to lower adaptive peaks and acquire different mutations than those in the main pathway. Our results demonstrate that sign epistasis between alternative initial substitutions may force evolution to follow different mutational pathways. 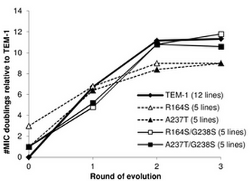 This is not a paper gifted with easy to comprehend figures. The one to the left though is rather informative. It shows what we should expect in regards to evolutionary arcs: populations converge upon a fitness peak and enter a phase of stasis after rapid evolution. Each of the lines denotes different mutational lineages, and the height on the y-axis illustrates how resistant these lineages are to antibiotics. The x-axis is time. In this series of directed evolution experiments they seem to have increased the mutation rate so that genetic variation was not a limiter on the action of evolution through natural selection (remember, the power of selection is proportional to genic variance). This is to some extent old school genetics. We're not talking thousands of SNPs. But I honestly had a hard time keeping in mind the alphabet soup of different loci. But the broad insights are derived from a narrow range of results: - An initial set of experiments which allowed for the evolution of antibiotic resistance show the emergence of a similar genetic profile in most of the lines. This illustrates the power of convergence given the same exogenous adaptive pressure, the antibiotic. The authors argue that this highlights epistasis' role in constraining the mutational space across the genome which can be modified to allow for antibiotic resistance. - But, there were exceptions in several lineages. Two lack the G238S substitution. These two lines had reduced ability to resist the antibiotic. Forcing the G238S variant onto the background of the lineages which lacked it resulted in the finding that this substitution did not have a fitness improving impact, in contrast to the other cases. This shows the importance of genetic background, as the nature of other genes affects the selective advantage or lack thereof of a particular allele. Additionally, the lineages which lacked G238S tended to plateau at a lower of level of resistance. These would be lower fitness peaks, but separated from the higher G238S peak by "valleys." - Also, in these lineages there seem to be an excess of mutations as opposed to the G238S bearing trials. The authors offer the hypothesis that this selection of mutants in this novel background is evidence that the evolutionary process is taking a different route to solving the same problem because of shifted initial conditions (i.e., genetic variants which block the selection of G238S). - Aside from the key initial mutations the authors also noted that there was a tendency to specific joint mutational pairs, as well as negative correlations across others. In other words, if mutation X was present, mutation Y tended not to be present, and vice versa. This suggests that the mutational path toward a fitness peak is not a series of independent steps, but a varied set of circumlocutions until an avenue toward the goal is sighted. - Finally, forcing different pairs of negatively epistatic variants also resulted in different outcomes contingent upon the magnitude of the interaction. In a case where there was very strong negative epistasis (sharply reduced fitness, and reduced expression of the phenotype) there was a rapid reversion back to a state where such epistasis was mitigated. Remember, the mutational rates here were high, so back mutations are possible. But a second case with far weaker epistasis showed that such reversions were not always inevitable. In these cases weak epistatic interactions may eventually have been masked by modifier variants in the genetic background. So is evolution contingent, or is it inevitable? Do gene-gene interactions play a major long-term role in evolution, or is epistatic variance inevitably converted to additive genetic variance?

I think the answer is that it depends.

Instead of dichotomously binning the possible space of answers one just has to acknowledge that the nature of the parameters are important. In a universe of near infinite population size and stable environmental conditions one suspects that contingency is rather less important, as natural selection can explore an enormous range of genotypic combinations over long periods of time. A contrasting situation would be one where environmental pressures are protean, and populations constrained in size. If evolution by natural selection is thought of as a tinkerer, you'd naturally see a lot more ad hoc contingent creations when you limit the raw materials (population size) and reduce the time to create (by changing selection pressures). Citation: