Even Our Ancestors Never Really Ate the "Paleo Diet" 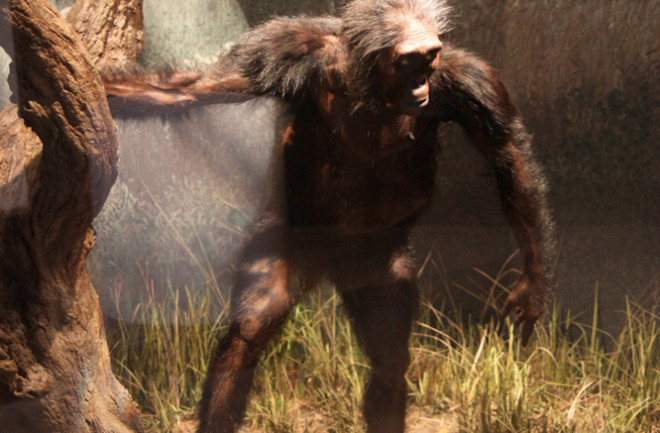 Despite its name, the Paleo Diet is a new food trend, one which has become increasingly popular in recent years. The diet’s basic tenet is that our bodies haven’t yet evolved to cope with the changes to our food intake as a result of agriculture. Paleo Diet aficionados hold that grains like wheat are making us fat and unhealthy, and that we would be far better off if we ate how our ancient ancestors did, focusing on lean meats, fruits and vegetables.

What researchers haven’t been able to answer, however, is exactly what our ancestors ate. Early humans and our other hominin predecessors lived pretty much everywhere, in environments as diverse as the Arctic, tropical rainforests and deserts, and so its likely that diet varied by region. Even within a given region, reconstructions of diet have had to rely on tooth analysis or bones found nearby.

A quartet of papers published today in Proceedings of the National Academy of Sciences have instead turned to stable isotope analysis, which analyzes the specific chemical signature of molecules, to determine the diets of a variety of ancient hominin species by looking at their fossilized teeth. The findings show that human ancestors started moving away from the traditional ape diet of fruit and leaves about 2.5 million years ago—much earlier than previously thought. Thus, even our “paleo” ancestors may never have eaten a paleo diet.

“Most modern primates have diets of leaves from trees and shrubs. What sets humans apart is their transition to the new restaurant in town,” which serves grains, grasses and sedges, said Thure Cerling, a geologist at the University of Utah and co-author of three of the four new PNAS papers. “Humans are one of the few primates to figure out how to access this resource, which they appeared to do sometime between 4 and 3.5 million years ago.”

Researchers frequently analyze carbon’s chemical signature when they study organisms, living and dead, since carbon is a key component of the molecules of life. Unlike radioactive isotopes, stable isotopes don’t radioactively decay, which means their ratios remain constant over time.

Carbon has two stable isotopes: carbon-12 and carbon-13. Most of the carbon found on Earth is carbon-12, which means it has six protons and six electrons. Stable isotope expert Hope Jahren, a geologist at the University of Hawaii who was not involved in the studies, calls this vanilla carbon. Carbon-13, which makes up just 1.1% of Earth’s carbon, has six protons and seven neutrons. Jahren calls this cinnamon carbon.

Stable isotope analysis essentially measures the ratio of vanilla and cinnamon carbon, Jahren says. It’s useful because different organisms have different ratios depending on what they eat. Plants have different ratios of vanilla and cinnamon carbon based on the type of photosynthesis they use. Plants using C3 photosynthesis (trees, shrubs and herbs) aren’t picky about whether they use vanilla or cinnamon carbon, so the ratios in these plants are the same as the ratio of carbons in the natural environment. Plants that rely on C4/CAM photosynthesis (including tropical grasses and sedges) are much more selective toward cinnamon carbon. Since animals build molecules in their bodies from the foods they eat, analyzing the stable isotopes of fossilized remains can tell scientists a lot about an ancient organism’s diet.

“Your bones are not just made of the last meal you had, but the meals that you’ve had across many years. By looking at the composition of those teeth, researchers can say that something was a large component of the diet. This tells us a lot about how hominins lived and what they ate,” Jahren said.

Essentially all of the great apes and their ancestors appeared to have eaten a C3-based diet, consuming fruits, leaves and other plants. Modern humans, on the other hand, rely much more on C4 plants, which include grains like wheat sorghum and corn. What researchers didn’t know was when that shift occurred. The PNAS papers show that this shift appears to have occurred in Australopithecus afarensis, which lived in and around Ethiopia 2.9 to 3.9 million years ago.

An analysis of the vanilla and cinnamon carbon in A. afarensis from the middle Pliocene (3.0 to 3.7 million years ago) shows that this hominin had already shifted to a C4-based diet. Jonathan Wynn, a geologist at the University of South Florida, and colleagues analyzed 20 fossilized teeth of A. afarensis from the Hadar region of Ethiopia. Although there was significant variability in the proportion of C4 plants consumed, on average, A. afarensisconsumed significantly more C4 plants than its recent ancestor Australopithecus anamensis. These hominins were thus already eating grain in an adaptation for life on the savannah, Cerling said.

Cerling’s own analysis of hominin fossils found in the Turkana basin in Kenya, and published in a second paper, shows that some hominins there were also making the shift to a C4-based diet. Several species of Homo (the authors did not distinguish between several of these closely related species) as well as Paranthropus boisei, which lived between 2.3 to 1.2 million years ago, showed evidence of a grain- and grass-based diet. This shift coincided with the retreat of heavily forested areas that were replaced by open savannah.

A third study, also led by Cerling, used stable isotopes to analyze the diet of several species of Theropithecus, the ancestors of the modern gelada baboon, a grass-eating ape that lives in the highlands of Ethiopia. Like its descendant, Cerling and colleagues found that the ancient Theropithecus species almost exclusively ate C4 plants, similar to the diets of the modern geladas. But although ancient Theropithecus and ancient hominins lived in the same area and both had a primarily C4 diet, they did not appear to be in direct competition with each other, Cerling noted, likely because they preferred different types of C4 plants.

Finally, a review paper by Wynn, Cerling and colleagues analyzed what we know about ancient hominin diets. Big brains and upright walking are two of the main factors that distinguish humans from other primates, and it appears that a shift in diet from leaves to grasses may be a significant third factor.

“Hominins began leaving the forests along the riverbanks and venturing more and more into open habitats that primates haven’t previously explored,” Cerling said. “Most primates today are still stuck in the forests.” Human success, he noted, is partly linked to our ability to exploit a more diverse array of food.

“These studies are important mainly for their novelty,” Jahren said. “It’s a major advance in understanding not just what a hominin looked like or where they lived but what it was like to be one—how they lived, what they sat down to eat every night if they were lucky. That’s a major advance.”

So while there remains little doubt that many modern humans eat too much sugar and processed foods, these studies show that identifying a particular “paleo” diet is impossible. Researchers are just beginning to understand what ancient humans ate, and these recent studies show that grasses and grains have been part of the human diet for millions of years.

Carrie Arnold is a freelance science writer in Virginia. She blogs about the science of eating disorders at www.edbites.com, and frequently covers microbiology topics for national magazines.