Even Discreet, Conscientious Smokers Leave a Trail of "Third-Hand Smoke" 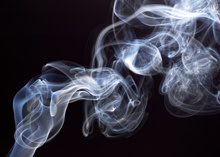 It doesn't matter if they only smoke when the kids are out of the house, or when they're alone in the car, or even if they only smoke outside; researchers still warn that toxic chemicals exhaled by cigarette smokers cling to their clothes and hair, and linger in upholstery, curtains, and carpets. In a new study, researchers say the public is well aware of the health effects of second-hand smoke, when nonsmokers are directly exposed to the cigarette smoke of others, but hasn't yet caught on to the danger of what they call "third-hand smoke." Lead author Jonathan Winickoff explains that third-hand smoke

is what one smells when a smoker gets in an elevator after going outside for a cigarette, he said, or in a hotel room where people were smoking. “Your nose isn’t lying,” he said. “The stuff is so toxic that your brain is telling you: ’Get away’” [The New York Times].

The researchers say that there is no safe level of exposure to tobacco smoke, and note that children are particularly susceptible to ill-effects from the toxic residue left behind long after a cigarette has been stubbed out.

Among the substances in third-hand smoke are hydrogen cyanide, used in chemical weapons; butane, which is used in lighter fluid; toluene, found in paint thinners; arsenic; lead; carbon monoxide; and even polonium-210, the highly radioactive carcinogen that was used to murder former Russian spy Alexander V. Litvinenko in 2006. Eleven of the compounds are highly carcinogenic [The New York Times].

Since babies crawl over and play on rugs, and since they're more likely to put stray objects in their mouths, they have more direct exposure to the chemicals left behind by cigarette smoke that may have infused household materials. The researchers also

warn that babies and other young children are more susceptible to 'third-hand smoke' than adults because their lungs are still developing. "When you smoke – any place – toxic particulate matter from tobacco smoke gets into your hair and clothing," said Dr Jonathan Winickoff.... "When you come into contact with your baby, even if you're not smoking at the time, she comes in contact with those toxins. And if you breastfeed, the toxins will transfer to your baby in your breastmilk" [Telegraph].

The researchers conducted a survey, which was published in the journal Pediatrics, to determine whether people are aware of the dangers posed by third-hand smoke; they found that 65 percent of nonsmokers and 43 percent of smokers agreed that third-hand smoke harms children. Raising awareness of the risks of third-hand smoke could encourage more families to institute smoking bans in their houses, says respiratory health expert Joel Africk.

"We see this as the right and authority of the family to decide that they are not going to allow those carcinogens in the house," said Africk, who was not involved in the study. Africk emphasized that the Pediatrics study did not call for legislation that would ban smoking in private homes [Chicago Tribune].

HealthHow Much Alcohol Is Too Much?