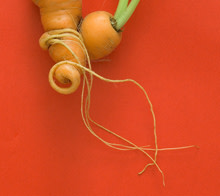 No one will stop you from puttering around the supermarket in sweat pants and mangy hair, but the produce selection faces far more stringent standards.Throughout Europe, crooked cucumbers, forked carrots, and bananas with one too many blemishes have been banned from the markets for the past two decades.But a new decision by the European Union will lift appearance-based restrictions for 26 types of fruits and vegetables, including asparagus, cherries, and onions, allowing all shapes and sizes to vie for a place in your shopping cart.Ten other types of produce, including apples, peaches, and tomatoes, will enjoy relaxed standards, but misshapen individuals will still need to be labeled as such.

Proponents of irregular produce cited the recent economic downturn and the wastefulness of throwing away produce just because they are the “wrong” shape.However, political support for the new standards was far from unanimous, with 16 out of the EU’s 27 nations voting against the changes.The new rules will take effect next July.Produce not included in the list, like bananas, will still have to pass strict beauty standards.

Authorities were eager to offer their praise of the deregulation:

“This marks a new dawn for the curvy cucumber and the knobbly carrot,” declared Mariann Fisher Boel, European commissioner for agriculture.

“Food is food, no matter what it looks like,” said Richard Ashworth, Tory MEP for the South East.

“We have been struggling to fit a square peg in a round hole for too long now,” said Sue Henderson, senior executive of Sainsbury, the supermarket chain.

“We’re looking forward to selling oddly-shaped veg – after all ugly is only skin-deep,” said Lucy Maclennan, a buyer for Sainsbury.