Elite Athletes Get a Performance Boost From Special Gut Microbes

Researchers at Harvard Medical have found that elite athletes like marathon runners have more of a gut microbe, Veillonella, that gives them an endurance boost. They’re working on turning it into a probiotic so us slowpokes can get a boost, too. 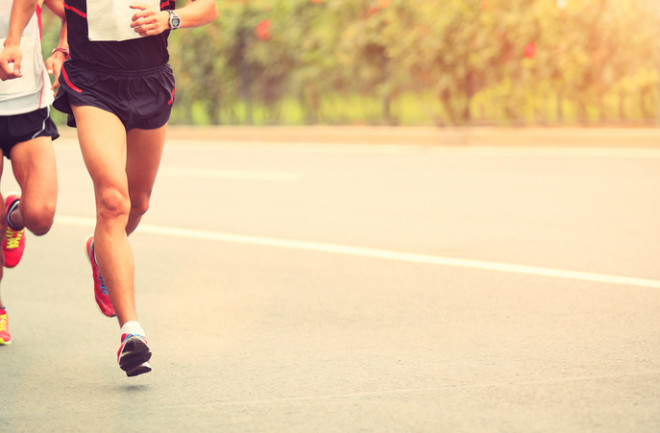 More and more, researchers have been studying how your gut microbes might be making you sick. Scientists have linked these vital bugs to everything from schizophrenia, to autism, allergies and obesity. But what do the microbes look like inside the guts of super healthy people? Say, in elite athletes like marathon runners?

A research team from the Joslin Diabetes Center and Wyss Institute, both at Harvard Medical School, sampled the gut bacteria from runners a week before, and a week after, they ran the Boston Marathon. The group, led in part by microbiologist Alex Kostic, compared the samples to those from some non-elite athletes: scientists in the lab. The findings were published Monday in Nature Medicine.

The team found that most of the marathoners had a higher abundance of a bacteria called Veillonella. This group of species, or genus, lives off of lactate. Remember the last time you “felt the burn” from exercising or some other strenuous task? That’s the lactate in your muscles.

After the marathon, these lactate-eating bacteria in the runners’ guts went nuts, or “bloomed,” in bacteria lingo. Now, the researchers have pieced together how these bacteria might give elite athletes a boost — and how they might be able to share that boost with the rest of us.

The researchers gave some lab mice Veillonella from the runners — rodent probiotics, if you will — and tested their running endurance. Mice with the marathoner’s microbes ran for 13 percent longer than those without before hitting exhaustion.

Then, they looked at the microbiomes of a bigger cohort of endurance athletes — adding ultra-marathoners and Olympic trial rowers to their study — and saw that Veillonella bloomed after exercise in them, too. More, they found the genes that were switched on in the microbes, and figured out how they were breaking down lactate into another compound, propionate.

This all makes sense until you think about why the lactate built up in muscles would end up in the athletes’ colons at all. Researchers already knew most of the break-down of lactate happens in the liver. So the researchers decided they should trace some lactate through the body to see if any ended up in the gut. They laced some lactate with a heavier version of the element carbon, called an isotope. Then they injected this into the rodent test subjects, waited a few minutes, killed them and opened up their guts to look for the substance. The team found that some of this lactate did indeed end up in the mice’s colons.

At this point, it seemed to the scientists like it was all adding up. If Veillonella eat lactate, maybe these athletes don’t feel so much of the burn, allowing them to do well at these high-endurance events. But, the researchers learned, the story is more complicated than that. When they looked at post-exercise mice with and without Veillonella in their systems, the animals’ lactate levels weren’t that different.

Instead, they looked closer at the propionate the gut bacteria were producing from the lactate. They gave mice (with no Veillonella) propionate enemas to see what effect the compound would have in the gut.

The propionate increased their treadmill endurance, just like the Veillonella had. The added endurance wasn’t because the elite athletes had less lactate, it was because they had more propionate.

What, exactly, the propionate is doing isn’t totally settled yet, but this compound is known to do a couple of things in the body. It’s anti-inflammatory, and it can serve as an energy source to cells in the gut. It might also increase some nervous system capacities.

But before you run out to get a propionate enema (please don’t — Kostic says that would be “highly unadvisable”), there may be a better solution.

Jonathan Scheiman, another lead author of the work, started on this research when he was a researcher at the Wyss Institute. But he’s since left to start a biotech startup called FitBiomics.

“There’s a real big desire and push [at Wyss] to not keep discoveries bottled up in the lab and find ways to translate them into the real world,” Scheiman says.

FitBiomics is working on how to turn Veillonella into a probiotic that’s available over the counter. This could give run-of-the-mill athletes a little boost, but more importantly, it could give sedentary people more capacity to exercise.

“Is it possible that introduction of a bug that might be missing in their microbiome, Veillonella, might help change that?” asks Kostic. “That’s, from a health perspective, I think the most important potential outcome.”

Scheiman says he was motivated to do this research thanks to his past as a college athlete. “When I didn’t make the NBA I got a Ph.D. in microbiology as a backup,” he says.

“[I’m] just really excited about the notion of working with the most fit and healthy people in the world and trying to understand what makes them unique and perform at an optimal level,” says Scheiman. “Can we translate that information into consumer health applications?”

“As an athlete and now as a scientist,” says Scheiman, “I think what excites me the most is bridging communities together to kind of create something entirely unique.”

Hundreds of Molecules Explain the “Taste” and “Smell” of Coral Reefs