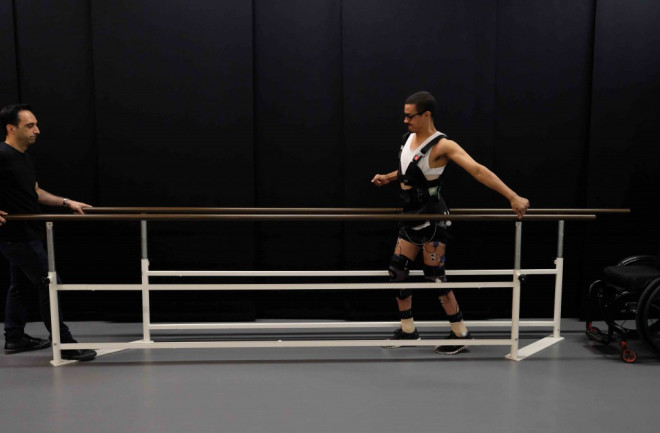 David Mzee, 28, a patient in the study, learns to walk again thanks to electrical stimulation. (Credit: École polytechnique fédérale de Lausanne) A spinal cord injury used to mean life bound to a wheelchair. Now, three spinal cord injury patients are able to walk and even ride a modified bicycle, new research shows. The trio got on their feet again thanks to well-timed and precise electrical stimulation in the spinal cord combined with rehabilitation. The results are just the beginning of improving recovery after spinal cord injury, the researchers say. “When I could let go of the bar on the treadmill ... walking hands-free really felt like more or less walking normally, and that was a really big achievement,” David Mzee, 28, one of the patients in the study, said in a media press briefing.

Mzee’s recovery comes thanks to an increasingly popular procedure known as epidural electrical stimulation, or EES, in which a surgically implanted device sends electricity down the spine. In research published last month by two other groups, five paraplegics regained the ability to walk with assistance from walkers because of the therapy. These patients received continuous stimulation from the device when using the treatment. Now, in one of two studies out today, Gregoire Courtine, a neuroscientist at the Swiss Federal Institute of Technology and Lausanne University Hospital in Switzerland, who led the new research, and colleagues report in the journal Nature Neuroscience that continuous stimulation can block a patient’s perception of where their leg is in space. “[That] is really detrimental to walk,” Courtine said. So in the second study, Courtine and his team designed the electrical device to deliver transient bursts of stimulation specifically to the nerves that control leg muscles. The precise electrical stimulation enabled study participants to take assisted steps on a treadmill within five days. The researchers also timed the electrical stimulation to the patients’ movements. This way “we can have a synergy between the voluntary brain command and the stimulation,” Courtine said. “This results in a much more powerful and more natural movement.” “Because we stimulate the spinal cord as the brain would do naturally, the stimulation feels a lot more physiological,” Courtine said. The patients trained four to five times per week for five months by walking on a treadmill or overground and performed muscle strengthening exercises. EES specific for a given task accompanied each movement.

Patient David Mzee was able to walk again thanks to physical therapy and an electrical implant that stimulated his spinal cord. (Credit: ) The protocol empowered patients walked on a treadmill for an hour with only 15 percent of their body weight supported. They each took more than 1,200 steps and covered more than half a mile, Courtine and colleagues report in the journal Nature. Two patients also gained the ability to walk using crutches without the electrical stimulation. One patient was even able to take several steps completed unassisted. Finally, patients were able to walk outside and ride an arm- and leg-powered bicycle using a personalized voice-activated watch to turn the electrical stimulation on and off. Although the participants’ recovery is remarkable, Courtine suggests keeping expectations in check. “This is a proof of principle on these three individuals,” he said. But adds that in the future, “the key will be to apply this type of optimized technology very early after the spinal cord injury when the potential for the growth of new nerve connections is more pronounced.”