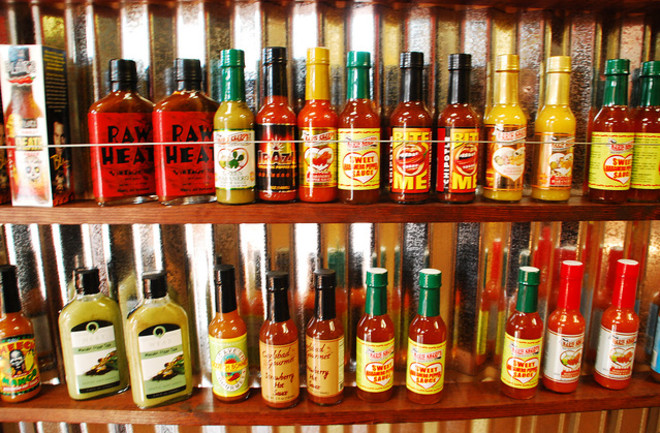 We know from previous research that testosterone levels are correlated with spicy food consumption. But how does all that spicy food actually affect your health (if at all)? These researchers used a large population-based survey that took place from 1988 to 1994 to examine the relationship between chili pepper consumption and mortality. They found that chili pepper consumption is correlated with a statistically significant 13% reduction in "instantaneous hazard of death." While this remains a correlation (and not causation), we think it couldn't hurt to (judiciously) dump more hot sauce onto your next meal. At the very least, you'll be more manly.

The Association of Hot Red Chili Pepper Consumption and Mortality: A Large Population-Based Cohort Study "The evidence base for the health effects of spice consumption is insufficient, with only one large population-based study and no reports from Europe or North America. Our objective was to analyze the association between consumption of hot red chili peppers and mortality, using a population-based prospective cohort from the National Health and Nutritional Examination Survey (NHANES) III, a representative sample of US noninstitutionalized adults, in which participants were surveyed from 1988 to 1994. The frequency of hot red chili pepper consumption was measured in 16,179 participants at least 18 years of age. Total and cause-specific mortality were the main outcome measures. During 273,877 person-years of follow-up (median 18.9 years), a total of 4,946 deaths were observed. Total mortality for participants who consumed hot red chili peppers was 21.6% compared to 33.6% for those who did not (absolute risk reduction of 12%; relative risk of 0.64). Adjusted for demographic, lifestyle, and clinical characteristics, the hazard ratio was 0.87 (P = 0.01; 95% Confidence Interval 0.77, 0.97). Consumption of hot red chili peppers was associated with a 13% reduction in the instantaneous hazard of death. Similar, but statistically nonsignificant trends were seen for deaths from vascular disease, but not from other causes. In this large population-based prospective study, the consumption of hot red chili pepper was associated with reduced mortality. Hot red chili peppers may be a beneficial component of the diet." Related content: Manly men like it hot!Why meat dishes are spicier than vegetable dishes.Scientists finally find a (delicious) cure for the common cold: french fries!