Earthing and Its Otherworldly Promises

A practice that involves touching the ground either directly or via wires claims to treat many common health issues. But with little published research on the subject, its efficacy remains unclear. 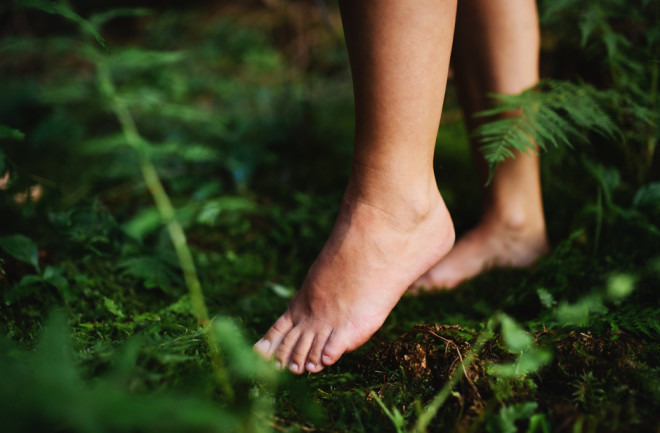 Nowadays, it’s far easier to fantasize about sinking one’s toes into warm sand or dewy moss than to find the time or setting to actually do it. Most lifestyles in industrialized countries provide scant opportunities to connect directly with nature. Yet the common separation from flora and fauna is relatively new in the long march of human existence. For most of our history, Homo sapiens have spent our days shoe-free: We walked barefoot up to around 40,000 years ago, and cushioned footwear didn’t arrive until approximately 300 years ago.

A lack of touch with the Earth’s surface could contribute to widespread ailments, such as chronic illnesses and immune disorders, according to advocates of a unique practice some call earthing or grounding. And some small, limited studies suggest the technique might help treat hypertension and diabetes, improve mood and reduce stress, among other claims. Though, replicating such studies has proven difficult, and plenty of experts question the science.

Earthing is accomplished by touching bare skin directly to terra firma, or by utilizing products such as mats and patches with conductive wires attached to a metal rod or other sources that touch the Earth, including grounded wires.

The idea is that these methods provide a supply of electrons from the Earth’s surface, according to Gaétan Chevalier, a physicist who directs the Earthing Institute, a nonprofit that organizes research on the subject and promotes associated products. “The fact that we evolved in contact with the Earth gave us a certain energy that all life used for lengthening their lives, which is the surface electrons of the Earth,” he says.

Such electrons are purported to balance our inner electrical environment: They’re thought to neutralize reactive oxygen species (commonly referred to as free radicals) within the body that contain atoms with unpaired electrons. Scientists have found that excessive amounts of free radicals likely wreak havoc in the body by damaging cells, triggering inflammation and aiding in the development of conditions such as cancer, irritable bowel syndrome, coronary artery disease, and Alzheimer’s.

In Chevalier's view, our inner charges are thrown out of whack via “perturbations” in our environments, such as electromagnetic waves from Wi-Fi and cell phones. (But the claim that relatively low levels of electromagnetic waves can affect one’s health is mired in misinformation and controversy.)

Chevalier, who has a background in engineering physics, says he thought earthing sounded too good to be true when he encountered it over a decade ago — until he researched it for himself.

The technique can be traced back to late 19th-century Europe, where a prominent social movement urged a return to nature and encouraged ditching shoes outdoors — even in frigid temperatures. Then in the 1920s, a U.S. doctor named George Starr White subjectively reported improved sleep quality while connected to copper wires that were attached to home pipes. Then, former TV executive Clint Ober advanced the concept. Ober compared the human body, “a bioelectrical, signal-transmitting organism,” to grounded TV cables that resist signal interference. Now, you can find a range of books on the subject (one of them by Ober) and a variety of specialized products, including grounding flip-flops that incorporate “conductive carbon and rubber plug technology.”

One caveat in all of this is that it’s unclear whether electrons sourced from the Earth’s surface can trigger any physiological effects, says Chad Orzel. The physicist at Union College wrote a colorful 2014 blog post railing against earthing’s legitimacy.

We can generate a potential difference (or, voltage) between ourselves and the ground when we come into contact with surfaces that “grab electrons,” Ober noted. So touching the ground could equalize this potential and facilitate the travel of electrons between the human body and the Earth. Yet, Orzel refutes that this transfer accomplishes much of anything.

“There’s absolutely no difference between electrons that come from the ground or come from anything else in the universe that you touch,” he says. If such a difference did exist, chemistry couldn't operate as we know it, Orzel explained.

In response, Chevalier points to a 2008 paper by biophysicist and Earthing Institute advisory board member James L. Oschman, who states that standard scientific models can’t account for the details of this transfer, nor for the mechanisms behind plenty of other unconventional therapies. “A closer look at the electronic aspects of biology will help everyone understand alternative approaches, and will require revision of many textbooks,” Oschman claimed.

Regardless, earthing cords incorporate a powerful resistor, Orzel points out. While it’s meant to prevent electric shock, this feature could technically hinder the movement of electrons promised to users in the first place. This resistance value was chosen to balance both safety and efficacy, Chevalier says.

Beyond theoretical concerns, earthing studies tend to involve relatively tiny subject sizes: around 50 people at most. And while Chevalier and his colleagues have incorporated some techniques associated with rigorous research such as double-blinding and placebos (wires that aren’t connected to the Earth), their work has sometimes proven inconsistent. A 2010 Journal of Alternative and Complementary Medicine pilot study on grounding’s potential to reduce muscle soreness found favorable results that weren’t replicated in a 2015 article published in the Open Access Journal of Sports Medicine, as pointed out by medical biophysicist Sarah Ballantyne.

Chevalier says he and his colleagues are currently looking into more extensive research, but mainstream bias can make funding difficult to come by. It can take several decades for a new treatment to gain proper recognition, he adds, and earthing studies only emerged in the early 2000s. “There’s this bias that everything simple like this would have been [already] discovered,” he says.

It’s possible that earthing subjects do experience the effects assured by Chevalier and other scientists — but these could stem from the placebo effect, Orzel says, despite the use of placebo wires in various earthing studies.

This claim aligns with Western medicine’s tendency to assign difficult-to-quantify advantages from homeopathic techniques as mostly mental. Nevertheless, integrative medicine as a whole has gained some legitimacy in the eyes of the allopathic community in recent decades. For example, the National Institutes of Health (NIH) founded a center for complementary care in 1992 that funds studies on alternative techniques such as yoga and acupuncture.

Mainstream science now flirts with the legitimacy of the biofield, which was defined by an NIH committee as “a massless field, not necessarily electromagnetic, that surrounds and permeates living bodies and affects the body.” Some think it may include components such as the electromagnetic field and low-energy ultraviolet emissions. The biofield’s presence could explain the impacts of alternative medicine practices such as reiki and qigong. It might even account for unusual phenomena that modern medicine can’t necessarily address, such as phantom limb pain.

Rick Leskowitz, a retired psychiatrist who consults at the Harvard University-affiliated Spaulding Rehabilitation Hospital, has researched the science behind biofields and incorporated seemingly outlandish techniques like tapping into his work with patients experiencing chronic pain. At medical school in the late 1970s, Leskowitz says he received odd looks when suggesting meditation to help treat certain disorders — while little journal research on the subject existed then, the practice is now widely considered useful by allopathic institutions. Acupuncture has also caught the attention of authoritative health institutions.

“I think we’re at the same stage now with things like earthing and there isn’t a huge body of research, so people can sort of get away with dismissing it,” Leskowitz says. “Same with acupuncture, people used to really think it was nuts."

Only time will tell, however, whether grounding can deliver on its promises — and if they indeed come from Earth-derived electrons, or just the belief that it’s working.