Researchers say helmet usage would keep more riders out of the emergency room. 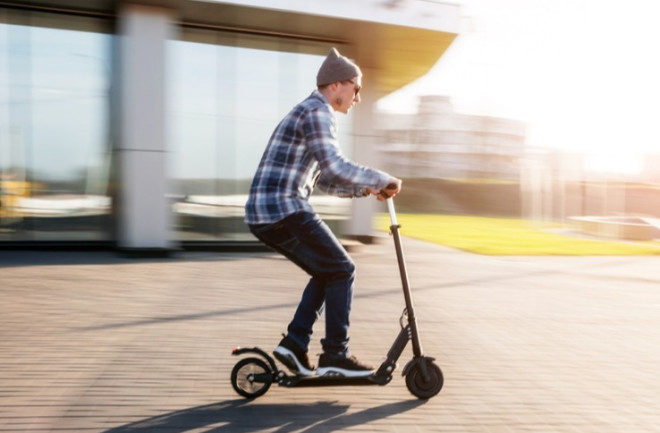 As more e-scooters cruise through city streets, a growing number of their riders are ending their trip in the hospital.

From 2017 to 2018, the number of emergency room injuries due to e-scooters rose from about 8,000 to 14,600, according to a new research report published in the journal JAMA Surgery. A third of the injuries in 2018 involved the head. For comparison, only about a sixth of hospitalized cyclists have head injuries.

It was a little surprising to see such a high proportion of e-scooter accident-related head injuries, say the authors, and it's concerning. Head injuries are “the most important injury you want to prevent aside from death,” says Ben Breyer, a report co-author and urologist with the University of California, San Francisco. The results show how important it is for e-scooter riders to wear helmets — something not all local laws or e-scooter companies require.

The number of rides on this two-wheeled mode of transport more than doubled between 2017 and 2018, to about 84 million trips. Their popularity makes sense: The devices zip people around town and, for the many riders relying on a device offered by a short-term rental company, can be parked wherever is convenient.

More motorized scooters on the streets has meant more injuries, however. In a study released late last year of 36 e-scooter riders who got into accidents, X-rays revealed broken bones and other trauma in 19 of them. Over the course of a year-long study ending in 2018, two Southern California hospitals saw almost 250 e-scooter injuries, with 40 percent involving the head. Since much of this research involved cases near and around specific hospitals, Breyer — who also studies bike-related accidents — wanted a better sense of what national trends were.

The new study, based on nationwide records of emergency room injury reports from 2014 to 2018, showed the number of e-scooter injuries increased year to year, with the largest jump from 2017 to 2018. Also in 2018, the most-injured age group shifted from those under 18 to riders between 18 and 34 years old. Across all four years of data, head injuries were the most common. Regardless of what part of the body took a hit, fractures were the most common type of injury, followed by contusions (bruising) and abrasions. Men accounted for about two-thirds of all cases, and the vast majority of recorded injuries came from urban hospitals.

Breyer suspects that scooter riders might be more prone to head injuries compared with cyclists partly due to posture: Standing upright on a scooter makes it harder to protect your head if you fall, compared with cyclists who are already in crouched positions. But, more importantly, scooter riders don’t appear to be wearing helmets. Other e-scooter accident reports found only 2 to 4.4 percent of patients bothered with headgear.

The way hospitals log their injury data prevented Breyer and his team from studying what kinds of head injuries physicians saw, or their severity. “While it could be minor and have no long-term issues, sometimes they can be incredibly devastating and lead to long term disability,” Breyer says.

E-scooter providers often suggest that riders wear a helmet and occasionally hand out protective gear, but company enforcement is spotty. Some rental services even show advertisements of riders without any protective gear on. Legal requirements are also inconsistent. For example, California e-scooter riders over 18 are no longer required to wear helmets; and, while Atlanta has banned nighttime e-scooter use, the city still only suggests that riders use headgear.

At least one scooter company has offered discounts for riders who submit selfies showing them wearing a helmet, and Breyer thinks it would be great if scooter companies could offer rentable helmets as well. Though there might be some logistical issues to work out, “It would be an important safety step, and I would commend companies if they were working on it.”