Drink Your Beets: The Science Behind the Vegetable's Surprising Benefits 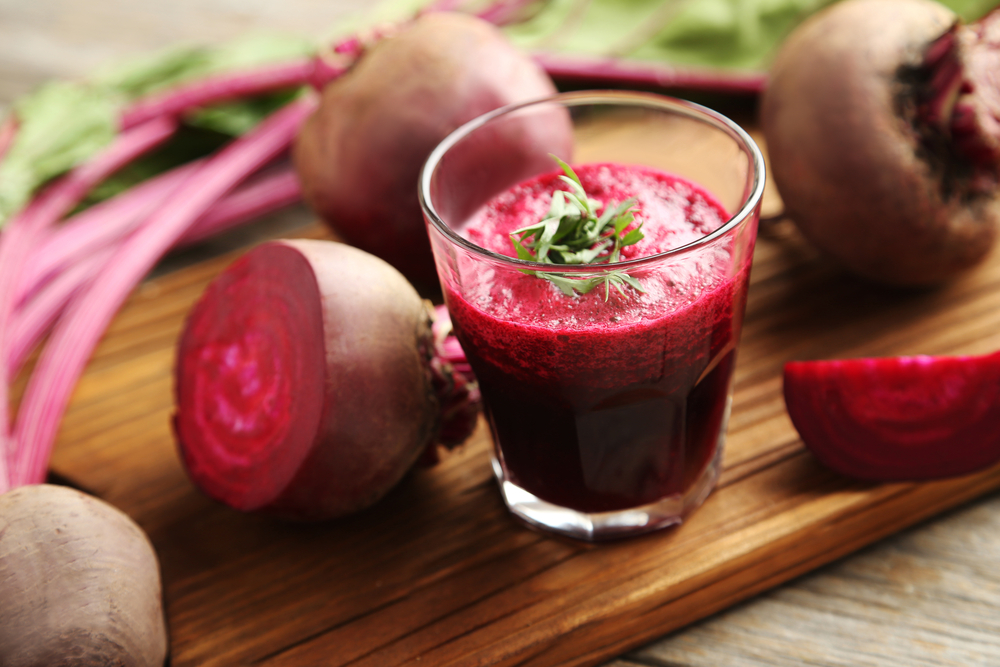 (Credit: 5 second Studio/Shutterstock) Carnitine, chromium, anabolic steroids: Athletes have experimented with a broad array of aids in pursuit of a performance edge. A popular — if unglamorous — one today that seems safe and backed by solid data: the juice of beets, for the nitrate it contains. Inorganic nitrate (NO3^-) is added to cured and processed meats to extend their shelf life and give them their distinctive pink color. It’s also naturally found in spinach, arugula and beets. In the past decade, new evidence has suggested that the nitrate in these vegetables enhances athletic performance and may also increase cardiovascular health in old age. The first clue came in 2007, when Swedish researchers reported that three days of sodium nitrate supplementation lowered the oxygen demand of nine cyclists and triathletes as they worked out, compared with a placebo of table salt. It also increased the blood plasma levels of nitrite (NO2^-), a byproduct of nitrate. That study caught the eye of exercise physiologist Andrew Jones of the University of Exeter in England. Usually, the oxygen demand of exercise is fixed, he says, so for a short-term intervention to change that “was unusual.” Although it wasn’t clear how nitrate was doing what it did, Jones knew that green leafy vegetables and beets were rich sources. So he conducted a study, reported in the Journal of Applied Physiology, giving eight men active in recreational sports an equivalent amount of nitrate in a natural food source: beet juice. The volunteers consumed 500 ml (17 oz) of either beet juice or a black currant drink — which has negligible amounts of nitrate — every day for six days. Then, after a break of 10 days, the groups were switched and consumed the other drink for an additional six days. By the last three days of the six, nitrate concentration in the blood of those drinking beet juice was almost doubled and their systolic blood pressure fell by an average of 6 mm Hg. The oxygen cost — the amount of oxygen consumed — when they exercised on a stationary bicycle was reduced by 19 percent. “When we asked them to continue to exercise to exhaustion, they were able to go longer,” recalls Jones, who coauthored a review on dietary nitrates in the 2018 Annual Review of Nutrition. From then on, research on beet juice, beet juice concentrates, whole beets and nitrate salts started to pour in.

From Food to Fuel

Nitrate itself doesn’t do much in the body. It first has to be converted to nitric oxide, a gas with numerous physiological roles — in blood vessel dilation, muscle contraction and transmission of nerve signals, among others. People obtain that nitric oxide in two ways: either through the action of the enzyme nitric oxide synthase, which catalyzes the amino acid L-arginine to produce it, or from nitrate ingested in food. In the second case, dietary nitrate is first reduced to nitrite by bacteria in our mouths (athletes are counseled to avoid mouthwash, toothpaste and antibiotics before these kinds of studies). And then, over the next several hours, some of the nitrite is further reduced to nitric oxide in the gut. Nitrite also enters the blood and bodily tissues, where it is enzymatically reduced to nitric oxide. 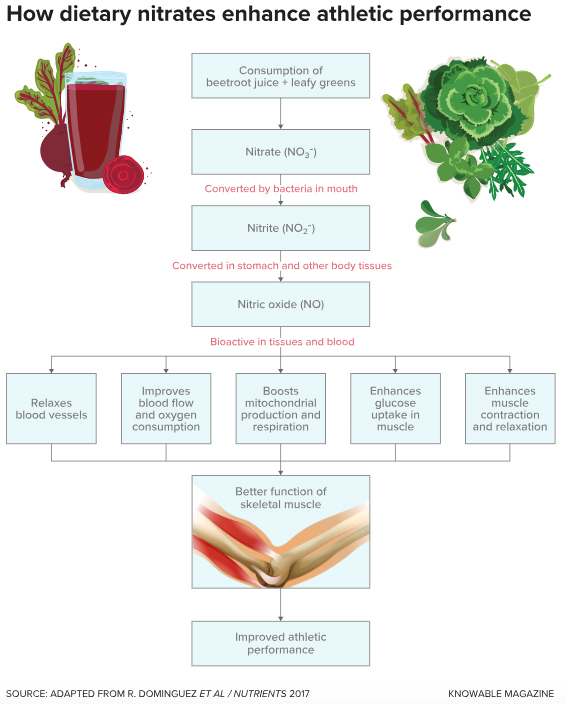 This chart shows how dietary nitrate can act to enhance athletic performance. Although nitrate itself is not physiologically active, it is ultimately converted to nitric oxide, which can improve muscle and cardiovascular function through a variety of effects on the body. Scientists know that this second route is enhanced under conditions when there is not enough oxygen in muscles, and when acid builds up — exactly what happens in skeletal muscle when it contracts constantly during exercise. So they hypothesize that this pathway is particularly important during exercise as a backup system to ensure that enough nitric oxide gets made in muscles and other tissues. Once in skeletal muscle, nitric oxide can do several things. It can improve the efficiency of muscle contraction and of energy generation by mitochondria. Both of these could contribute to the lowered oxygen cost of exercise. So could the gas’s property of dilating blood vessels, as it increases blood flow to muscle.

Studies testing the effects of dietary nitrate in different sports are piling up. Beet juice is the preferred method of administration, since it’s a fluid and measuring the nitrate levels in it is easy. (“It’s just more convenient,” says Jones.) In a 2011 study in Medicine & Science in Sports & Exercise, for example, Jones and his team asked nine competitive male cyclists to drink 500 ml of beetroot juice containing almost 400 mg of nitrate, 2.5 hours before starting a 4 or 16.1 km cycling endurance test. Researchers found that the men who drank beet juice improved their performance by 2.7 percent in the 4 km test and 2.8 percent in the 16.1 km test, compared to men who drank a nitrate-depleted beet juice. In another study, published in 2015 in the International Journal of Sport Nutrition and Exercise Metabolism, Australian researchers gave five professional female kayakers two 70 ml (2.4 oz) shots of beet juice, each containing about 300 mg of nitrate, two hours before a 500-meter kayak test. Compared to a placebo, the rowers who drank beet juice improved their performance by 1.7 percent. After many such experiments, mainly with runners and cyclists, researchers have concluded that nitrate supplementation lowers the oxygen demand of exercise and improves performance in endurance sports. They find that beet juice is most effective when drunk two to three hours before exercise and, in general, that 300 to 500 mg of inorganic nitrate is enough to provide a 1 to 3 percent improvement in performance — significant enough to give a serious athlete a competitive edge. Solid vegetables, though they’re not generally used in such studies, can be effective, too: Beetroot and spinach contain more than 250 mg of nitrate per 100 g (3.5 oz) of produce. 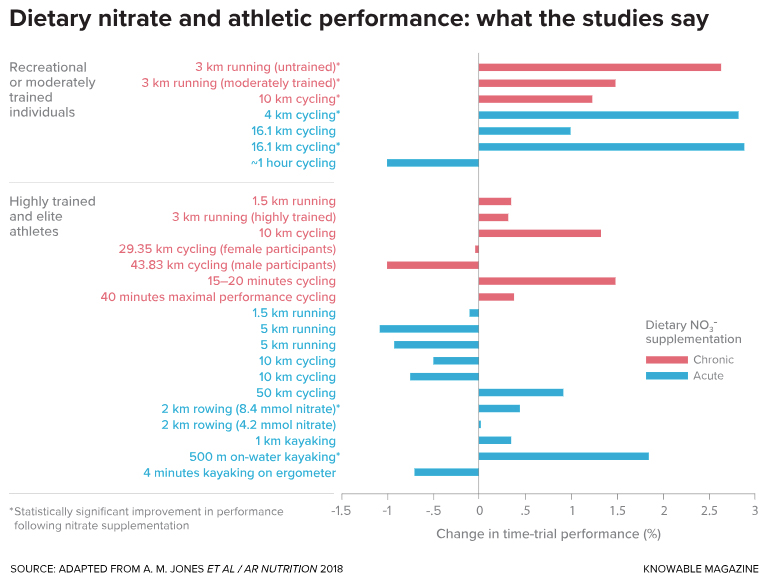 Here’s a roundup of studies looking at dietary nitrate’s effects on performance for elite and recreational athletes. Both short-term (acute) and longer-term (chronic) regimens were tested. Results that reached statistical significance are marked by an asterisk. Recreational athletes may gain more from nitrate supplementation than highly trained athletes; other potential factors are the dose and duration of nitrate supplementation as well as the duration, intensity and type of exercise. “What intrigues me the most, I think, is the fact that a simple dietary intervention can have these significant effects,” says Andrew Coggan, an exercise physiologist at Indiana University – Purdue University Indianapolis. “And then to think that is having a direct and quantifiable impact on our muscle function is rather striking.” While the immediate effects of nitrate on endurance are clear, researchers don’t yet know whether steadily drinking beet juice over days has stronger effects. So far, the evidence is mixed. Researchers are also eager to know whether the juice offers an edge in other types of “explosive” sports, where power and strength are key. Sports nutrition researcher Raúl Domínguez of University Isabel I in Spain recently reported in the journal Nutrients that 70 ml of beet juice concentrate improved the performance of 15 volunteers in a 30-second cycling sprint. Though there’s still more work to be done, “it seems that we can use it in all modalities,” Domínguez says.

The Business Side of Beets

Though the flavor’s not to everyone’s taste (Coggan refers to it as “sweet dirt”), the hype for beet juice has grown with every new study, and one can now find plenty of beet juices, concentrates, energy bars, capsules and powders that promise, or imply, enhanced performance. The International Olympic Committee’s acknowledgement last year that beet juice is a sports food with good scientific evidence to back it — along with other ergogenic aids, or endurance enhancing supplements, such as caffeine, creatine and sodium bicarbonate — has only fueled beet juice enthusiasm. But because these products are not regulated by the US Food and Drug Administration, consumers often can’t know for sure how much nitrate they contain. Last year, Coggan and an undergraduate tested 24 products, from powders to concentrates and bulk juice, and found that only five contained effective levels of nitrate. Some companies are adding pure nitrate salts to sports drinks and supplements, “which is scary to me,” says sports nutritionist Edward Weiss from Saint Louis University in Missouri. He strongly recommends using the juice instead of the salts. “There’s a lot of plant chemicals that prevent the conversion of the nitrate into a carcinogen that we know about, called nitrosamine,” he says. What is more, says Domínguez, studies suggest that the benefits of dietary nitrate are larger when they’re ingested in beets and other vegetables, and not as salts — mainly due to the vegetables’ vitamin C and polyphenols, which help reduce the nitrite to nitric oxide in the stomach.

Not Just for Athletes

Dietary nitrate has done more than start a little revolution in the sports world. Now scientists are looking at its effect in other populations, too. Coggan says that after he read about the studies with athletes, he thought: “If there was any patient population out there that could benefit from getting the most bang from their buck, it would be heart-failure patients.” Could beet juice enhance the heart’s ability to deliver oxygen-carrying blood, and help keep the skeletal muscle strong, in such patients? In a 2015 study reported in the journal Circulation, Coggan and colleagues reported that giving beet juice to nine patients with heart failure increased the nitric oxide levels in their breath by as much as 50 percent and their knee muscle power by as much as 11 percent, as measured with a dynamometer. That difference might improve patients’ quality of life by enabling them to more easily perform day-to-day activities such as getting out of a chair. Researchers are now looking at the potential therapeutic benefits of dietary nitrate in elderly people, as well as in those who have diabetes, obesity and hypertension. For Coggan, the fact that a single component of a healthy diet can have such a clear effect is startling. “And then you start to wonder about — well, what other components of our diet are having measurable effects, and people just haven’t made the link yet?”

Rodrigo Pérez Ortega is a science writer and intern at Knowable Magazine. He too thinks that beet juice tastes like “sweet dirt,” but it also evokes joyful childhood memories. You can find him at rodrigoperezortega.com and on Twitter as @rpocisv.