Dogs that look like puppies are more likely to be adopted. 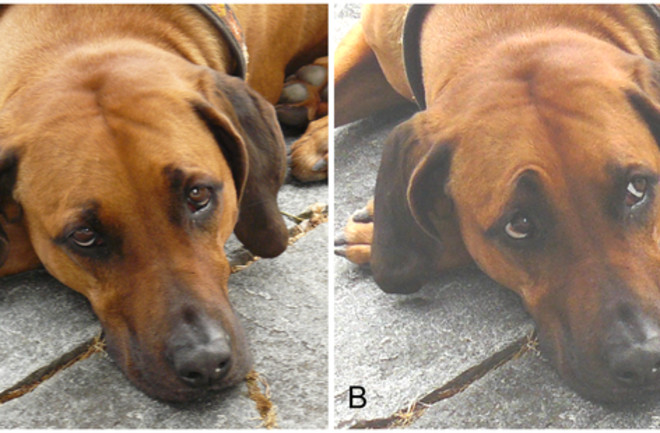 Figure 1. Example of facial movement AU101 (inner brow raiser) in a domestic dog , increasing the height and overall size of the orbital cavity (eye): A) neutral on right side of face, B) AU101 on right side of face. Domestic dogs who produced a high frequency of this facial movement were adopted more quickly from shelters. If you're a dog in a shelter and want to be adopted, read this: according to this study, dogs with more puppy-like facial expressions have a selective advantage when it comes to being chosen. A group of psychologists made videos of dogs in an animal shelter and rated them for the frequency of different facial expressions. Those dogs with a higher frequency of puppy-like (paedomorphic) facial expressions (see Figure 1) were more likely to be adopted during the period of the study. The authors suggest that the sensitivity of humans to these baby-like cues probably played a role in the evolution of domesticated dogs. Paedomorphic Facial Expressions Give Dogs a Selective Advantage "How wolves were first domesticated is unknown. One hypothesis suggests that wolves underwent a process of self-domestication by tolerating human presence and taking advantage of scavenging possibilities. The puppy-like physical and behavioural traits seen in dogs are thought to have evolved later, as a byproduct of selection against aggression. Using speed of selection from rehoming shelters as a proxy for artificial selection, we tested whether paedomorphic features give dogs a selective advantage in their current environment. Dogs who exhibited facial expressions that enhance their neonatal appearance were preferentially selected by humans. Thus, early domestication of wolves may have occurred not only as wolf populations became tamer, but also as they exploited human preferences for paedomorphic characteristics. These findings, therefore, add to our understanding of early dog domestication as a complex co-evolutionary process." Related content: NCBI ROFL: Introducing...the automatic LOLcat detector!NCBI ROFL: A scientific analysis of 400 YouTube videos of dogs chasing their tails.NCBI ROFL: What makes a cute baby cute?