Dogs Can Smell Lung Cancer on Your Breath, Even If You've Just Had Lunch 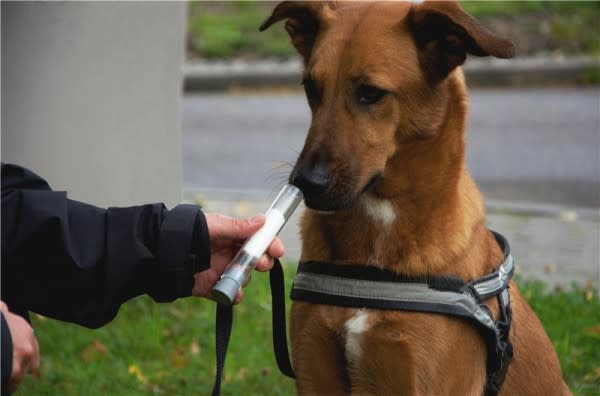 Specially trained sniffer dogs can smell something on the breath of lung cancer patients.

Dogs will sniff anything and everything, and can even tell identical twins apart by scent

. And tumors, you may be surprised to learn, have their own very faint smells. To figure out how to diagnose internal cancers that are frequently overlooked until too late from just a breath sample, scientists have been working with dogs to see if these smells can be reliably differentiated from, say, the smell of breakfast, that last cigarette, or emphysema. In previous studies, dogs have already shown their scent savvy in detecting established cases of ovarian cancer

. In the latest study

, which investigated how well dogs could make a diagnosis in the presence of other scents on a patient's breath, canine breathalyzers not only smelled lung cancer even when a patient had recently eaten or smoked a cigarette, they also, importantly, didn't mistake other scents, like those of emphysema or tobacco smoke, for cancer. This confirms the idea that lung cancer has a very specific scent of its own, and will galvanize researchers in their quest to identify exactly what the dogs are picking up on. One thing to note, though: For the purposes of training dogs to identify the disease's signature, studies of this sort usually use patients' whose cancer has already been diagnosed and is more advanced that one might like. Early stages of the disease might have different or less noticeable markers in the breath, and studies that work only with early stage cancer, or collect many breath samples over time and see who develops cancer and when dogs start to pick up on it, would be a welcome addition. Once a good chemical signature for early-stage lung cancer is deduced, scientists can finally put into action the electronic "noses"

they have been developing for years: these super-sensitive chips can alert doctors to the presence of certain chemicals in the air, whether they are from bombs, rotting food, or cancer. [via ScienceDaily