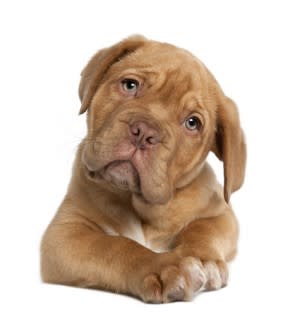 from the trash, you'd probably take Rover to the vet. If you're a vet and your dog eats thallium-tainted agar plates, you start taking notes---and blood and hair samples too. That's the backstory to a recent paper

. The poisonous compound is used in labs to isolate Mycoplasma fungi

because it pretty much kills everything else that could grow on agar. Known as "the poisoner's poison," thallium has also been implicated in a number of famous murders

and was a favorite of Saddam Hussein. (So if you are a non-scientist with thallium in your trash, it is kind of suspect...) The dog's owner, a vet, knew immediately the thallium was bad news. At the onset, the dog refused to eat and lost weight. And then things only got worse over several weeks as she lost control of her muscles, seized, caught pneumonia twice, and lost a third of her fur. She had to be fed through a tube. It took 10 months for her to even bark again. Over those months, the dog was carefully monitored with blood and hair samples, and the paper ends by summing up its contribution to science: "The reported blood and hair thallium concentrations determined at various time points after exposure are useful data to diagnosticians investigating dogs with potential thallium poisoning." While we're glad this dog's suffering was not in vain, we had to wonder how common thallium poisoning really is. Thallium used to be a common pesticide, but that's been banned because it's also such a potent human-cide. Outside of biology labs, thallium can be found in electronics and glass manufacturing or nuclear reactors, so please don't bring your dog to work if your job is in any of those places. But...what did we say about it being suspicious to have thallium lying around at home? A literature search brought up this very disturbing case report

of a thallium-poisoned pit bull. No accidental poisoning here:

The boyfriend of the owner’s mother was suspected of poisoning the mother, the owner, 2 of the owner’s siblings, and several visitors. Thallium sulfate powder (99.8% pure) had been purchased from a chemical supply company through the Internet under false pretenses. Exposure of the human victims and the dog was a result of ingesting thallium-tainted food and beverage.

In short, do not eat mysterious agar plates in the laboratory and do not eat anything from your mother's suspicious boyfriend.