Does cursing at the referee make a penalty more likely? 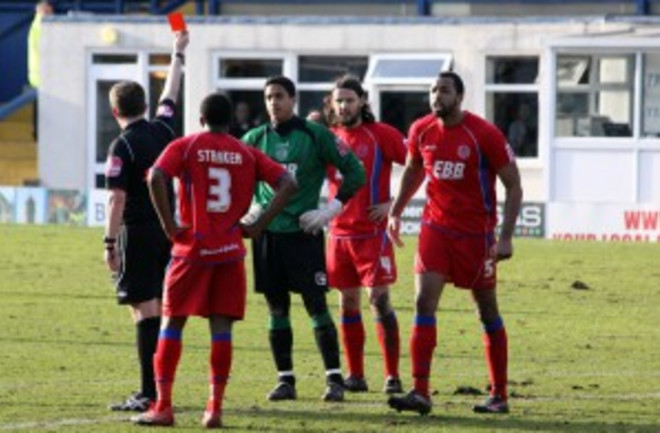 When you're a soccer player, verbally abusing the referee is probably not the best idea--in fact, according to the soccer rulebook, it's an automatic red card. But is this always the outcome in a real game? Here, a group of researchers from Austria surveyed soccer referees to find out whether they would actually give red card after being cursed at. The subjects took a survey that included a list of 28 swear words, and they were asked how they would respond if they were called these names during a real game. Turns out that the type of insult was a major determinant of the response: "sexually inclined words or phrases" were more likely to earn a red card than "terms insulting one's appearance." With the Superbowl coming up, we wonder whether these results are applicable to other sports as well?

May I curse a referee? Swear words and consequences. "The purpose of this study was to determine whether male and female soccer (football) referees would execute the Laws of the Game despite players' verbal abuse. Law 12 (Fouls and misconduct) instructs the referees as to how they should react when a player, substitute or substituted player expresses a swear word. The player should be issued a red card. Referees (n = 113) were presented with 28 swear words and asked how they would respond if this situation occurred in a real game (red card, yellow/blue card [blue cards are used in juvenile games, player leaves field of game for 10 minutes], admonition, no reaction). The selected words were divided into categories (such as pertaining to intelligence or sexual abuse) indicating different degrees of insult. Approximately half of the referees would have responded to players saying swear words in a game by issuing a red card (55.7% red card, 25.2% yellow/blue card, 12.1% admonition, and 7.0% no reaction). The response was independent of the referees' qualification and experience. It was found that the insulting content of a swear word determines the referee's decision. Referees would apply Law 12 only in one half of the cases, depending on the insulting content. The findings are discussed in the context of game management. Related content: NCBI ROFL: World Cup Week: Vuvuzela – Good for your team, bad for your ears.NCBI ROFL: World Cup Week: Celebrate FTW!Red sports teams are more likely to win.