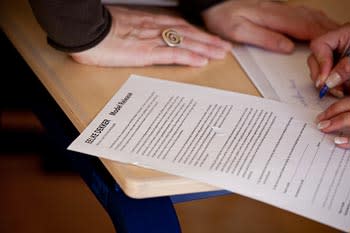 If you talk smack on Yelp, it's coming down.

What's the News: Sign here, here, here, and here—that’s the first thing your doctor’s office asks you to do. Chances are, you’re not reading the forms too closely. But tucked in there might be a little clause that goes something like this: “all your online reviews are belong to us.” And if you refuse to sign it, they’ll refuse to see you. Doctors and dentists have started including this language, provided by an organization called Medical Justice

, in their releases in an effort to keep negative online reviews from going up on sites like Yelp. But, as Ars Technica found

, there are about a million different ways that this is both silly and pointless. How the Heck:

The Future Holds: Doctors need all the help they can get with frivolous lawsuits, and Medical Justice, which comes out from this affair looking pretty ridiculous, if not flat-out malevolent, might do some decent work in that department. But this is an area of defamation law where doctors don’t need to call in the armies. If they’re worried, maybe they need to do what other business owners do: ramp up their customer service and engage negative reviewers to see if they can rectify the wrong. (via Ars Technica