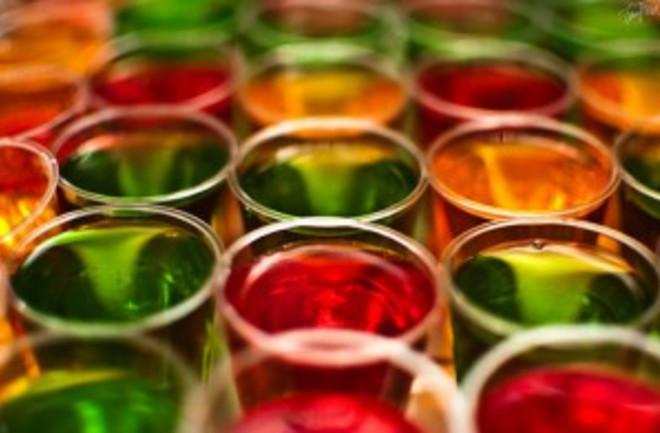 Photo: flickr/TMAB2003These researchers had a problem: they wanted their rats--an animal model for the effects of alcohol consumption on the brain--to voluntarily drink alcohol without having to restrict their food and water. So, perhaps inspired by their surroundings at the University of Florida, the scientists decided to see if jello shots would work. Lo and behold, the rats loved them (even with probes embedded in their brains to monitor ethanol concentration)! Just add that to the list of things that undergrads and rats have in common.Brain ethanol levels in rats after voluntary ethanol consumption using a sweetened gelatin vehicle. "A novel procedure for initiation of voluntary ethanol consumption in the rat was evaluated in terms of ease of initiation, consistency, and resulting brain ethanol levels. The "jello shot" consists of 10% ethanol in gelatin along with a caloric source (Polycose). Initiation of "jello shot" consumption in Sprague-Dawley rats required no food or water restriction and resulted in initial daily (8.4+/-0.6 g/kg body weight) and eventual hourly (1.1+/-0.1 g/kg body weight) intake of ethanol comparable to other procedures using either alcohol-preferring or non-genetically selected rats. Rat intake of ethanol via "jello shots" recovered quickly from environmental alterations and surgical implantation of a guide cannula. During 1-h free access sessions, consumption of the "jello shot" occurred during the initial 10 min and resulted in a dose-related increase in ethanol levels in nucleus accumbens measured using microdialysis. These brain ethanol levels were comparable to those achieved using other self-administration methods. However, when 0.5 g/kg ethanol was gavaged either in "jello shot" or saline, there was about a 20% decrease in brain ethanol concentrations after gavage of the "jello shot" compared to saline. Even so, lack of a need for initial food or water deprivation and the rapidity with which stable self-administration can be achieved both suggest utility of the "jello shot" as a completely voluntary ethanol procedure." Bonus figure from the main text:

Figure 1: A graphic representation of the “jello shot” procedure.