Do Melatonin Diffusers Help You Sleep Better — and Are They Safe?

Vaping melatonin is a thing. Here's what you should know about inhaling this sleep supplement. 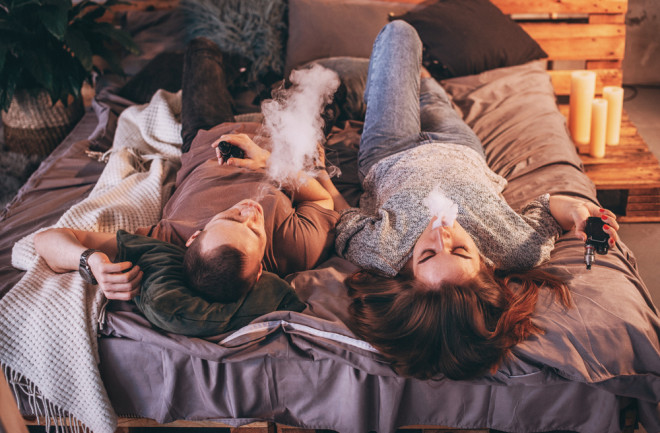 If you’ve ever had trouble falling asleep, odds are you’ve heard about (or tried) melatonin as a way to solve your insomnia. There are a multitude of ways to consume the sleep aid — from pills, to gummies. But melatonin diffusers, also known as vape pens, are the latest additions to the arsenal of products promising better shut-eye.

The first melatonin vape was introduced only five years ago. Because they’re so new, there aren’t many studies on the effects of vaping melatonin. And like all dietary supplements, these diffusers aren’t regulated by the Food and Drug Administration. This means that these products can go to market without any safety, purity or quality testing, which is a problem for the wellbeing of consumers.

While there’s no denying that a good night’s rest is an incomparable bliss, are melatonin vapes safe and effective?

Melatonin is a hormone produced by the pineal gland in your brain and is associated with control of your sleep-wake cycle. Essentially, melatonin helps your body know when to rest and when to wake up through how much your body releases. Your body normally makes more melatonin after the sun sets to signal when to sleep, and less as the sun begins to rise in the morning to wake you up.

This increase and decrease in melatonin occur if your sleep-wake cycle, also known as your circadian rhythm, is stable. If this cycle is disrupted, whether it be from an all-nighter, stress, or jet leg, then you’re likely to have a harder time falling asleep or sleep less restfully. When this happens, taking melatonin supplements, a synthetic version of the same thing your body naturally produces, is usually a relatively harmless way to help get your sleep cycle back on track.

But What Are Melatonin Diffusers?

In recent years, you might’ve noticed advertisements for melatonin vapes — or, to use wellness terms, melatonin “diffusers” — showing up on your Instagram feed. Social media influencers portray them as a fun and trendy way to get a solid night of rest. In addition to deeper sleep, the vapes purportedly bring on sleep quicker than an oral melatonin supplement.

The first melatonin diffuser came out in 2016, so they’re a relatively new thing within the realm of sleep aids. Today, there’s no shortage of brands that consumers can choose from. While they all hold a liquid that contains melatonin which the diffuser heats up to turn into a vapor that users inhale — delivered to you using pretty much the same device as any e-cigarette or Juul — some also come with different extracts or essential oils.

“If you're inhaling melatonin plus an essential oil, plus propylene glycol, is that trade off worth getting a faster melatonin effect?” says Marc Sala, assistant professor of medicine at Northwestern University specializing in pulmonology and critical care. “Especially compared to just taking the pill 30 minutes before bedtime?”

Are consumers willing to potentially sacrifice their lung health in order to fall asleep faster? It’s tough to say. But in October 2019, Google invited Cloudy to its Brand Accelerator program, created to provide support to brands that they believe have high-growth potential. Cloudy’s biggest selling point is that once their product is inhaled, melatonin is able to immediately enter the bloodstream through the lungs to help you “sleep on a cloud.”

Conversely, the liver must metabolize or break down a melatonin pill before it begins to work — which takes much longer. Experts recommend taking melatonin at least 30 minutes and up to two hours before bedtime.

If you forget to take it ahead of time and down some melatonin right before knocking out, you might mess up your sleep cycle even more since it takes so long to metabolize. By the time your liver breaks it down, you might end up increasing your melatonin levels while you’re asleep, making it harder to wake up and risking feeling groggy the next day.

Cloudy recommends avoiding those problems by inhaling seven times each night for a total of about 3.5 mg of melatonin, with approximately 0.5 mg of melatonin in each puff of Cloudy. The recommended dose for an individual is anywhere from 0.5 to 5 mg, so it’s not beyond the recommended limit of 5 mg. However, this is all approximation, and some people might need more or less.

“When you take melatonin with a pill, it's reasonably accurate to dose,” says Sala. “Vaping is a far less accurate way of trying to dose medication.”

Is Melatonin Safe to Inhale?

To cut the answer short: probably not. Inhaling anything besides oxygen or something a medical professional prescribed comes with its own set of health hazards. If you inhale any sort of vape liquid concoction, you’re covering the insides of your lungs with a vapor that has risks that are yet to be understood completely. At the very least, we don’t know if it’s safe yet.

“When we think about vaping, the use of inhaling something that also has additives is in general just something that we don't recommend,” says Sala. “I personally would never recommend inhaling melatonin, whether or not inhaling it as a sleep agent would be effective. Taking it [orally] has fewer uncertainties.”

So maybe play it safe and stick to swallowing a melatonin pill when you need to fix your sleep cycle.

More From Discover
Health
Walking vs. Running Benefits: Should You Walk or Run for Exercise?
Health
What is the Purpose of Hiccuping?
Mind
Gut Bacteria's Role in Anxiety and Depression: It’s Not Just In Your Head
Mind
What Psilocybin Psychedelic Mushrooms Are Teaching Us About Human Consciousness
Health
Is Vitamin C Actually an Effective Cold Remedy?
Health
Why Walking Might Be One of the Best Exercises For Health
Recommendations From Our Store
My Science ShopDiscover STEM Kits
My Science ShopDiscover 2022 Calendar
My Science ShopStrange Science
My Science ShopElements Flashcards
Shop Now
Stay Curious
Join
Our List