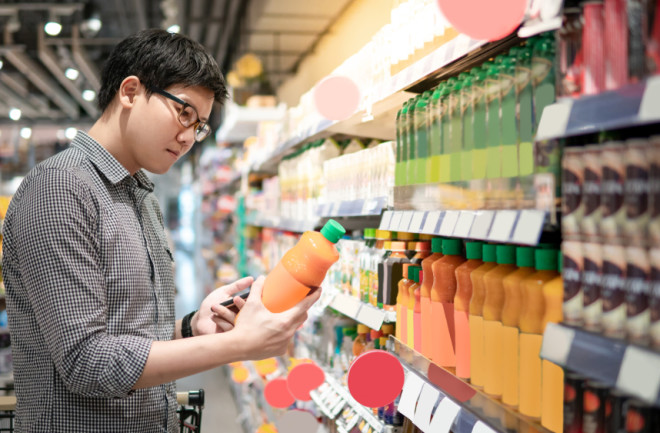 Food labels are more descriptive than ever. From gluten free to low fat, low sugar, vegan and everything in between, labels allow us to know more about the foods we buy. While we might have more information, that doesn’t necessarily mean we are using that information when choosing our food.

Researchers contend that food choices aren’t just about health, they’re made for a host of reasons that have to do with cost, habit and convenience. While in some cases, we do read and care about labels, that’s not the whole picture, says Eli Liebman, an assistant professor in the department of economics at the University of Georgia.

His findings, published in the Journal of Marketing Research, show that consumers have only a modest concern for health when making food choices. They’re also concerned with purchasing brands that they’ve purchased before and not surprisingly, price is another huge driver.

As part of the study, researchers used the third-party auditor Guiding Stars to rate whether foods were healthy in terms of calories, protein content, saturated fat, sugar, etc.

Researchers gathered information on food choices from consumers using their store loyalty cards. And they used informational interviews to glean whether people understood food labels, read them and used the information the labels provide.

“Labels play somewhat of a role in helping consumers to better understand how healthy food is, but for the most part we find pretty small impacts on consumption choices,” says Liebman.

In all, researchers found that 80 percent of participants said they understood the purpose of health food labeling, but only around 15 to 25 percent said they used labels to make decisions. Liebman suggests that those who don’t care about health might not pay much attention and those who do care about health already know what’s in their food. Labels impact those in the middle — the ones who want to be educated but aren’t quite there yet.

“Still, in the end, it’s only one factor in the decisions that people make,” says Liebman.

What About Fast Food Labeling?

In May of 2018, the U.S. mandated that fast food restaurants include calories on their menus as part of the Affordable Healthcare Act. But recent research has shown that calorie labels hardly impact consumer purchasing at all, says Beth Weitzman, professor of health and public policy at New York University.

It’s not completely clear what the biggest driver is in fast food settings and why calorically dense foods don’t sway consumers. But Weitzman thinks that there’s a few factors at play. She says that consumers don’t go to fast food restaurants because they think they’re healthy or because they think it tastes amazing. People eat fast food because it gets the job done. They have a short time for lunch, they’re rushed in the morning and in the evenings, they’re picking the kids up from school and sports, she says.

“The precious nature of time plays a major role. These places are easy to reach because they’re everywhere and they provide food fast,” says Weitzman.

What’s more, for those who purchase the same foods every time they go to a fast food restaurant, research has shown that they likely don’t look at labels. Many consumers might not even realize that their favorite fried chicken sandwich contains over a thousand calories. And if they don’t know that their daily allowance is 2,000 calories, they might not realize that the sandwich will take up half of their allotment.

It remains unknown whether new calorie requirements for menus at sit-down restaurant chains will have a bigger impact. If people have time to sit down and eat, are they more likely to care if their meal is healthy?

“We’re still wondering whether these labels can make more of a difference when people aren’t rushing,” says Weitzman.

A host of different factors, from health to convenience to habit, taste and price drive the consumer mind. And while researchers are finding that health is one driver, especially in the grocery store, it’s far from the only one. Helping consumers make healthier decisions is a complex task, especially when time and money are so limited.