A decline in socializing during COVID could mean less verbalizing for babies born during the pandemic. 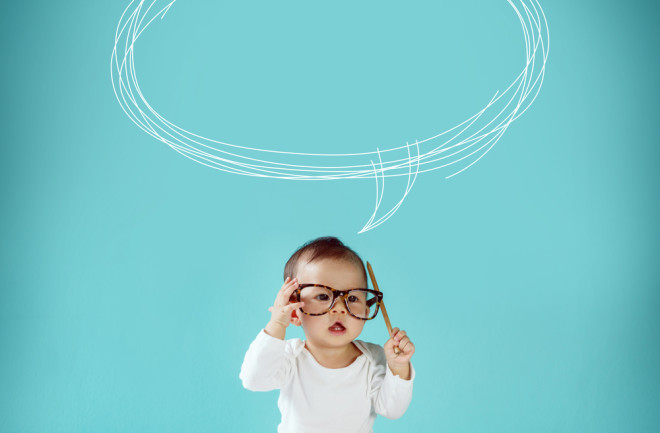 In late January 2020, I had my second child, a baby girl. By all accounts, the experience was similar to my first child, a baby boy born in 2015. In both cases, I went into labor a week before my due date, went through a natural birth at the same hospital and then took my daughter home to the same bassinet that my son had slept in five years earlier.

Everything was going swimmingly until a month later when a global pandemic swept the nation and all of the sudden our world shut down. Since then, my now two-year-old has known a different world than my son did, without travel, restaurants, playdates, birthday parties, baby music classes or preschool. And even as the world begins to open back up, she’s still unvaccinated and taking her places, especially indoors, presents a risk.

The fear is that my daughter, along with thousands of children born in the midst of a pandemic, may be at a developmental disadvantage because there is a lack of social contact. Experts are particularly concerned that COVID babies, who experienced little interaction with the outside world, might have more difficulty verbalizing than babies who were born outside the constraints of a worldwide pandemic.

Preliminary research found that "verbal, non-verbal, and overall cognitive scores [were] significantly lower since the beginning of the pandemic," says Sean Deoni, a pediatrics professor at Brown University.

Separate unpublished research also found a dip in words used throughout a child’s day, according to the LENA Foundation, a Colorado-based non-profit that used recording technology to track a child’s language. LENA Foundation has tracked children between the ages of two and 24 months with digital recorders worn in their front pockets throughout the day. Afterwards, researchers uploaded the information to a computer where an algorithm recorded the amount of times the children verbalized and communicated with adults.

The recording devices showed children vocalized less frequently and they also interacted less with adults in back and forth conversations, says Jill Gilkerson, chief scientific officer at the LENA Foundation.

"These early interactions are very important for a child’s developmental trajectory and we’re finding that vocalizations are going down the most in communities with less resources in disadvantages situations," says Gilkerson.

Clinicians and researchers are worried that parents were talking to their children less as a result of stress and time constraints, says Dani Dumitriu, an assistant professor of pediatrics, in psychiatry, at Columbia University. Less exposure to their peers in places like preschool, birthday parties and family get-togethers, as well as less diversity of experiences may also impact their development.

"Mask usage is also a concern because of what it might do to a child’s ability to pick up the language more quickly. Masks may create a disconnect between visual and auditory input because if a child can’t read faces, they may have more difficulty learning vocabulary," she says.

Still, Dumitriu says that there’s a lot they’re still evaluating and they’ll have to see how the research progresses. It also depends on when a baby was born during the pandemic. Towards the end, babies may have spent more time with their parents talking and reading, which both help to cultivate language, she says.

"What we might see in babies who were born during the first part of the pandemic when there was so much stress and insecurity might be very different from what we see towards the end of the pandemic," she says. "People have changed the way they work and a lot of parents are spending more time at home and more time with their children."

Dumitriu says that parents and caretakers can do a lot to cultivate language and it starts with ensuring that their baby is where he or she is supposed to be developmentally. She says that cooing, a precursor to speech, starts around four to six months and by nine months there should be consonant use with words like "ba-ba" and "mama" sounds.

And along the way, parents can help their babies to develop vocabulary, says Dumitriu.

Reading to your children multiple times daily, being around different people and speaking in more sophisticated adult language rather than monosyllabic "baby language" is important. If a child doesn’t understand what you’re saying, try and say it in a different way so they can.

"Babies learn by being around a lot of language. They need to listen to a lot of words and look at faces who are saying those words," she says.

On the other hand, experts contend that children don’t learn language from screen time unless parents are narrating the show along with their children. This is problematic considering that research shows screen time was up significantly during the pandemic, as parents tried to balance childcare with working from home.

If you’re concerned that your child isn’t meeting these verbal milestones, it’s important to talk to your pediatrician to find out for sure. But the good news is, babies are resilient and if they do fall behind, they can easily make up the difference.

"The brain is still very plastic and malleable and babies can absolutely catch up," says Dumitriu.

As far as my daughter is concerned, I’m happy to report that she seems to be doing just fine. She jabbers so much it’s hard to get a word in edgewise. Yesterday, after pulling her poor golden retriever’s tail, I even heard her whisper an apology.