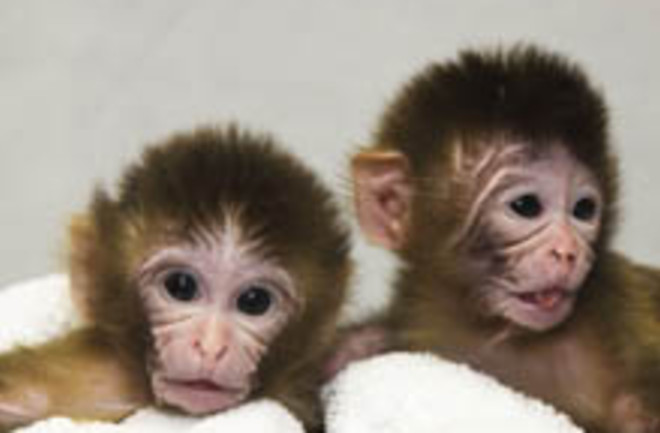 These cute little macaque monkeys may have gotten their fluffy brown fur from their father, their big eyes from their mother, and their good health from... their other mother. The scientific advance heralded in a new paper in Nature is essentially procedural: Researchers have figured out how to make an embryo that does not carry the mitochondrial DNA of its mother but that of another female instead, which could prevent diseases that are caused by inherited defects in this genetic material. But the study's immediate impact comes from the ethical questions it raises.

"With this you have potentially three genetic parents," said [bioethics expert] David Magnus.... "This will create the potential for legal and social conflicts." [Washington Post].

While more than 99 percent of an embryo's DNA comes from the union of a sperm cell with the nucleus inside a female egg, the other 1 percent is found in other structures outside the egg's nucleus--the mitochondria, the cellular power plants that produce chemical energy. This mitochondrial DNA is inherited only from the mother, but in the new study on rhesus macaques researchers monkeyed with that biological truism.

transferred DNA from the nucleus of one egg into another egg which had had its nucleus removed, without carrying over any mitochondrial DNA in the process — a crucial improvement on existing DNA-transfer techniques. The eggs were then fertilized with sperm and implanted into females, which produced offspring that had mitochondrial DNA from one female and nuclear DNA from another [Nature News].

“We consider it a big achievement.... Anything we study and achieve in non-human primates can be translated much more easily to humans” [The Times].

Defects in mitochondrial DNA can cause a host of disorders, including heart disease in children, blindness, muscle weakness, and movement disorders. Mitalipov says that women who suffer from any of these diseases should be given the chance to have healthy children by editing out their own faulty mitochondrial DNA. But first, researchers will have to overcome legal obstacles and ethical objections. To test the safety of the procedure in humans, embryos would have to be created solely for research purposes, and it's illegal to conduct such experiments with funding from the federal government. There's also a scarcity of women willing to donate their unfertilized eggs to science, as most states outlaw paying for these donations (New York recently became a notable exception).

If applied to people, the work would also alter a family's genes complement in a permanent way that would be passed down for generations, which would violate a long-standing taboo in altering the so-called "germline" because of the potential of unforeseen consequences [Washington Post].

Some experts even wonder if the women who give their healthy mitochondrial DNA could sue for visitation rights to the resultant child. In an editorial also published in Nature, the journal's editors write that the public has also rejected the idea of a three-parent union as "unnatural."

Yet similar concerns greeted in vitro fertilization when it was being pioneered in the 1970s, and the technique is now widely accepted. Blanket bans can impede progress and encourage unethical practices. With appropriate oversight, research into other reproductive technologies has the potential to give more couples the chance of having a healthy baby [Nature].