Saw this on Twitter, but I've talked to others who have brought up this issue: 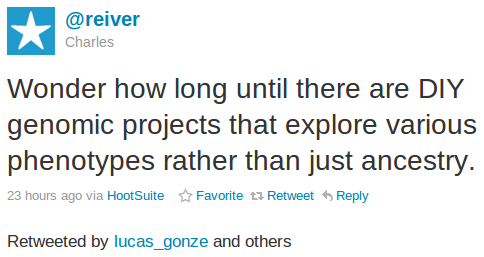 It seems the logistic issues are the big problem. How do you validate phenotype? Tight-knit communities could probably work just based on trust, but then how do you scale up the sample size to detect loci of small effect? I think it will come, but I'm not sure when. Though obviously when it comes to disease phenotypes there's going to be more motivation by interested parties. In the near future we'll have pretty cheap full sequences, so one could probe differences within families to pick out possible mutations which might account for the variance you see across siblings. But would people really want to know why they're smarter/stupider or better looking/uglier than their brother/sister? Isn't the reality enough?