During this modern coronavirus pandemic, our ancient instincts for avoiding disease may misfire. 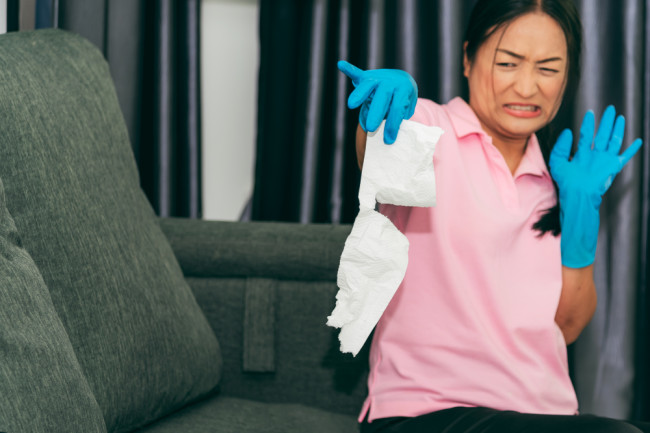 (Inside Science) — Imagine putting your hand in a pile of poop. It stinks and squishes. What do you do next?

Most likely, you'll scrub that hand with plenty of soap — and you don't need public health officials or a germ theory of disease to tell you that's the right thing to do. But when you touch the handrail on an escalator, it's much harder to remember that you could be picking up coronavirus germs.

Humans have instincts that have evolved over millions of years to steer them away from infectious diseases. In some ways, these psychological adaptations — collectively dubbed "the behavioral immune system" — are helping us fight the COVID-19 pandemic. In other ways, they're failing us. And some experts warn that if we're not careful, our pandemic-heightened instincts could turn us into more bigoted, less compassionate people.

Why We Feel Disgust

For most of human history, infectious diseases probably killed more people than anything else, said Joshua Ackerman, a social psychologist at the University of Michigan in Ann Arbor. The need to defeat viruses, bacteria and other parasites has shaped well-known elements of the immune system such as antibodies and white blood cells.

But the traditional immune system can only respond once a parasite is inside our bodies. By that time, the invader may already have caused damage, and to destroy it, the body must fight a messy and expensive war.

When possible, it's better to avoid catching a disease in the first place. So evolution has crafted a parallel immune system in our minds, and at its core is disgust. That "ew" feeling is part of what motivated our ancestors to avoid likely sources of infection such as feces, vomit and rotting food.

"We don't even need to visually detect these things. They're some of the most aversive smells that we can experience," said Joshua Tybur, an evolutionary psychologist at Vrije University Amsterdam.

While it's hard to know whether other species experience disgust the way we do, it seems clear that our behavioral immune system has origins older than humanity. Jane Goodall observed chimpanzees shunning other chimps that had polio. Bonobos, sheep, horses and kangaroos all avoid food that has feces on it. Caribbean spiny lobsters are normally highly social, but they avoid sharing dens with other lobsters that are sick.

In some ways, a person with no sense of disgust might face similar handicaps to someone who can't feel pain, said Tybur. There are conditions that make people unable to feel pain, and they often lead to serious health consequences as people accumulate injuries and infections.

"We often take for granted how kind of naturally and intuitively we move ourselves away from reliable pathogen risks even without thinking, 'Oh, there might be a pathogen in there,'" said Tybur.

Why Hand-Washing and Social Distancing Are Hard

Now, that ancient psychological system is confronting a modern threat: a pandemic that travels on airplanes and sweeps through cities that are home to millions. Governments are encouraging or mandating that people stay home, where there's less possibility of encountering the virus. When people do go out, they're supposed to avoid touching their faces, wash their hands frequently, and keep their distance from others. But people are struggling to comply.

Part of the problem may be that for most of human history, people lived in small hunter-gatherer bands of a few dozen people. Our ancestors would never have encountered things that thousands of people touched in the same day, said Tybur. We haven't yet evolved instincts that such things are dangerous, and without that disgust reflex, it's easy to forget.

The story is more complicated when it comes to direct contact with other people. Humans already have an instinct for social distancing, noted Tybur. For contrast, think of dogs.

"When they see another dog, they will often run over and go mouth-to-mouth contact, they'll go mouth-to-[rear] contact, with a complete stranger," said Tybur. "For humans that would be unthinkable."

Humans like to keep a buffer between themselves and others, and the size of that buffer depends on the relationship. Between sexual partners, it's essentially zero; with strangers, it is much larger. The more intimate a relationship, the more comfortable people are with things like hugging and drinking from the same glass.

According to frameworks developed by Tybur as well as Debra Lieberman and colleagues at the University of Miami in Florida, people's brains calibrate their levels of disgust based on the "social value" they place on another person. People subconsciously compute things like how much they want to have sex with someone, what kind of friendship and support that person can offer, and whether they are genetically related. At the same time, they evaluate how likely the person is to give them a disease.

For example, if you encounter a stranger who smells bad or has bloody sores on their face, you will probably feel some level of disgust, but that reaction will be tamped down if it's your own child. And you may be fine with sitting next to a stranger on the bus, but unless you found them extremely sexy, you'd likely recoil at the idea of sticking your tongue in their mouth.

Now, people are being told to increase the buffer between themselves and others past where they feel it should be, said Tybur. He speculates that greeting rituals such as hugs, handshakes and cheek kisses may have developed in part because they demonstrate how highly we value people.

"When we shake someone's hand or when we give someone a hug, we might be advertising to that person that they're important enough to us that we're willing to take that pathogen risk," he said.

If that's true, it's no wonder that social distancing is hard. Talk show hosts may mock alternative greeting practices like touching elbows or feet (behavior changes that, for many, have gone from seeming overly cautious to grossly inadequate in the past few weeks). But to Lieberman, it makes perfect sense why people would want to bump elbows. It's to signal how much they care.

"They're just grabbing for straws in order to kind of figure out 'how do I show people this value,'" she said.

So if our sense of disgust isn't doing what we need it to, can we deliberately manipulate it to help us through this crisis? Perhaps, said Lieberman — at least when it comes to hand-washing and disinfecting surfaces. A 2009 study found that when posters and educational videos about hand sanitation included disgusting images such as a poop sandwich, people were more likely to actually wash their hands.

In the last few weeks, news reports and public service announcements have been full of pictures that make the COVID-19 virus look "pretty," noted Lieberman. Icky images might make more of an impression. But, she warned, officials should be cautious about using disgust to encourage social distancing, as that would involve painting other people as disgusting.

"That's potentially dangerous because disgust has a nefarious relationship with morality," she said.

Many studies have shown links between the behavioral immune system and phenomena such as xenophobia, discrimination and willingness to trust others. For example, one study by Lene Aarøe at Aarhus University in Denmark found that people who are more sensitive to disgust tend to have lower levels of  "generalized social trust," a measure of how much you believe others will look out for your best interests and avoid deliberately harming you. People who have low social trust also tend to be less willing to do things, like recycling, that benefit society as a whole.

People who view disease-related images are less likely to support immigration, especially when the immigrants are from different races and cultures. Several studies have suggested that when people's behavioral immune systems are triggered by images or articles related to infectious disease, they become more biased against groups including the elderly, the obese, foreigners and the disabled.

Such effects are modest and not always consistent, and researchers interpret them in a variety of ways. Nevertheless, it's enough to convince some experts that manipulating disgust could be playing with fire.

Renata Schiavo, a senior lecturer at Columbia University Mailman School of Public Health in New York, doesn't support using disgust in any public health messaging, even to promote hand-washing. The research on disgust in public health campaigns has mostly focused on hand-washing after people use the bathroom or before eating, she noted. It's not clear what effect such methods would have in a pandemic, when people must wash their hands far more often and in other circumstances. And given that this crisis is already inspiring fear and bigotry, Schiavo views disgust as too dangerous a tool.

"This virus is not Chinese. It's not European. It's not American. But there have been a number of populations that are unfortunately experiencing an increase in discrimination," she said. "While I know the intentions of using disgust are good, I don't know if we know enough about how to [address] people's emotions and biases."

Even without deliberate interventions, the coronavirus crisis is probably ramping up our disease-avoidance instincts, said Anastasia Makhanova, a social psychologist at the University of Arkansas in Fayetteville. Much of Makhanova's research involves measuring how people's attitudes and bodies change when they read articles about disease threats, but that approach is impossible while the pandemic rages.

"Right now everyone is thinking about pathogen threats. So I can't engage in the experimental manipulation of how freaked out people are about getting sick," she said.

On the one hand, activating everyone's disease-avoidance instincts could help prevent the spread of the virus. Indeed, according to preliminary findings from data Makhanova gathered in the second week of March, people with stronger behavioral immune systems may be more likely to abide by recommendations for hand-washing and social distancing.

But we should also be aware that our heightened instincts could have harmful side effects, according to Aarøe, Makhanova and other experts. For example, those instincts could contribute to discrimination against people of Asian descent.

The instincts and biases our species has evolved don't mean we are doomed to behave badly, said Makhanova. People can correct for their biases if they are aware of them.

"[People] think that just because something's biological, it means we can't change it. But that's not true," she said. "We have a prefrontal cortex. We have self-control."