Disease Strikes in the Heart of Mississippi

Environment? Genetics? Why does heart disease strike so many more African-Americans? 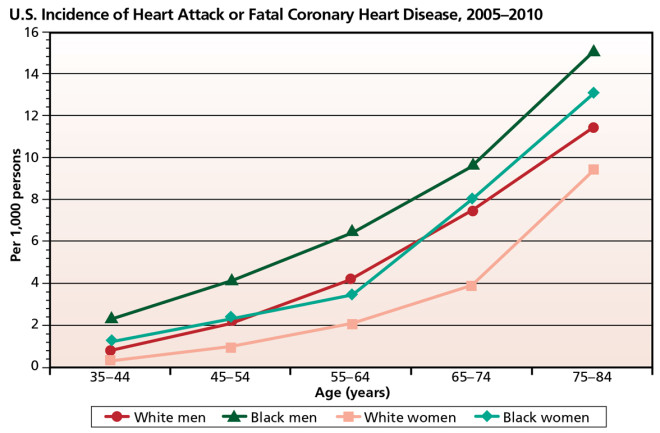 (Click to Enlarge) | Alison Mackey/Discover after Health Disease and Stroke Statistics – 2014 Update: A Report for the American Heart Association

When you hear that Mississippi is a red state, you think politics, but red also applies to the toll of its cardiovascular disease. Look at the Centers for Disease Control and Prevention’s map of the death rates from heart disease down to the county level across the U.S. Colors range from a healthy pale pink to deep red — those areas are the sickest. Mississippi is bathed almost entirely in crimson. Among Americans 35 and older, Mississippians have the highest mortality from heart disease in the nation, ranging between 450 and 850 deaths per 100,000.

By no coincidence, this state also has the greatest portion of African-American residents, close to 40 percent of the total population. Ervin Fox, a Harvard-trained cardiologist and epidemiologist, knows these statistics from multiple perspectives. Fox, 49, grew up in the Mississippi Delta region, where the soil is rich and cotton was king.

He treats patients at the University of Mississippi Medical Center (UMMC) in Jackson, and he also does research for the Jackson Heart Study, the African-American version of the older, more famous ongoing Framingham Heart Study. Since 1948, thanks to thousands of health histories collected from the mainly white residents of Framingham, Mass., epidemiologists have learned how blood pressure, smoking habits, cholesterol and a few other quantifiable factors can forecast heart disease and stroke, two general conditions comprising cardiovascular disease (CVD). The Jackson study, starting in 2000, was meant to determine if the same variables applied in the same way to black people.

The same factors do apply, says Fox, but the weighting of them is different, and the outcomes are worse.

African-Americans die disproportionately from CVD. If you are black, your risk of having a stroke is twice that of a white person, and your relative risk of dying from that stroke is even higher. Although life expectancy for both blacks and whites has improved in recent decades because of better awareness of CVD risk factors and better treatments, the gains have been greatest among whites — and black progress has slowed or stopped. It’s almost a truism in medicine that men have more heart disease than women. “Yet today,” Fox tells me, “CVD in black women is as high as in non-Hispanic white males. Deaths in African-American women exceed those of white males.”

He gives a grim chuckle. “It’s so bad it’s almost something to laugh at. Is it environmental, or genetic, or related to [public health] funding? The Jackson Heart Study was established to help answer these questions.”

(Click to Enlarge) | Alison Mackey/Discover after Health Disease and Stroke Statistics – 2014 Update: A Report for the American Heart Association

Environment vs. Genetics Some 5,300 people from Mississippi, who ranged in age from 21 to 84, signed up for the study, the largest enrollment ever of African-Americans in a research project. About 70 percent of the group is still being monitored 16 years later. Their health picture relative to whites’ starts to head south when they reach 45 or 50. “That’s the most productive time of life,” Fox observes, “and that’s when the disparity in blacks goes up to three times as high for cardiovascular events like heart attacks and strokes.”

Fox had named two biological actors, the environment and genetics, which oppose each other like feuding siblings yet often find themselves interacting. I ask the Jackson study director, Adolfo Correa, which one he thought was the more influential in creating the health disparity. Was it blacks’ and whites’ subtle genetic differences? Or were the social, environmental and behavioral factors of health — smoking, diet, access to care, psychological distress, racism — more powerful? Stress, too, makes patients’ blood pressure rise, at least temporarily, the Jackson studies have found.

“The answer to that,” says Correa, “depends on the objective. If you want to change the risk profile of people, you need to work on the environment. The one thing you can work on is the environment.” He went on to describe efforts to educate Mississippians in healthier living. “But also you need to understand the genetics.”

Correa points me to a gene known as APOL1. In Africa, those who have two specific variants of the gene gain some protection against sleeping sickness, which is caused by an environmental parasite. But APOL1 carriers living in the U.S. are more susceptible to CVD and chronic kidney disease. The finding stems from an analysis of 1,959 participants in the Jackson Heart Study.

While Mississippi has no sleeping sickness, it does have lifestyle factors leading to obesity, hypertension and diabetes, which damage the heart and kidneys. The Delta thus may host an unfavorable synergy between evolution-driven DNA and the 21st century environment. Similarly, carriers in the Jackson study of one copy of the genes that cause sickle-cell disease — a useful trait against malaria in Africa — appear to be more at risk for kidney disease.

Reading the Heart Overall, scientists have linked dozens of genes to cardiovascular conditions, but organizing the findings by race or ethnicity has barely started. Take, for example, a condition called cardiac hypertrophy, in which the left ventricle, one of the two major chambers of the heart, increases in size and thickness, usually in concert with weight gain and hypertension. Hypertrophy raises the risk of heart attacks and strokes, and it affects African-Americans more frequently than whites. But the relationships between the moving parts — race, blood pressure, obesity, enlarged heart mass and bad outcomes — haven’t been clear.

Fox’s specialty is to read echocardiograms, basically ultrasound movies of beating hearts. The sound waves pass through the muscle walls and provide a gauge of left ventricular mass (LVM). Some 5,300 Jackson study participants took two echocardiograms, eight years apart. In succeeding years, as the group on the whole put on weight and grew hypertensive, there came an unfortunate cascade of “events” such as heart attacks, heart failure, strokes, arterial blockage and chest pain. As lead author on a 2015 paper, Fox described the mathematical correlation between body mass index, blood pressure and ventricular mass during the initial phase of the study. Later in life, those who had shown the greatest change in their LVM were more likely to experience a cardiac event.

With LVM on the radar screen, investigators funded by the American Heart Association are looking at genes that control the growth of the heart. Normally the genes shut off in adulthood, but they appear to start up again in CVD patients. Investigators will check the stored samples of the Jackson population for a particular DNA pattern, then check for the pattern in the Framingham population as well. If the LVM growth mechanism for blacks isn’t the same as for Caucasians, this might be another window into the health disparity.

Although aging isn’t talked about much in cardiovascular research, age of course is an important risk factor for CVD. The initial Jackson cohort included many who were over 65, and that was 16 years ago. When does normal mortality, I ask Fox, interfere with studies of abnormal mortality? Shouldn’t the focus shift to the sons and daughters of participants, as in Framingham?

“People are living longer,” he replies. “It’s good to follow the disease in aging. But technology has changed, our awareness of risk factors has changed, medications have changed. Yes, it would be great to follow a young cohort, growing up in the current environment and strategies in medicine, and see how they do.” If funding from the National Institutes of Health is renewed in 2018, the Jackson Heart Study hopes to enlist another generation.

[This article originally appeared in print as "The Heart of Mississippi."]