Dining with an overweight person makes you eat more. 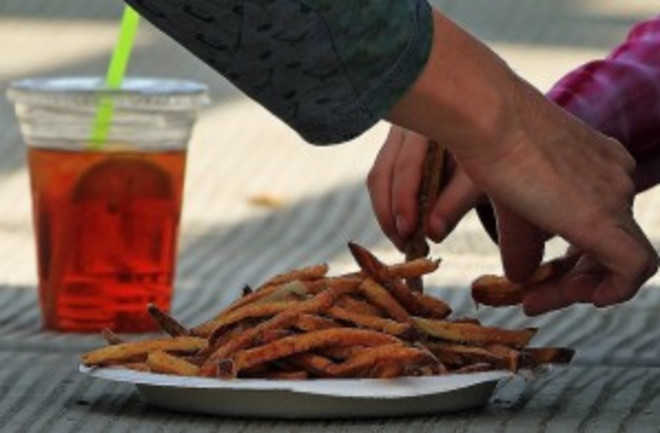 It's well known that you eat more in general when with other people. But how can the weight of your eating companions affect how much you eat? In this study, the researchers hired a professional actress to put on an overweight prosthesis (AKA a "fatsuit") and then serve herself some food in front of a group of study participants. They then had the participants serve themselves some food (pasta or salad). It turns out that when the actress took food while wearing the fatsuit , the participants served and ate more unhealthy food (pasta) than when she was "slimmer" (without the suit). Not only that, but when the "fat" actress served herself a large portion of salad, the participants ate less salad. The authors hypothesize that this effect is due to the subjects being less reminded of their health goals when they are around overweight people. Once again, going out to eat just got a little more complicated.

In good company. The effect of an eating companion's appearance on food intake "The purpose of this study was to examine whether or not the presence of an overweight eating companion influences healthy and unhealthy eating behavior, and to determine if the effect is moderated by how the companion serves himself or herself. A professional actress either wore an overweight prosthesis (i.e., “fatsuit”) or did not wear one, and served herself either healthily (i.e., a small amount of pasta and a large amount of salad) or unhealthily (i.e., a large amount of pasta and a small amount of salad) for lunch. After observing her, male and female participants were asked to serve themselves pasta and salad to eat. Results demonstrated that regardless of how the confederate served, participants served and ate a larger amount of pasta when she was wearing the prosthesis than when she was not. In addition, when the confederate served herself healthily, participants served and ate a smaller amount of salad when she was wearing the prosthesis than when she was not. Consistent with the “lower health commitment” hypothesis, these results demonstrated that people may eat larger portions of unhealthy food and smaller portions of healthy food when eating with an overweight person, probably because the health commitment goal is less activated. More generally, this study provides evidence that the body type of an eating companion, as well as whether she serves herself healthily or unhealthily, influences the quantity of food intake." Related content: Study proves drinking wine before a meal makes you eat 25% more.For some reason the “don’t chew your food” diet never really took off…Can overweight people blame their tastebuds?