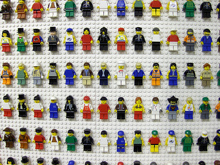 Soon, every single American will have a digital avatar—and we're not talking about Second Life characters. Researchers at Virginia Tech are building a nationwide computer simulation that will include 300 million synthetic individuals with true-to-life characteristics taken from U.S. Census data. The researchers say there are many uses for the simulation, from predicting the spread of infectious diseases to tracking fads and modeling traffic flow. The program, known as EpiSimdemics, already has 100 million simulated residents. Each resident is endowed with as many as 163 variables, including age, education, occupation, family size, and general health. Although each synthetic resident isn't meant to represent a specific real-life person, the information is taken from publicly available demographics data. The residents are mapped to real houses and real neighborhoods and assigned local schools, grocery stores, and shopping centers. The researchers hope to add more variables, including air travel using real-life flight data. One of the first uses will be to study the spread of infectious diseases like the flu. Since the program can model the movements of the residents and their interactions with each other, by seeding a few residents with a virus, the program will simulate how the virus spreads, even taking into account the progress of the disease in each person. But the researchers have bigger plans for their virtual reality nation: “The vision is for a Google-like interface, where you approach the system and ask it a question,” says researcher Christopher Barrett. “The framework is there, and now we’re pushing the system to larger and larger scales.” Related Content: DB: Since Sick People Surf the Web, Google Now Tracking Flu Trends DISCOVER: Brave New World, online fantasy worlds