Did your kid get a pea stuck up his nose? Science to the rescue! 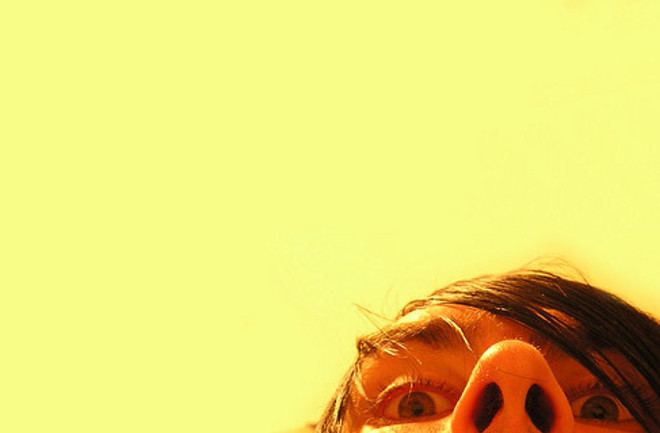 Before you go near your kid with a pair of tweezers, read this! Here, researchers combed the literature for examples of successful removal of peas and other objects from kids’ noses using a technique called the “mother’s kiss”. And, as this research shows, it really works! We’ll leave it to the authors to describe this DIY approach:

The mother’s kiss was first described in 1965 by Vladimir Ctibor, a general practitioner from New Jersey. The mother, or other trusted adult, places her mouth over the child’s open mouth, forming a firm seal as if about to perform mouth-to-mouth resuscitation. While occluding the unaffected nostril with a finger, the adult then blows until they feel the resistance caused by closure of the child’s glottis, at which point the adult gives a sharp exhalation to deliver a short puff of air into the child’s mouth. This puff of air passes through the nasopharynx, out through the unoccluded nostril and, if successful, results in the expulsion of the foreign body. The procedure is fully explained to the adult before starting, and the child is told that the parent will give him or her a “big kiss” so that minimal distress is caused to the child. The procedure can be repeated a number of times if not initially successful.

This sure sounds better than trying to suck out from the other end (meaning the nose).

Efficacy and safety of the “mother’s kiss” technique: a systematic review of case reports and case series.

“Background: Foreign bodies lodged in the nasal cavity are a common problem in children, and their removal can be challenging. The published studies relating to the “mother’s kiss” all take the form of case reports and case series. We sought to assess the efficacy and safety of this technique. Methods: We performed a comprehensive search of the Cochrane library, MEDLINE, CINAHL, Embase, AMED Complementary and Allied Medicine and the British Nursing Index for relevant articles. We restricted the results to only those studies involving humans. In addition, we checked the references of relevant studies to identify further possibly relevant studies. We also checked current controlled trials registers and the World Health Organization search portal. Our primary outcome measures were the successful extraction of the foreign object from the nasal cavity and any reported adverse effects. We assessed the included studies for factors that might predict the chance of success of the technique. We assessed the validity of each study using the Newcastle–Ottawa scale.

Results: Eight relevant published articles met our inclusion criteria. The overall success rate for all of the case series was 59.9% (91/152). No adverse effects were reported.

Interpretation: Evidence from case reports and case series suggests that the mother’s kiss technique is a useful and safe first-line option for the removal of foreign bodies from the nasal cavities of children.”