Despite Dangers, Millions of Americans Are Still Taking Daily Aspirin 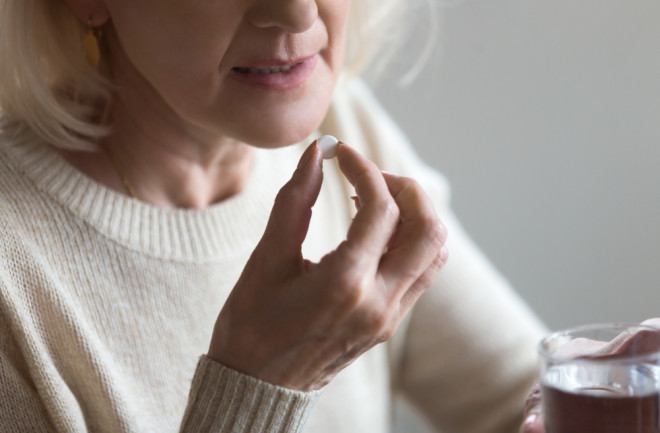 Many Americans have seen the television commercials from a leading Aspirin manufacturer saying their drug “can help prevent another heart attack.” The claims behind the commercials, which have been airing for decades, are based on research showing that taking low doses of Aspirin daily can prohibit the aggregation of platelets that can cause a heart attack.

But Aspirin isn’t totally benign. In 2018, new evidence surfaced that put the brakes on this common practice. Scientists who conducted three major clinical trials found that an Aspirin regimen was too dangerous for certain people, in particular because of the increased risk of bleeding in the elderly and patients with diabetes.

That’s why earlier this year, the American Heart Association and American College of Cardiology changed their official guidelines to recommend against a low-dose Aspirin regimen for people without cardiovascular disease that are at higher risk for bleeding. They also recommend people over 70, regardless of bleeding risk, don’t take it at all.

Researchers at Harvard Medical School were interested to see how prevalent this sort of low-dose Aspirin use already was in the general population. They were curious to see how many people who had not had a heart attack or stroke, or a history of cardiovascular disease, were taking Aspirin as a preventative measure. They used survey data from 2017 — before these new studies came out and the recommendations changed.

The scientists found that a quarter of adults over 40 — again, who don’t have cardiovascular disease — are taking Aspirin regularly for heart health. That’s about 29 million Americans. And nearly half of disease-free adults over 70 are doing the same.

About 9 million of these Aspirin-takers decided to do it on their own — without a recommendation from their doctor.

“I was frankly very surprised to find out how prevalent it was,” says Colin O’Brien, lead author of the study and a clinical fellow in medicine at Beth Israel Deaconess.

The researchers also looked at whether people who reported a history of gastric ulcer disease — who are known to be at higher bleeding risk — were any less likely to be taking Aspirin because of this increased danger. But they weren’t.

“[It’s a] red flag that there’s probably people out there that are at high bleeding risk that may need to come off Aspirin,” says O’Brien. “[They] should talk to their doctors about that.”

Overall, the authors encourage patients to ask their doctors, and doctors to ask their patients, about Aspirin use. Especially for those without a history of cardiovascular disease or stroke.

“We really want those people to be talking to their doctor to make sure that Aspirin is actually safe for their health,” O’Brien says.

These data will serve as a useful baseline for future research into how patients and health care providers respond to the new recommendations. “We’ll be curious to see if the prevalence of aspirin to prevent heart disease decreases in the future,” says O’Brien.

The study was published in July in the Annals of Internal Medicine.

More From Discover
Health
18 Best Creatine Supplements to Buy Right Now
Health
Is 'Expired' Milk Safe to Drink? Here's How to Know When to Throw Away Food
Health
Extreme Fatigue: 4 of the Longest-Lasting Sporting Events
Health
What Science Says About the Weight-Loss Potential of The One-Meal-a-Day Diet
Health
How Saliva Changes The Flavor Of Food
Health
Walking vs. Running Benefits: Should You Walk or Run for Exercise?
Recommendations From Our Store
My Science ShopDiscover STEM Kits
My Science ShopDiscover 2022 Calendar
My Science ShopStrange Science
My Science ShopElements Flashcards
Shop Now
Stay Curious
Join
Our List