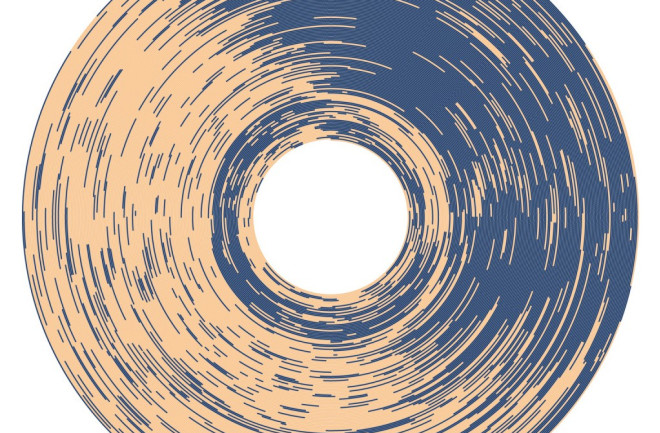 Andrew Elliot mapped his daughter's sleeping patterns for the first six months of her life. The circle is oriented like a 24-hour clock with midnight at the top. Each concentric circle represents a day, starting from day 1 in the center. Sleep, or inactivity, is blue and waking hours are tan. (Credit: Andrew Elliot) Life for a rookie parent can be utterly terrifying. For the first time they’re 100 percent responsible for another human being’s survival. One freshly minted dad, fully comprehending the gravity of the situation, left no stone unturned when it came to caring for his newborn daughter. In addition to feedings and diaper changes, Andrew Elliot, an industrial designer by day, recorded his daughter’s sleeping patterns to make sure all systems were normal. And after manually collecting six months of daily sleep data using the Baby Connect app, Elliot relied on his technical know-how to extract the numbers and compose a stunning visualization of his daughter’s sleeping habits in the opening days of her life. His graphic was a big hit on Reddit, but it’s also an excellent representation of what researchers know about sleep cycles early in life. "I was recording her sleeping times because as a first-time parent I thought I would do whatever it took to keep her alive (so far so good)," Elliot wrote (she's now two years old). "When you're a new, sleep-deprived parent, it's hard to notice changes in patterns like this, but the visualizations make it very clear."

What Are We Seeing?

Here’s how to interpret Elliot’s graphic: The circle is oriented like a 24-hour clock with midnight at the top, center. Each concentric circle represents a day, starting from day 1 in the middle. Sleep, or inactivity, is blue, and waking hours are tan. “What we can see in the graphic is very typical of early infant sleep,” Katharine Simon, a doctoral student working in the University of Arizona’s Sleep Research Lab, wrote in an email to Discover. Indeed, if there’s one thing newborns love to do, it’s sleep. Simon says newborn infants will sleep roughly 18 hours a day in multiple bouts, which is called polyphasic sleep. As the child grows, these bouts of sleep occur less frequently but in longer intervals, and by toddlerhood they’ll be content with one nap during the day and extended sleep at night—called biphasic sleep. “Soon after birth, you can see the infant is sleeping the majority of the day in multiple bouts. As she gets older, you can see that she is reducing the total amount of sleep, and her sleep is consolidating,” Simon writes.

But check out that first month or so in the middle of the graphic. Her sleep patterns are flipped; they’re all over the map. That’s because her circadian clock—the 24-hour waking and sleeping cycle—is still immature. In fact, until a child is older than four months, their bodies are unable to regulate their sleeping patterns, Simon says. It’s a fact Elliot learned the hard way. It's a biological phenomenon every parent must come to grips with. “I especially like the flip in the early months where she mostly slept through the day and (was) awake at night,” Elliot wrote. “It was terrible going through that stage. I didn't know whether my mind was over-exaggerating it, but when seeing it here it is clear.” For Elliot, the his daughter's early days at home were especially challenging. She suffered from acid reflux when was really young, which meant she could not lie on her back when sleeping. Elliot and his wife took turns holding her upright on their chest to let her sleep. Therefore, she got most of her rest during the day while they were awake.

"We were prescribed some medication to give her for the reflux and this started to clear it up within a few days and that is where her sleeping patterns suddenly settled out into a more logical and consistent pattern," he says.

Philippe Mourrain, an associate professor at Stanford University, is hesitant to draw many conclusions from an amateur project with a sample size of one, but he says it is certainly aesthetic representation of an infant learning to march to an internal drumbeat. “In the first days the rest/activity cycle is not organized well and you can notice fragmented or ultradian rhythms,” Morrain wrote in an email to Discover. “It shows quite well how difficult it is for us parents with a strong circadian and sleep wake cycle to match our babies’ rhythms.” If you’re interested, Elliot described in detail

how he pulled the data from the app and gave it an artistic spin. He plans on cutting the graphic into a piece of wood and using it as the face of actual clock that will hang in his daughter’s room — a charming reminder of the wrench she threw into her parents’ circadian cycle from day one.