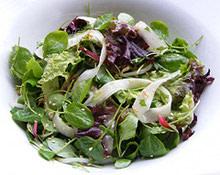 There is growing interest in the potential benefits of calorie restricted diets, after research in animals suggested they might be able to improve lifespan and delay the onset of age-related disease. However, it is still not certain whether this would be the case in humans - and the the levels of "caloric restriction" involved are severe [BBC News].

The study involved 50 elderly people who ranged from normal weight to overweight. Members of one group were asked to cut their daily calorie consumption by 30 percent, primarily by reducing their portions, another group kept their calorie intake the same but ate more of the healthy, unsaturated fats found in fish and olive oil, while a final group made no dietary changes. When the volunteers took memory tests after three months, only the calorie-restriction group showed improvement. Neuroscientist Mark Mattson comments that the study

"adds to considerable evidence from animal and human studies that high calorie intake is not only bad for your heart, but it's bad for your brain" [Technology Review].

As researchers report in the Proceedings of the National Academy of Sciences [subscription required], the subjects also showed reduced insulin levels, and reduced levels of a protein that's tied to inflammation.

In fact, the rise in cognitive test scores correlated with lower insulin levels. In animal studies, high insulin levels and low-grade inflammation--products of being overweight and of high calorie intake--have been shown to hamper cognitive function [Technology Review].

It's not entirely clear how low insulin levels improve memory, but metabolic researcher Ken Fujioka (who wasn't involved with the current study) has a evolutionary hypothesis for why the mechanism is in place.

"Insulin is a messenger to the brain of carbohydrate reserves, and as we restrict calories, we will drop the insulin and signal to the brain we will be going into 'starvation.' It would be adaptive to have better verbal memory to find food or calories in order to survive" [ABC News]

, he says. Some experts question whether the volunteers were faithfully following their diets, since the researchers monitored the volunteers only through questionnaires. Physiologist Andrzej Bartke

notes that although participants on a reduced-calorie diet lost weight, he might have expected them to lose a little more on such a strict regimen. "Most people would not stick to 30% below what they normally eat," he says. "That's pretty severe. People get hungry." If some participants broke the rules, however, it suggests that less-draconian measures might also be effective, he says. "It doesn't take very much weight loss to get, in some regard, significantly healthier," says Bartke [Nature News].