Gene editing leaps to the next level with the injection of a CRISPR complex directly into a patient's eye to combat a form of hereditary blindness. 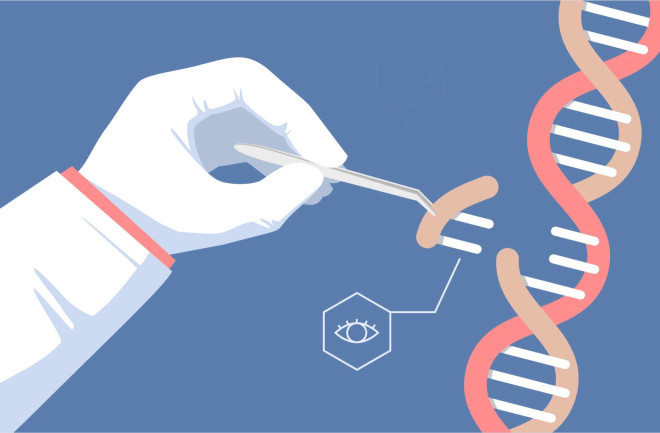 This article appeared in Discover’s annual state of science issue as “CRISPR Gets Under the Skin.” Support our science journalism by becoming a subscriber.

For the first time, scientists have injected the CRISPR-Cas9 gene-editing tool into a human patient as part of a clinical trial. It marks another milestone for human gene editing, and a step toward bringing gene therapies to wider patient populations.

The pharmaceutical companies Allergan and Editas Medicine partnered with Oregon Health & Science University for the trial, named BRILLIANCE, which aims to treat a form of congenital eye disease known as LCA10. In the trial, scientists are injecting instructions for the CRISPR gene editor, encapsulated in the shell of a deactivated virus, into patients’ eyes. There, if all goes well, the tool will cut out a problematic gene and restore their vision.

Though CRISPR has been used in the past to treat patients, those trials involved taking cells out of the body, editing them in the lab and then putting them back into people. This new work is the first time CRISPR-Cas9 has been injected directly into the patient. Still, it’s not the first time a gene editor has been put to work inside a human — that distinction goes to another gene-editing tool called a zinc finger nuclease, which was tested in 2017 in a man with Hunter syndrome, an inherited genetic disorder.

But this 2020 clinical trial is a landmark for CRISPR-Cas9, which has revolutionized gene-editing research since its discovery in 2012.

“We really feel that this is a technology that can make a huge difference in the world and in many patients,” says Mark Pennesi, an associate professor of ophthalmology at OHSU’s Casey Eye Institute and a principal investigator for the study. The trial is sure to draw close scrutiny from the pharmaceutical industry, government regulators and other scientists. But Pennesi hopes, if successful, it could pave the way for future studies using CRISPR in the body to treat a wide range of diseases.

There are many rare diseases, like LCA10, that are caused by a mutation to a single gene. Gene editors are prime options for curing these diseases, which range from sickle cell anemia to Huntington’s disease and hundreds of other severe conditions.

In the case of LCA10, mutations to a gene known as CEP290 act as a kind of stop sign, halting production of a protein necessary for photoreceptors in the eye to function. The result is that patients with the disease are often legally blind by the time they reach adulthood.

The CRISPR treatment will cut out the mutated stop sign gene and allow the body to begin making the crucial photoreceptor protein. Whether this process works to repair the damage LCA10 causes is one facet of the trial; another is whether the procedure will be safe.

CRISPR gene editors carry the risk of what are called off-target effects, which occur when the tool mistakenly cuts a gene it’s not supposed to. New and better versions of the tool have reduced the rate of such mistakes, but they remain a concern. Still, says David Segal, a geneticist at the Genome Center at the University of California, Davis, who is not involved with the research, preliminary results from the trial are promising, and he thinks the treatment could hold real benefits for patients.

“It’s really exciting to see things get to this level,” Segal says.