Coughs of Many Colors: When Should You Be Worried About Phlegm?

Disgusting though they may be, phlegm and mucus are nothing to sneeze at. Here’s what their appearance can tell you about your health. 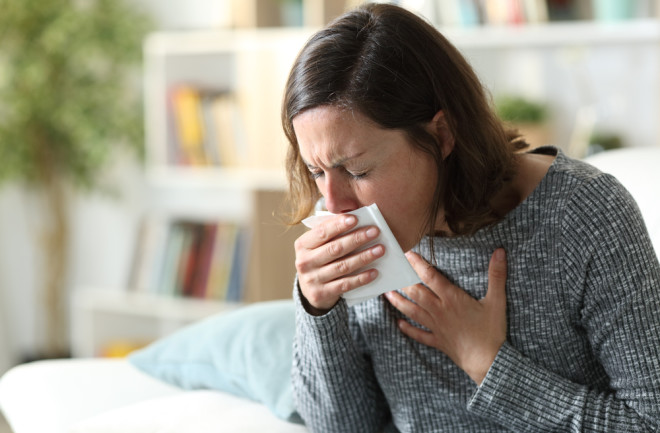 Admit it: After you blow your nose or aggressively clear your throat, you might steal a glimpse at what your body just discharged — maybe not every time, but every once in a while. Just a quick peek. There’s nothing weird about that. You’re simply checking that everything looks right. At a time of year (and an era in history) when people are particularly concerned about respiratory health, it only makes sense to occasionally inspect your output, as it were, to be sure things are working normally.

But when it comes to mucus, what is normal? Would you recognize warning signs even if you saw them? Can the color and consistency of that stuff actually tell you anything useful about your health?

Does this seem like an undignified topic for a respectable science website? What can we say, except: it’s not.

Before we tackle the question of color, let’s define just what sort of goo we’re talking about. The terms phlegm, mucus and sputum are used interchangeably by many laymen, yet they describe three distinct but related — and disgusting — bodily phenomena. Mucus is a thin, slick secretion produced by the mucous (with an “o”) membranes — a colorless, watery gel composed of salts, enzymes, antibodies, and other proteins in a viscous suspension. Mucus occurs throughout the body and functions primarily as a lubricant; it is found most abundantly in the digestive tract, a slippery coating that eases the passage of food down the esophagus, protects the lining of the stomach, and helps waste move through the intestines. Mucus also protects and lubricates the eyes and the respiratory system.

Phlegm is a specialized term for mucus that occurs specifically in the lower respiratory tract — that is, the lungs and throat. (Mucus produced in the nose is still just mucus.) Respiratory mucus serves to lubricate the vocal folds, and also filters out particulate debris like pollen, dander and smoke. When you inhale something nasty, it gets stuck in the phlegm coating your throat or lungs, triggering the cough or throat-clearing mechanism to expel it. Phlegm discharged by coughing or spitting is called sputum.

Now that You Bring It Up...

Ordinarily, your body produces about a quart of phlegm — which, if you’re healthy, is colorless — each day. That’s how much you need to keep your airway clean and well-lubricated. But if you have an infection or inflammation in your respiratory tract, your body increases its production of both phlegm and nasal mucus. Copious amounts of clear, thin phlegm usually indicate an allergic reaction; the extra volume indicates that your body is trying to flush out the pathogen, and can show up as postnasal drip or a wet cough. In some cases of viral pneumonia, too, the characteristic dry cough may give way to clear phlegm as the infection lingers and your body produces a mucus layer to soothe and protect irritated lung tissue.

Some chronic conditions, such as acid reflux (formally, gastroesophageal reflux disease, or GERD) or chronic obstructive pulmonary disease (COPD), are characterized by persistent white phlegm. Asthmatics, too, might see white phlegm when a flare-up occurs. For most people, white or light gray phlegm, especially when accompanied by nasal congestion, typically signals the onset of viral bronchitis. The color indicates the presence of infection-fighting white blood cells, and phlegm and nasal mucus will be thicker than usual.

As viral bronchitis settles in, it often brings with it a secondary bacterial infection — and a change in the color of your phlegm from white to a darker yellow. The color is caused by an enzymatic reaction as specialized white blood cells called neutrophils attack the infection. Sinusitis can also bring in yellow phlegm, which will take on a darker green cast as the infection lingers.

Phlegm tinged with pink or red indicates the presence of blood. It’s a classic sign of tuberculosis; the bloody handkerchief was a staple of many a Victorian novel when the disease was more common. Frothy pink sputum accompanied by shortness of breath is a sign of pulmonary edema; blood and fluid leak from the alveoli into the lungs. This is often a symptom of congestive heart failure, and should be checked out by a doctor as soon as possible.

A brown hue means blood in the phlegm, too — old blood, rather than fresh. This shows up in people suffering from various forms of pulmonary fibrosis, a family of chronic, incurable diseases caused by inhalation of microscopic particles which cause scarring in lung tissue. These conditions are an occupational hazard for miners; “black lung” is the most infamous. Heavy smokers will also sometimes cough up brown phlegm; the color in this case comes from tar residue.

Black phlegm, though uncommon, is most often caused by environmental factors — smog, coal smoke, or heavy smoking. A fungal infection, Exophiala dermatitidis, can also cause black phlegm. This is thankfully quite rare, and generally occurs in people with an underlying chronic condition, typically cystic fibrosis.

Through Thick and Thin

More so than its color, it’s the consistency of phlegm that makes cold-and-flu season such a misery. Although it’s swollen nasal tissues, not mucus, that gives your nose that stuffed-up feeling, the gunk in your nose and throat does get thicker during the winter, largely due to dehydration; you may be drinking the same amount of water, but the air gets drier, so you’re losing moisture through respiration. It’s a good idea to boost your fluid intake when the cold weather rolls around. A home humidifier will help, too.

And now that you know what you’re looking for, don’t be ashamed to peek — discreetly, of course.

More From Discover
Health
How Saliva Changes The Flavor Of Food
Mind
Gut Bacteria's Role in Anxiety and Depression: It’s Not Just In Your Head
The Sciences
This 2,300-Year-Old Mummy Has a Heart (and Tongue) of Gold
Mind
Can Playing Video Games Make You Smarter?
Health
Is Vitamin C Actually an Effective Cold Remedy?
Health
Why Walking Might Be One of the Best Exercises For Health
Recommendations From Our Store
My Science ShopDiscover STEM Kits
My Science ShopDiscover 2022 Calendar
My Science ShopStrange Science
My Science ShopElements Flashcards
Shop Now
Stay Curious
Join
Our List