Cool: Coughing Is Linked to Perception of Temperature in the Brain 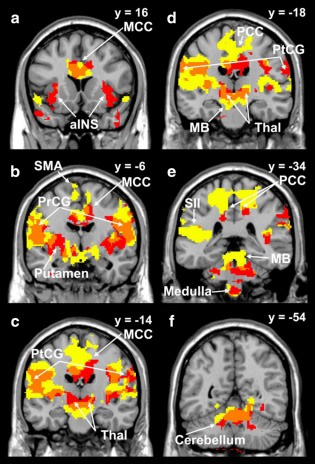 Coughing in the brain

For something so mundane, we know surprisingly little about coughing. Most of us just cough when we're sick, but patients with habit and psychogenic coughs don't seem to have any sort of physical trigger. Recent cough research, highlighted in a feature at ScienceNews

, suggests that the neural circuitry of coughing also involves temperature perception and higher brain areas. The same cellular receptors that sense temperature and pain also control coughing. The cool relief of a cough drop is no coincidence, as the menthol receptor both suppresses coughs and produces the cool feeling in your throat. There's a molecular on-switch for coughing, too: a receptor called TRPV1

. Unfortunately for researchers looking for a cough cure, inactivating TRPV1 also makes it dangerously difficult to feel heat. Mundane tasks like eating a hot meal or running a bath become hazardous if you don't reflexively shrink away from scalding heat. Other scientists are looking inside the brain, studying whether habitual and psychogenic coughs are the result of some suppression mechanism gone haywire. Stuart Mazzone has been putting people in fMRI machines along with a capsule of capsaicin to eat. Since capsaicin is the molecule that makes chilis fiery, it's not so surprising that it also causes coughs. As Mazzone puts it, your throat is constantly irritated when you're sick, but you aren't coughing the entire time. That means you have some ability to voluntarily control coughs. And, as ScienceNews reports, brain activity patterns seem to agree:

It wasn’t just the brain stem that lit up during a cough, or during an urge to cough, but regions in higher parts of the brain. Other parts of the brain, such as portions of the insular cortex (an area that has a large role in depression), were more active when trying to hold back a cough. “What we’re just starting to do now is study people with chronic cough,” says Mazzone. Volunteers with persistent coughing are being looked at with MRIs taken as they are asked to keep from coughing. They appear to show much less activity in the parts of the cortex that appear important in cough suppression.

Mazzone hopes that studying the neural circuity for coughing will eventually lead to new therapies. Fuzzy fMRI images are still a long way off from a cure, but scientists working on it.