Congratulations! You've Given Birth to Your Grandchild 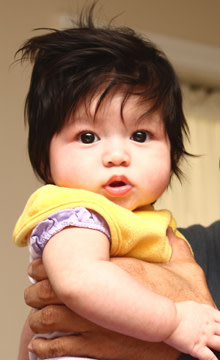 Science: It sure can make those family relationships confusing. A 61-year-old Japanese woman has given birth in Japan, which is extraordinary enough given her age. But this was no normal birth—the baby was her own grandchild. The Nagano hospital says the woman served as a surrogate mother for her own daughter, who does not have a uterus. News reports are saying that the baby was born last year, despite the fact that the hospital didn't announce it until today. That delay could have a lot to do with the attitude toward in vitro fertilization and surrogate births in Japan. They're legal, but most hospitals and clinics won't do them because the Japan Society of Obstetrics and Gynecology has banned its members from using the procedure. However, the doctor who runs the Nagano clinic in this case was booted from that organization a decade ago for providing in vitro fertilization for unmarried couples. The hospital has not even divulged the baby's sex, but says the birth went off without a hitch. Now all they have to do is figure out whose mother belongs to whom. Image: iStockphoto