If you’re struggling with achy joints or insomnia this winter, you aren’t alone. 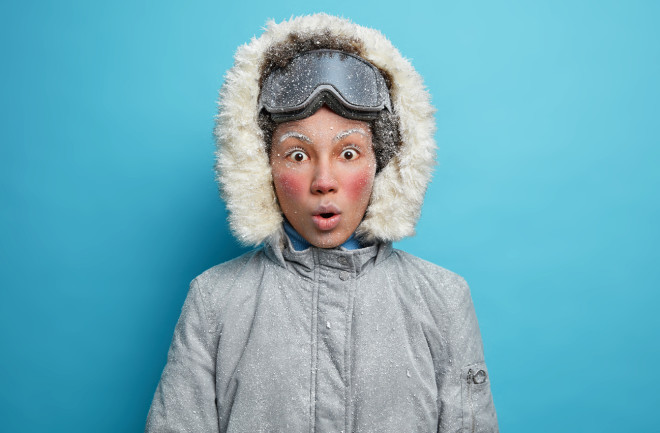 Whether you’re a beach bum or an ice queen like Elsa, most of us must deal with a drop in temperature during the winter season. On the outside, you prepare for those frosty mornings by bundling up. And on the inside, your body is adjusting in its own way — for better or worse.

For 4 to 6 percent of people, for example, colder weather means a case of the “winter blues.” Seasonal affective disorder (SAD) is a condition that often occurs in late fall and winter when a lack of sunlight triggers severe depressive symptoms. While the exact cause is unclear, some research suggests low vitamin D levels, a vitamin we get from sunlight, is linked to an increased risk.

But SAD is just the tip of the iceberg. From responding to changes in hormones to attempting to preserve body heat, here’s a glimpse at what’s going on inside your body during the winter.

The upper airways narrow during cold temperatures because your body is trying to get warm, explains Shruti Gohil, an assistant professor of infectious diseases at the University of California, Irvine School of Medicine. To avoid losing heat, your body constricts the blood vessels to any surface areas interacting with the cold environment, like the lungs.

Additionally, most sudden drops in temperature are accompanied by low relative humidity, meaning there’s less moisture in the air. Breathing in that dry air can further narrow your upper airways — causing coughing, wheezing and shortness of breath. Another downside? This constriction makes it harder for white blood cells to travel to different body parts and fight off invading pathogens.

Speaking of fighting off pathogens, dry air can also alter the ability of cells in the mucus lining of your airways to create an effective immune response against respiratory viruses. When there’s low moisture in the air, viruses have a higher chance of landing on airway receptor sites — making you more prone to getting sick.

“One reason we have seasonal viral infections is that the lower the temperature, the more robust it can be in the environment,” Gohil says. There’s some evidence linking low temperature to increased transmission of the coronavirus, though she says it’s too early to suggest that all airborne viruses spread more easily in colder temperatures: “It’s [also] possible you see it in cold because you’re probably indoors more and in contact with your household.”

These are some of the reasons why cold, dry air may worsen the health of people with preexisting lung conditions such as pneumonia and chronic obstructive pulmonary disease (COPD). In chilly temperatures, consider limiting your time outdoors; if you do need to venture outside, wear a scarf or mask for protection.

James Suchy, a sports medicine specialist at the Hoag Orthopedic Institute in Southern California, has come across patients who report pain during changing weather — but he says there’s still much debate on whether the cold actually contributes to muscle and joint pain.

“A lot of the research has been relatively inconclusive or had a small sample size of patients. There have also been differences in how the data is collected and debate on whether it’s a reliable way to gather information,” Suchy explains. Because most studies are correlational and cold weather is a difficult (if not impossible) variable to control, there’s always the possibility of something influencing the results.

For one, weather changes can sway how active a subject might be. “If it’s sunny, you’ll probably want to go outside and keep active, which keeps joints moving and, in turn, helps reduce stiffness and discomfort,” Suchy says. “But if it rains, you might feel less motivated to exercise and instead stay indoors.”

Of course, more research is needed to confirm this relationship, though there’s been some evidence that older adults diagnosed with arthritis and chronic pain may experience more pain with changing temperatures. Additionally, another study from 2017 found that people who frequently worked outdoors had a greater risk of developing rheumatoid arthritis when working in a cold environment.

“There isn’t any adequate explanation as to why joints hurt, but if there is, some speculate that it’s because cold weather may expose more nerve receptors sensitive to pressure fluctuations and may cause the enclosed joint space to expand or contract through exposed holes within the cartilage,” Suchy says. “Temperature changes might also change the stiffness and laxity of tendons and ligaments.”

Humans, like flowers, thrive in sunlight; just a few minutes in the sun cause our brains to release serotonin, the hormone involved in regulating emotion. But as the days turn darker, the shift to less sunlight signals a shift in our mood. With less serotonin, we may experience more anxiety, depression and a lack of energy.

Darker days also throw off your melatonin levels, explains Naomi Torres-Mackie, head of research at the Mental Health Coalition and a clinical psychology postdoctoral fellow at Lenox Hill Hospital. Known as the sleep hormone, melatonin is made by the pineal gland as a cue to tell your body it’s time to go to sleep. Levels of the hormone are suppressed when you’re exposed to sunlight and naturally increase again at nightfall. But during longer winter nights, the body produces more melatonin — making you feel sleepier throughout the day and making it harder to fall asleep at bedtime.

Cold weather has an indirect effect on our mental health as well, as we spend more of our time indoors. Torres-Mackie says that when it’s too cold to stay outside, it becomes more difficult to engage in things that are beneficial for your mental health, such as physical activity and socialization with others outside your household.

Now, this doesn’t mean winter is all gloom and doom. Torres-Mackie is one of many who enjoy winter, and more importantly, the snowfall. She says playing in snow can increase the mental well-being of adults because it encourages playfulness and tends to reignite good memories of the season.

"When you think of a snow day, you probably think of school being canceled, being home, hot cocoa, snowball fights, sledding, building snowmen and other childhood experiences," she says, adding that snow days may also aid in building social connections, since they remind us of doing these things with friends and family.