Projects like Outbreaks Near Me, Eterna and the COVID-19 Citizen Science Project have made great strides toward learning about COVID-19’s spread and how best to fight it. 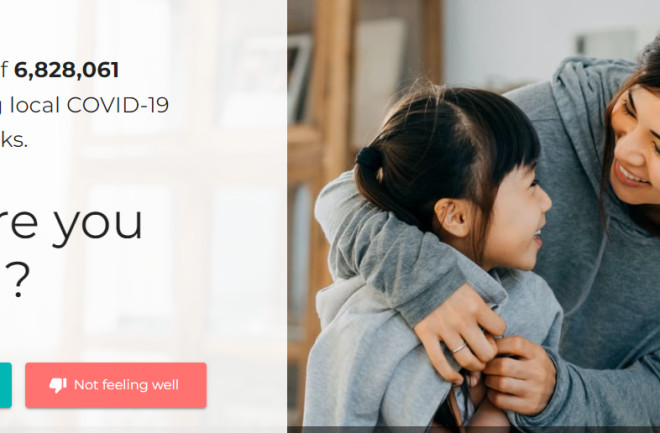 (Credit: Outbreaks Near You)

Scientists have done a ton to fight this pandemic. And they haven’t been working alone: They’ve had helpers. Some scientists have even had the privilege of having thousands of helpers. Citizen scientists faithfully logging their health status, answering surveys and playing games that help researchers learn more about everything from public health to how mRNA works. Here’s a run-down of citizen science projects helping to fight COVID-19, and what they’ve already accomplished.

It only takes a few seconds on the Outbreaks Near Me website to report whether you’re feeling healthy or sick. Even that simple question gives researchers a surprising amount of information on COVID-19’s spread. The data they’re collecting from volunteers across North America is already being used by a wide variety of health departments, researchers, and even the CDC.

Outbreaks Near Me evolved from two separate, related, projects: Flu Near You and COVID Near You. It officially launched in December 2020, and added a new reporting feature earlier this year where participants can report results from their at-home COVID-19 tests — data often missing from official case counts.

“We’re really excited about the home testing data we’re collecting,” says Autumn Gertz, project manager for Outbreaks Near Me. “That data is not really being widely collected elsewhere.”

So far, Gertz says, they have 35,000 data points from people reporting their at-home test results. Unlike the information tracked at official testing sites, which is reported to health authorities, the results of at-home tests aren’t typically reported. But with reports to Outbreaks Near Me, experts can see how many people are testing at home, how many are testing positive, and whether they’re getting follow-up tests. (For the latter, it seems the answer is generally: They aren’t.)

Take part: Outbreaks Near Me

Gertz hopes that Flu Near You’s citizen scientists will make the switch over to the new Outbreaks Near Me iteration. “It’s the next generation of the project, it’s just newer and improved,” she says.

Take an at-home COVID test lately? Report your results to Outbreaks Near Me!

In Eterna, players solve puzzles in an online game to help researchers study RNA, which turns genetic instructions from DNA into proteins to carry out tasks throughout the cell. RNA has gotten a big profile boost lately as the foundation for a few leading COVID-19 vaccines. Both the Pfizer-BioNTech and Moderna vaccines are based on messenger RNA, or mRNA.

Eterna’s latest mission let players take an active role in COVID-19 vaccine research. Their OpenVaccine project studied how RNA molecules fold, which affects how quickly they degrade. Designing RNA that doesn’t degrade as quickly at room temperature could dramatically improve vaccine availability worldwide. Current vaccines require extreme refrigeration to keep the mRNA functional, which has limited their use in areas that don’t have the infrastructure in place to distribute and store vaccines at such cold temps.

You don’t need any biochemistry knowledge to play Eterna: There’s a tutorial that walks you through 30 puzzles that will get you up and running.

“There’s a little bit of effort that goes into learning the basics, but I think it’s well worth the time,” says Townley. “It’s such a rare opportunity to design an RNA and have it synthesized in a laboratory.”

More recently, they’ve started expanding beyond Stanford, releasing new molecule designs publicly for other researchers to test in their labs.

“Any researcher anywhere in the world is free to test these in their lab and see how well these sequences hold up at room temperature or under refrigeration compared to the current vaccine sequences,” says Townley. “We felt it was important to get the sequences into the hands of multiple labs for testing, including pharmaceutical companies.”

The Eterna team has put out three papers based on their work so far. In the first, shared as a pre-print (that is, not yet peer-reviewed and published) in March 2021, they describe how the designs from Eterna players demonstrated that what they called “superfolder” mRNAs improved not only stability (how long the molecules last before degrading) but also their expression (how well they work).

In the second paper, published in Nucleic Acids Research in October 2021, they presented a new model for estimating how fast an RNA molecule will degrade based on its structure. And in their latest paper, a pre-print posted in October 2021, the team adds machine learning to the mix. Their new algorithm can look at a molecule’s sequence (like the ones developed by Eterna players) and figure out how it would fold in three dimensions.

This knowledge, put to good use, would change how mRNA vaccines are designed in the future, greatly improving their shelf life and accessibility worldwide.

The OpenVaccine project has concluded, but their next endeavor is already underway. Called OpenRibosome, it’s looking at components made up of RNA that are inside cellular machinery called ribosomes. Ribosomes are where genetic information gets translated into proteins.

We’ve only scratched the surface of the ways citizen scientists have helped with COVID-19 research. In Foldit, for instance, contributors solve protein-folding puzzles (much like Eterna’s RNA-folding puzzles). Players can take on their Coronavirus Challenge and design an antiviral protein that interferes with a COVID-19 infection. The best designs are manufactured and tested by scientists at the University of Washington Institute for Protein Design.

And in The COVID-19 Citizen Science Project, more than 100,000 people from all over the world have been reporting their health status and answering short surveys about their behaviors during the pandemic.

Greg Marcus, professor of medicine at the University of California, San Francisco and a co-leader of the project, says they’ve already learned a lot since the project launched in March 2020, and published multiple papers.

Some of the things they’ve looked at have included vaccine side effects, risk factors for infection or viral symptom development, as well as racial disparities in access to COVID tests, Marcus says. For instance, from March 2020 to October 2020, before vaccines were readily available, the greatest risk factors for contracting COVID-19 were visiting restaurants, attending large gatherings and the number of non-household contacts. The likelihood of developing symptoms from COVID-19 infections increased for people who had high blood pressure, smoked cigarettes or had anemia.

This invaluable data is possible thanks to citizen scientists like you who have volunteered their time and shared information with researchers to give them brand new insights. So here’s to you, citizen scientists — thanks for helping researchers learn about COVID-19 and bring us that much closer to beating the pandemic!