No, this isn't about intellectual property issues and piracy. Whole Genome Distribution and Ethnic Differentiation of Copy Number Variation in Caucasian and Asian Populations:

Although copy number variation (CNV) has recently received much attention as a form of structure variation within the human genome, knowledge is still inadequate on fundamental CNV characteristics such as occurrence rate, genomic distribution and ethnic differentiation. In the present study, we used the Affymetrix GeneChip® Mapping 500K Array to discover and characterize CNVs in the human genome and to study ethnic differences of CNVs between Caucasians and Asians. Three thousand and nineteen CNVs, including 2381 CNVs in autosomes and 638 CNVs in X chromosome, from 985 Caucasian and 692 Asian individuals were identified, with a mean length of 296 kb. Among these CNVs, 190 had frequencies greater than 1% in at least one ethnic group, and 109 showed significant ethnic differences in frequencies (p<0.01). After merging overlapping CNVs, 1135 copy number variation regions (CNVRs), covering approximately 439 Mb (14.3%) of the human genome, were obtained. Our findings of ethnic differentiation of CNVs, along with the newly constructed CNV genomic map, extend our knowledge on the structural variation in the human genome and may furnish a basis for understanding the genomic differentiation of complex traits across ethnic groups.

Here's a figure which shows the distributions, CHI = Chinese and CAU = Caucasion.* 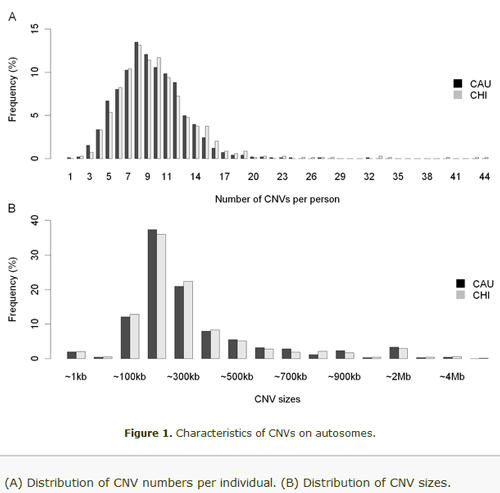 The big picture issue is CNVs may be important in gene expression, the paper cites a number that ~18% of the variance in this may be due to CNVs. An interesting recent case was CNV differences in regards to the gene which codes for amylase, with some researchers suggesting this is due to selection for the ability to digest starches for agriculturalists. In relation to the title, there might not be anything there:

A third example of ethnic variation is that the genomic coverage of CNVs in Asians is 1.6-fold higher than that in seen in Caucasians, indicating that genome variants were more common in Asians than in Caucasians. Further sensitivity analysis resulted in an only 1.2-fold elevated genomic coverage of Chinese CNVs compared to Caucasian CNVs. Considering different DNA extraction methods for Chinese and Caucasian samples, the ethnic differences seen in genomic coverage may be partially due to different binding affinities of diverse DNA extracts to the SNP chip array.