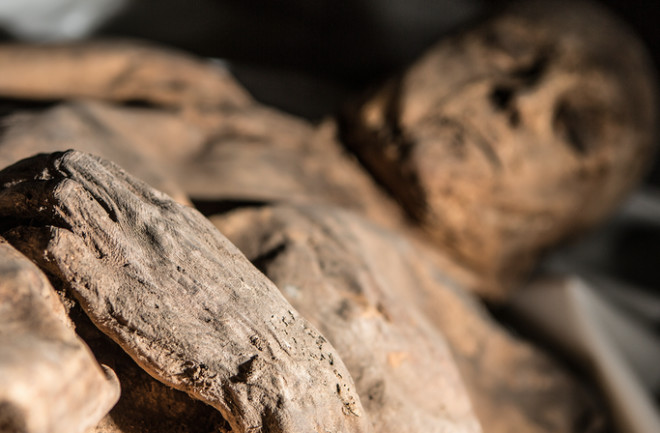 The child mummy the researchers drew their samples from. (Credit: Kiril Cachovski/Lithuanian Mummy Project) The oldest genetic sample of smallpox ever studied could rewrite the timeline for this deadly disease, which ravaged Europe and much of the world beginning in the eighteenth century. Using tissue samples taken from the mummy of a Lithuanian child dating back to the 1600s, an international team of researchers reconstructed the full RNA sequence of the smallpox virus strain that likely killed her. By comparing this genetic information to more recent samples, the team pieced together a phylogenetic tree that traces the history of the virus over the past few centuries. They say that a particular smallpox strain responsible for millions of deaths emerged only within the past two or three hundred years.

A History with Smallpox

While it is considered eradicated today, reports of smallpox infections go back millennia, and are based on anecdotal evidence and the the telltale scars the disease left behind on mummified bodies. The 3,000 year-old body of Egypt's Ramses V is commonly used as an early example of smallpox, due to the presence of lesions on his face. It was only around the 1700s that the disease really began to take a toll, however, helped by increasing urbanization and more mobile populations. The disease announced itself with a rash of small boils that spread from the face and hands across the body, proving to be fatal in around a third of those infected. The disease likely evolved from a virus harbored by rodents thousands of years ago and spread through human populations. When and how it jumped to humans is still unknown. Anecdotal evidence is not sufficient to make a case because there are several other diseases, like chicken pox and the measles, that leave characteristic pockmark scars in their wake as well. This means that skin lesions alone aren't enough to prove the existence of the disease.

Rolling Back the Timeline

Here, researchers attempted to push back the timeline of the disease as far as they could, and at the same time measure its rate of mutations to learn how fast it has grown and spread.

An engraved illustration of smallpox boils. (Credit: Morphart Creations/Shutterstock) Using the molecular clock derived from their samples, the researchers estimate that this particular strain of the virus originated sometime between 1588 and 1645 in Europe. Even more interesting: All of the modern smallpox samples they studied shared a common ancestry with this strain. That's a strong indication that the smallpox epidemic that began in Europe emerged relatively recently. If this particular strain of smallpox had been around for thousands of years, as previously suggested, there would be too much diversity for all of the strains found today to be related to a single sample taken in Lithuania. Their findings agree with contextual evidence from that period in history, as well. The 17th and 18th centuries were marked with widespread migration and colonization, both activities that would have helped spread the disease beyond an initial localized outbreak. The researchers also found that a major split in the evolution of smallpox occurred right around the time a vaccine was first developed. Just before the dawn of the 19th century, English physician Edward Jenner proved that inoculating people with cowpox, a related disease, served to protect against smallpox. This would kickstart a campaign to banish smallpox. As the fight against smallpox raged, the virus split into two major lineages: variola major, the more deadly strain, and variola minor. The emergence of a successful vaccine may have put enough selective pressure on the virus that a second strain took hold and thrived. While the researchers work allows us to trace the history of smallpox with much greater accuracy, it doesn't yet tell us exactly where the disease came from and when it first infected humans. The virus could have existed for years as an endemic infection in areas untouched by colonial expansion, or it simply persisted in different forms. The researchers hope to study other samples from Europe from the same time period as the Lithuanian child, or earlier, to learn more about the disease's history.