Chicken Could Go 'Round the World

The U.S. Department of Agriculture begins to allow imports of poultry processed in China. 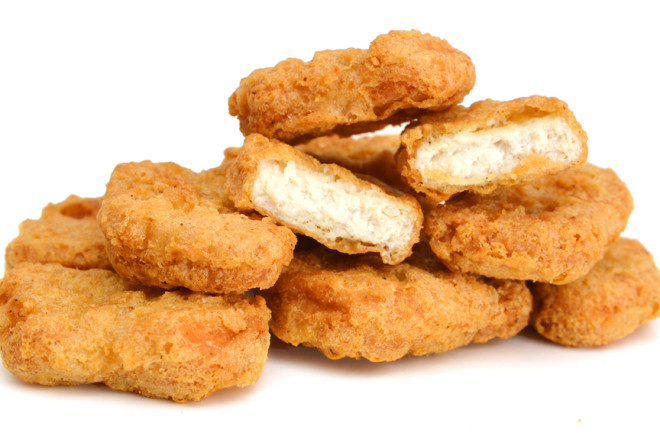 Chicken nuggets may soon log more miles than you realize: In September, the U.S. Department of Agriculture said it would, for the first time, allow poultry raised and slaughtered in the U.S. to be shipped to China, processed, and shipped back to be sold to U.S. consumers.

The move touched a nerve with a public already unsettled by repeated food safety scandals in China — notably, the discovery in 2008 that baby formula manufacturers there had deliberately laced their products with toxic melamine to lower costs, sickening thousands of children and killing at least six.

Nonetheless, food imports from China to the U.S. have ticked up, growing by 7 percent between 2009 and 2012. Between 2008 and 2011, Chinese imports made up two-thirds of the apple juice sold in the U.S., a third of its garlic and nearly 80 percent of its tilapia.

Some observers worry that the processing plants, while they passed the USDA audit, will slide back into substandard quality. Others worry the decision, which is widely seen as part of a tit-for-tat bid to open the Chinese market to U.S. beef, may crack the door to the eventual importation of chicken raised in China. That would require a separate audit of the slaughter process, says Chris Waldrop, director of the Food Policy Institute at the Consumer Federation of America, an organization focused on consumer affairs. But “it’s likely a next step,” he says.

No U.S. companies have yet publicly expressed interest in working with Chinese poultry processors. Should they start, Chinese-processed chicken won’t be something you can avoid by reading the package. Since the chicken will be slaughtered in the U.S., as well as cooked before its return, companies will not be required to reveal its overseas pit stop.

[This article originally appeared in print as "Chicken Could Go 'Round the World."]