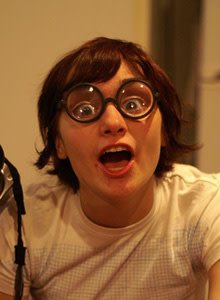 A retired physics professor is trying to bring clear vision to a billion of the world's poor. His strategy: eyeglasses with easily adjustable, fluid-filled lenses that cost just $1 a pair. His goal: distributing one billion pairs by 2020. The glasses would help schoolchildren learn how to read, fishermen to mend their nets, and women to weave clothing, he says. According to the WHO, there are about one billion people in the world who would benefit from vision correction, most of them living in developing countries. However, in places like sub-Saharan Africa, where people make less than $1 a day and there is roughly one optometrist per one million people, glasses are an impossible luxury. Josh Silver came up with the idea of fluid-filled lenses over 20 years ago while he was still a professor of physics at Oxford University. The glasses contain a clear sac in each lens that can be filled with silicone oil. Adjusting the power of each lens is as simple as changing the amount of silicone oil in the sacs, which can be done with a syringe through the arm of the spectacles (a process reminiscent of adjustable breast implants). Adjustments can be made by the wearers themselves and the power can range from -6.00 to +6.00 dioptre. The shape-changing lenses actually operate similarly to the natural lens of the eye, although in the eye, the shape of the lenses is controlled by muscles. Silver has been perfecting the technology, trying to bring costs down, and has started a company called Adaptive Eyecare to develop and distribute the glasses. Already, 30,000 pairs have been distributed in 15 countries. He is forming partnerships with humanitarian programs and governments to ramp up distribution to 100 million pairs annually within the next few years. Meanwhile, he's also tackling another concern: how to make the clunky glasses look less geek and more chic. Related Content: DISCOVER: Myopia's Bookish Ways DISCOVER: Not Your Father's Bifocals