Cardiovascular fitness is associated with cognition in young adulthood:

During early adulthood, a phase in which the central nervous system displays considerable plasticity and in which important cognitive traits are shaped, the effects of exercise on cognition remain poorly understood. We performed a cohort study of all Swedish men born in 1950 through 1976 who were enlisted for military service at age 18 (N = 1,221,727). Of these, 268,496 were full-sibling pairs, 3,147 twin pairs, and 1,432 monozygotic twin pairs. Physical fitness and intelligence performance data were collected during conscription examinations and linked with other national databases for information on school achievement, socioeconomic status, and sibship. Relationships between cardiovascular fitness and intelligence at age 18 were evaluated by linear models in the total cohort and in subgroups of full-sibling pairs and twin pairs. Cardiovascular fitness, as measured by ergometer cycling, positively associated with intelligence after adjusting for relevant confounders (regression coefficient b = 0.172; 95% CI, 0.168-0.176). Similar results were obtained within monozygotic twin pairs. In contrast, muscle strength was not associated with cognitive performance. Cross-twin cross-trait analyses showed that the associations were primarily explained by individual specific, non-shared environmental influences (≥80%), whereas heritability explained <15% of covariation. Cardiovascular fitness changes between age 15 and 18 y predicted cognitive performance at 18 y. Cox proportional-hazards models showed that cardiovascular fitness at age 18 y predicted educational achievements later in life. These data substantiate that physical exercise could be an important instrument for public health initiatives to optimize educational achievements, cognitive performance, as well as disease prevention at the society level. 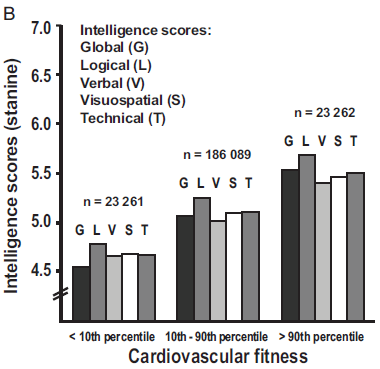 The figure to the left is pretty striking, though the general correlation between intelligence and overall health has been long known. I'm not too sure if I really accept that this correlation is as causal as they say it is, but it probably can't hurt to encourage for moderate exercise within the population. So even if this is another spurious correlation which leads to educational programs which don't have the effect intended (increase IQ), it wouldn't do that much harm, and perhaps might result in some good. Citation: Maria A. I. Åberg, Nancy L. Pedersen, Kjell Torén, Magnus Svartengren, Björn Bäckstrand, Tommy Johnsson, Christiana M. Cooper-Kuhn, N. David Åberg, Michael Nilsson, and H. Georg Kuhn, Cardiovascular fitness is associated with cognition in young adulthood, PNAS 2009 : 0905307106v1-pnas.0905307106.