There is a somewhat confused piece in The New York Times about eugenics for dogs today. I say confused because the article offers various cautions, but connecting the dots from the facts littered throughout suggest easily why the cautions aren't warranted.

One of the big issues lurking throughout the article is that of pleiotropy and correlated response, pretty important factors in directional evolution 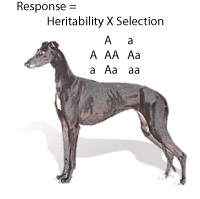 The logic is simple, if a gene, A, has a quantitative impact on traits 1-100, selecting that gene specifically in the context of trait 23 will have unforeseen consequences for the 99 other traits. Animal breeders have long dealt with this when they try to create a "better breed" by engaging in long term selection for one trait, only to generate so many maladaptations on other characters that reproductive fitness drops so low as to make the lineage nonviable (e.g., hyper-meaty chickens). But look what I said here: animal breeders have always encountered this problem! Knowing the underlying genetics behind the characteristic doesn't make it intrinsically more dangerous or frightening. In fact, knowing some of the fundamental genetic architecture a priori before selection might be better than the typical "shot in the dark" attempt at breeding. In particular this sort of concern seems very wrong-headed:

Many breeders hope this new effort to corral nature will weed out the numerous recessive diseases that plague purebred dogs after generations of human-imposed inbreeding. But some question the wisdom of escalating intervention. Mark Derr, an author who has written about the history of dog breeding, urges everyone to reconsider the goal of genetic purity. "I always use dogs as the example of why we don't want to be mucking around with our own genome," said Mr. Derr. "These people are trying to use DNA tests to solve problems of their own making."

Yes, there is a serious problem in regards to pure bred dogs: they often turn into freakish breeds because of inbreeding, and that inbreeding is generated in part by the "mystical" sensibility which genetic testing will overturn ("the blood must be pure!"). The reality is that breeders don't care about the total genome content of a dog, they care about salient phenotypic characteristics. If those characteristics can be found in a wide array of dogs through genetic testing, for example if they are coded by alleles masked due to recessive expression within the extant genetic background of the canine population, then one can eliminate the need for the inbreeding of a few select individuals by collecting together heterozygotes identified by genetic testing! Better living through genetics! In other words, this isn't anything new or qualitatively special. Rather, it is simply a sharper, more precise and informed version of what's been going on for thousands of years. The only major caveat I would offer is this: if this results in a frenzy of screening for single-gene characteristics of course maladaptation is going to result. Genes of large effect will by their nature likely have a lot of negative side effects, they are after all defined by a large footprint. In contrast, selection upon a host of genes of small effect, as might occur when you select in a gene-blind manner from a continuous trait within a population, might be less likely to perturb genetic pathways (repeated truncation selection would discard nonviable individuals, purging the genetic load). To some extent this hinges on the manner in which the relationship between mutations of large and small effect play out within the evolutionary genetic system. But please note, selecting for single-gene traits isn't new, genetic testing will simply allow an amplification the trend. Dog eugenics in the post-genomic era is different as a function of quantity, not quality. P.S. This did offend me a great deal: "I don't want brown," said Ms. Winters. "It's not my thing." She has no idea what she's missing out on!