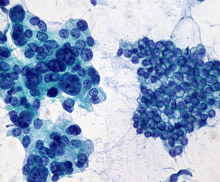 A promising target for next-generation cancer therapies might not be a target after all, according to a new study in Nature [subscription required]. The work calls into question the "cancer stem cell theory," which claims that a rare class of cells, cancer stem cells, are responsible for initiating and spreading cancer tumors. But by tweaking previous experimental procedures, researchers working with human melanoma cells in mice now report that cancer stem cells are much more prevalent that previously thought.

"We're not trying to claim there is no merit to the field, but we think that the frequency of cancer stem cells will be much higher," said [co-author] Sean Morrison... . "And there will be some cancers like melanoma where lots of cells will be tumorigenic and it won't be possible to treat those cancers by treating a small subset of cells" [Wired Science].

Cancer stem cells—so-called because they share genetic similarities with standard stem cells—were first identified in 1994 and since then have been reported in cancers of the brain, breast, colon, and pancreas. They provided a well-defined target for cancer drugs since they were thought to number only a few in a million.

Like evil relatives of standard organ-forming stem cells, cancer stem cells build tumors. It's an appealing idea because it provides a new, well defined target for treatment [Wired News]. However, not everyone in the field was smitten with the new theory.

Researchers agree that techniques used to identify cancer stem cells — sorting cells from a human cancer and transplanting them into mice — are not ideal [Nature News].

Even though the mice used in these experiments have weakened immune systems, they may still be strong enough to counter some of the transplanted cancer cells; thus, not all tumor-causing cells can be identified this way.

The latest work introduced human melanoma cells into a more severely immunocompromised mouse strain. Under these conditions, the rate of tumour initiation surged. In less immunocompromised mice, only 1 in 837,000 cells regenerated melanoma. In the new mice 1 in 4 cells did. [Nature News]. So cancer stem cells may not be so rare or different from regular cancer cells after all.

Co-author Tim Johnson said the findings are not a setback, but will put melanoma research on the right track with further investigations into the cancer at a molecular level [Ann Arbor News].

Several new cancer drugs being developed are designed to specifically attack cancer stem cells and prevent them from seeding tumors. But the new work might cast doubt on the premise behind this strategy, instead supporting more conventional therapies that block the proliferation of all cancer cells.

Cancer researchers say the new study underscores how little we understand about cancer on a fundamental level. "The reality is that cancer is an extraordinarily resourceful disease and every time there has been a new idea, people have seized on it to make it the big answer," [Morrison] said. "Cancer is resourceful enough that there isn't going to be a big answer" [Wired Science].