Can you tell if you're black or white? 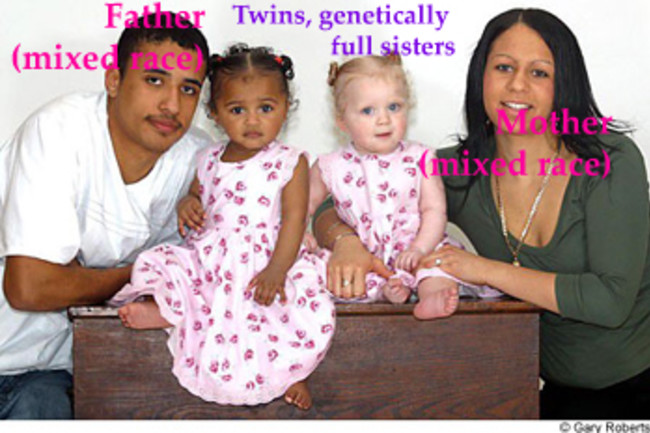 Last winter a story surfaced about "black" and "white" twins. As you can see by the picture the main difference is in skin color, though genetically full sisters (fraternal twins), one twin has the complexion typical of a northern European, while the other is darker skinned. Contrary to the news reports the darker skinned twin does not seem to exhibit the modal complexion of sub-Saharan Africans, rather, she is several shades lighter. In fact, the photo suggests that she is about the same color as her parents, who are both genetically 1/2 European and 1/2 black.^* Seeing as how adults are generally darker than they were as infants it is not unreasonable to assume that "black twin" will be darker than either of her parents by adulthood, just as her sister is lighter than either of them as a child (and will likely remain so). In any case, for the exposition below I will assume that one twin is "black" and the other is "white." In light of my recent posts about skin color, I thought this was an appropriate time to use this old story (which according to google remains popular) as an exemplar of Mendelian genetics beyond the single locus, that is, an exploration of variation on traits generated by a confluence of loci. The recent evidence suggests that about 5 loci are responsible for about 90% of the difference of average effect in regards to phenotype (i.e., skin reflectance) for skin color between populations (these are loci of "large effect").

This does not mean that these loci are as relevant for within population differences (or between sex differences within a population), as Europeans and Africans are often "fixed" for those genes in alternative alleles

(so when you see variation within Norwegians or Nigerians for skin color, that might be due to very different genetic dynamics which only come into play when the background is controlled for). Keep in mind that this exposition is focused on between population diferences, crudely, what makes us black or white (or, in my case, a rich and sensual brown which is magnetic to the female sex).^** OK, so, assume 5 genes control skin color. Each of the genes is independent and equivalent in effect. For simplicity, assume that each gene gives a dosage of "10 units" of melanin (skin color seems to covary with the density and size of melanosomes). The genes are additive across loci, and between alleles. In other words, there is no interaction between the genes, and, there are no dominance effect so that heterozygotes are exactly in between homozygotes in regards to phenotype for a given locus. The alleles for all the genes come in two variants, On or Off, equivalent to loss of function and functional alleles. Any one On allele contributes exactly 10 units, and Off contributes 0 units, of melanin. So, if an individual is homozygous Off for all loci they express 0 units and are white. Similarly, if an individual is homozygous On for all loci they express 100 total units and are black. How do we get 100? There are 5 loci, and, because humans are diploid, they carry two copies of each gene (two alleles at each locus). So: 5 loci * 10 units per locus * 2 alleles per locus = 100 melanin units.

Since I stipulated independence and additivity across loci and between alleles an individual who is heterozygous for On & Off on 2 loci and homozygous Off all the other and one who is homozygous for On at one locus and homozygous Off on all other loci are equivalent, at 20 melanin units of expression. Yes, this is all artificial, but please note that this rudimentary model is being constructed to give insight into the general dynamics at work here, not to be exactly faithful to all the details of the situation.

So what does this have to do with black & white twins? One can conceive of a white skinned person as pure loss of function, and a black skinned person as pure gain of function. In other words, black = all slots filled with On alleles, and white = all slots filled with Off alleles. The picture to the left shows the process in relation to the two mixed race parents and their offspring. A mother and a father each contribute exactly one of the two copies of each gene to their offspring. I stated above that a white individual can be thought of as pure Off, while a black one as a pure On. The implication is that when you have a black and white individual produce offspring their offspring will by necessity of segregation carry an On and Off copy at each locus, as their white parent will contribute an Off and the black one an On. So, we know that the mixed race parents are heterozygous on all the loci! This explains why they are about the same complexion, there can be only one combination of genetic outcomes in regards to a cross between alternative homozygous lines, the heterozygote one. But what about when the mixed race parents scramble their genes together? This is where it gets tricky. We can model this basically as a binomial process. A parent contributes 5 alleles. In the case above the parent has a 1/2 chance of either contributing an On or an Off for a given slot. You have the number of slots being n, and the probability of an On as the probability, p. So, n = 5, and p = 0.5, e(x) = np, the expectation of contribution of melanin units is 25 units from one parent. Since they are both genetically the same, you get 25 from both parents for a cummulative total of 50 units. In other words, just like the parents you expect the average child to be about 50 units of melanin expression. But what about the black and white babies? How did they come about? The expected value has a variance around its expectation. v(x) = npq for the binomial distribution, or, 100*0.5*0.5 or 25 units of squared variance. That means that the standard deviation is 5 units of melanin about the expectation, the standard deviation being a measure of dispersion about the central tendency of this probability distribution. In regards to the black and white twins, for the black twin the probability that a given slot is On is 0.5. From the father, there are 5 slots, and the mother there are 5 slots. So, 0.5^5 ~0.03125. You have to have this happen on the other 5 slots from the other parent as well, so multiply out the independent probabilities (or, just do 0.5^10, same result) and you get 0.000977 probability that a twin will be "black." The chance that a twin is going to be white is symmetrical, so multiple the two together, and you get a 1 out of 1,048,576 chance of one twin being black and the other one white. The only quibble I would have is that you have two configurations, twin a could be white or black, and the same for the other twin, so I'd double the probability here as there are two combinations, so 1 out of 500,000. In contrast, there are many ways to arrange the alleles in the 10 slots to obtain 50 melanin units, explaining why this is the expectation or modal value. Here is the probability distribution for the function that models the outcome based on the genetic architecture that I outlined above incrementing up 10 units of melanin from 0 to 100: 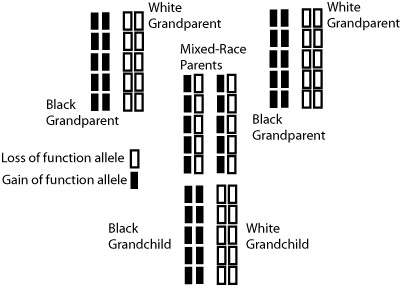 This makes sense in that it is symmetrical, the chances of expressing 0 and 100 units are the same, while the modal value is 50 units, dropping off away from the expectation. What is the take home message here?

Genetics is discrete, and variation is preserved, genetics is not blending!!!

If there is one thing that this blog holds to as a mantra, it is that genetics is not blending. This is of course a point we should take for granted in the "post-genomic era," the age of digital biology where the nature of the subject imposes a discrete framework, but theory and reality don't always match up. * If the parents' own black parent is Caribbean there is almost certainly some white ancestry from that side as well, though the expectation is closer to 5-10% than 20% as is the norm among African Americans. ** Though I'm religiously monogamous.