Can Training in Second Life Teach Doctors to Save Real Lives?

Medical training programs are springing up in virtual reality, and they may bring big changes to the way health-care professionals learn their craft. 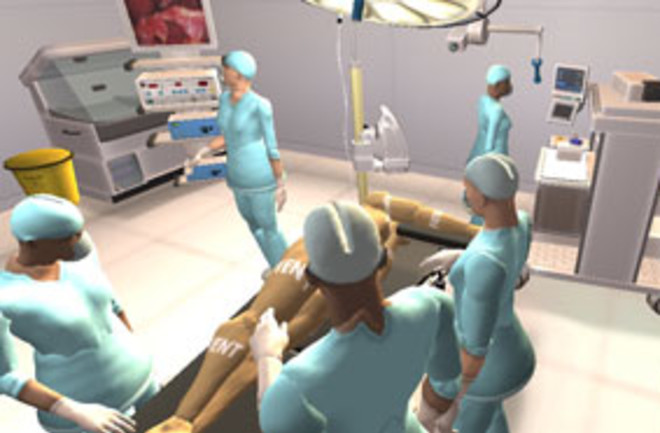 A nursing student walks into a hospital room where a woman who has just given birth is lying in bed. When the student asks how the new mother is feeling, she admits that she is dizzy, and might need to be sick. Preparing to examine her, the student pulls back the sheet and finds the mattress soaked with blood. The patient is experiencing a post-partum hemorrhage, and could bleed to death in minutes.

Instantly, the nurse scrambles into action—taking the woman’s blood pressure, affixing an oxygen mask, starting an IV. She calls for help, and her colleagues rush into the room, yelling back and forth as they assess what is happening and what needs to be done to save the patient’s life. After a few minutes of frenzied activity, the bleeding stops, the woman’s blood pressure stabilizes, and the team breathes a collective sigh of relief.

Then they put down their headsets and step away from their computer screens.

The scene is a simulation on Second Life, the 3-D virtual world in which users can create avatars and interact in realistic spaces and communities. Colleges and universities have been using the site to hold lectures and other learning activities, and now medical schools and other health-care training programs are following suit.

There’s the virtual copy of an operating room, part of Imperial College London’s virtual hospital, where students can learn their way around an O.R. before they enter the real thing. Or they can test their knowledge in the Virtual Respiratory Ward by interviewing patient avatars (usually professors or volunteers who are given scripts), ordering tests, diagnosing problems, and recommending treatment. In a program created at San Jose State University, clinical students can use the Heart Murmur Sim, which lets users listen to real cardiac sounds, training them to listen to a “patient’s” chest (an exam called a cardiac auscultation) and identify heart murmurs.

More and more training simulations are introducing complex scenarios in which students are given a lot of information and must make quick decisions. One such program is the MUVErs Medical Simulation which was launched in early 2009 by John Miller, a Tacoma, Wash., nursing instructor. It involves an avatar patient (a computer-generated character operating with a set script) who is experiencing chest pain and other symptoms. The student must interact with the patient, ask the right questions, and “use” equipment such as IV pumps, defibrillators, and medication to treat the problem.

For sims like these, students wear a heads-up display, similar to those used by pilots, which shows data like the patient’s blood pressure, heart rhythm, and medical history. Then they click on objects such as a medication dispenser or the controls of an IV pump. When an object is clicked on, it triggers another heads-up display, allowing students to select, for instance, a certain medication, the dosage, and how to administer it (by mouth, injection, etc.). Importantly, the patient avatar will react realistically—if the student gives him too much nitroglycerine, for example, the avatar’s blood pressure will sink and he’ll go into shock.

The postpartum-hemorrhage sim described above has been operating since January for nursing students at the University of Auckland in New Zealand. So far, around 20 students have used it, with overwhelmingly positive results. “After they’ve ended the scenario, the faculty sits down and talks about their decisions,” says Scott Diener, associate director of information technology at the university, who created the sim. “From a learning perspective, it’s the post-scenario debriefing that does more for the students than anything else.”

Granted, simulations are not new—they have long been a part of medical training. Hospitals often build operating rooms just for training purposes, and they use sophisticated patient dummies to teach students how to perform exams, measure vital signs, and other tasks. Computer models like CD-ROM simulations have also been in use for years at medical schools and other healthcare training programs.

Still, pro-SL educators argue that the era of CD-ROMs and dummies is over. “No kid wants to put in a CD-ROM and do a set sim—they want interactivity and social networking,” Miller says. “SL takes what’s great about simulations and gives them that social aspect. It’s more like real life.”

“The real innovation in SL clinical simulations is that they bring people together in a clinical space—you are standing next to an avatar who is a real patient, and the doctor avatar to your right is a resident at Massachusetts General Hospital and the nurse to your left is at the University of Pennsylvania hospital,” says John Lester, the Education and Healthcare Market Developer at Linden Labs, the company that created Second Life. SL can also give students greater access to experts in a field. “If there’s an expert in Brussels who is a specialist in a procedure that I want to teach my students, I can bring him or her into the virtual space to train them,” Lester says.

Students can also discuss their work, network, and compare notes in a way that isn’t always possible in real life. “When the staff left [the sim], the students often stuck around and continued to talk about the scenario and their experience,” Diener says. “A lot of our students travel from very remote locations, so this is a unique chance for them to socialize.”

Of course, arguably the most significant benefit of SL training is the cost. Real-life training facilities require thousands, and sometimes millions of dollars to build and maintain, not to mention travel expenses for students and faculty. For example, Dartmouth Hitchcock Medical Center in Hanover, N.H., built a state-of-the-art training facility with rooms, dummies, equipment, and software. The price tag? Over $2.5 million. The sophisticated mannequins used by medical schools cost hundreds of thousands of dollars each. But SL simulation rooms can be created for minimal costs, and accessed from anywhere in the world for the price of an Internet connection.

“[Officials at Dartmouth Hitchcock] say, ‘the biggest challenge is getting people here’” to use the real-life facility, Lester says. “You have to travel to New Hampshire to use it. Moving around in the physical world is expensive and the biggest obstacle in medical training.”

Critics have pointed out that there are plenty of unanswered questions about health-care education in SL, and that little empirical research has been done to see if it really works. For their part, schools with SL programs are slowly but surely gathering data on the virtual world’s effectiveness. At Imperial College London, David Taylor, director of virtual worlds and medical media in the Department of Biosurgery and Surgical Technology, has been doing his own research: “We tested [the virtual O.R.] in a controlled experiment on 40 first-year medical students prior to their first visit to a real O.R. We wanted to determine if [the SL program] gives them more confidence before their first exposure to the real thing. We’ve found it is just as effective as the training O.R. in the physical world.” Diener says that his surveys of medical students show that their emotional reactions to medical crises in SL are very similar to the ones they have to real-life simulations.

Diener also emphasizes that SL can expose students to situations that a standard academic program can’t duplicate: “[SL] is not about creating an automated teaching environment. It’s about giving students experiences we can’t give them otherwise, because it’s impossible or unsafe. For instance, if I’m going to examine a Muslim woman, her husband will be in the room, maybe even standing next to me. How do I teach students to deal with that scenario in a classroom?”